The madness of The Madness of George III.

A rose of a performance hidden by the vines.

Sunday marked my second visit to Shaw Fest 2017, this time to see the much-anticipated Madness of King George III by Alan Bennett. This is the first season under the artistic direction of Tim Carroll who is on some kind of mission to completely erase any trace of former director, Jackie Maxwell. 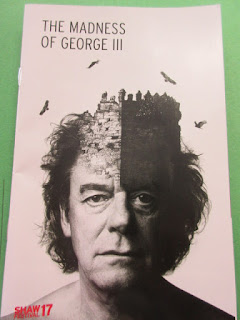 We are going through a period of overindulgence.  It starts innocently enough by staging a 19th century costume drama in the present day. I'm good with that. However, let us not discuss the modern staging of Macbeth--Africa at Stratford Festival. We then bring characters on stage to interact with the audience while they take their seats followed by audience participation and before you know it, the house lights are up for 2:45 hours and you're paying more attention to the on-stage audience than to the actors.

In describing the new season's philosophy, Carroll uses the analogy of a garden, giving full license to directors to express this philosophy and continue throughout the season to revisit the play and see how things evolve (grow). As one reviewer noted, very few of us are likely to see a play twice in one season.  And isn't the purpose of previews to iron out the kinks? Isn't that why we have preview pricing?

Sadly, this production has evolved into a panto. Panto is at best ludicrous comedy, frivolous farce, and ramshackle antics.  All descriptions found in the following reviews.

Nestruck at The Globe and Mail

Smith at The Hamilton Spectator

Over-staging detracts from the fine performances given Sunday night in particular McCamus' king. McCamus is good as is Mezon and McManus--three of my favourites. What were they thinking when Mr. Kevin Bennett laid out his ideas for the show?

I do not pay for the privilege of seeing actors (and I hear Withnail here) reduced to prancing around the stage having to endure three costume changes in under a minute. I kept coming back to the movie where George's decline was allowed to unfold with grace.

I should be fully engrossed in the performance in front of me. Keeping the house lights on all night merely encourages people to read programs and examine their feet throughout the evening. Just like the people on either side of me. It really messes with the peripherals.

Good rule of thumb: don’t take off your shoes and play with your feet, good people.

More on the rules to come.

Let's see what Shaw Fest does with An Octoroon.  Until September.