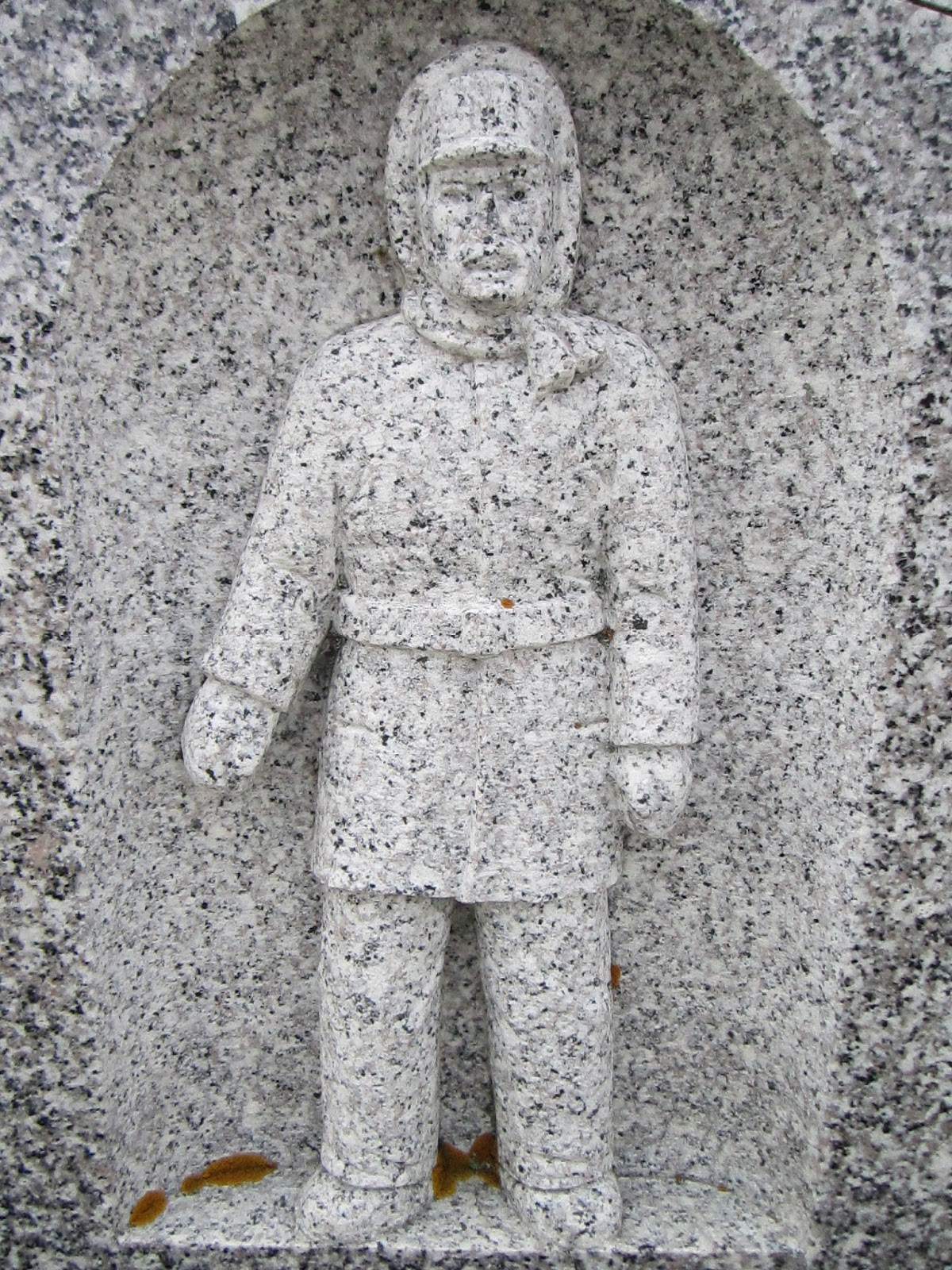 
After another restless night with the industrial press going full bore across the parking lot, I took comfort with the leftover pizza at breakfast.  Press conference on the G20; the constant analysis of what your country achieved, if anything.

Toured the Widget Maker facilities in the early morning and met a few more people. I welcomed the opportunity to have a look 'round. Questions were not expected but I did nod in all the right places.  It seems there had been many visits to Hamilton at one time or another but all anyone remembered was the industrial skyline from the Skyway Bridge.  There have been some changes and there are better, more picturesque ways to get into the city. 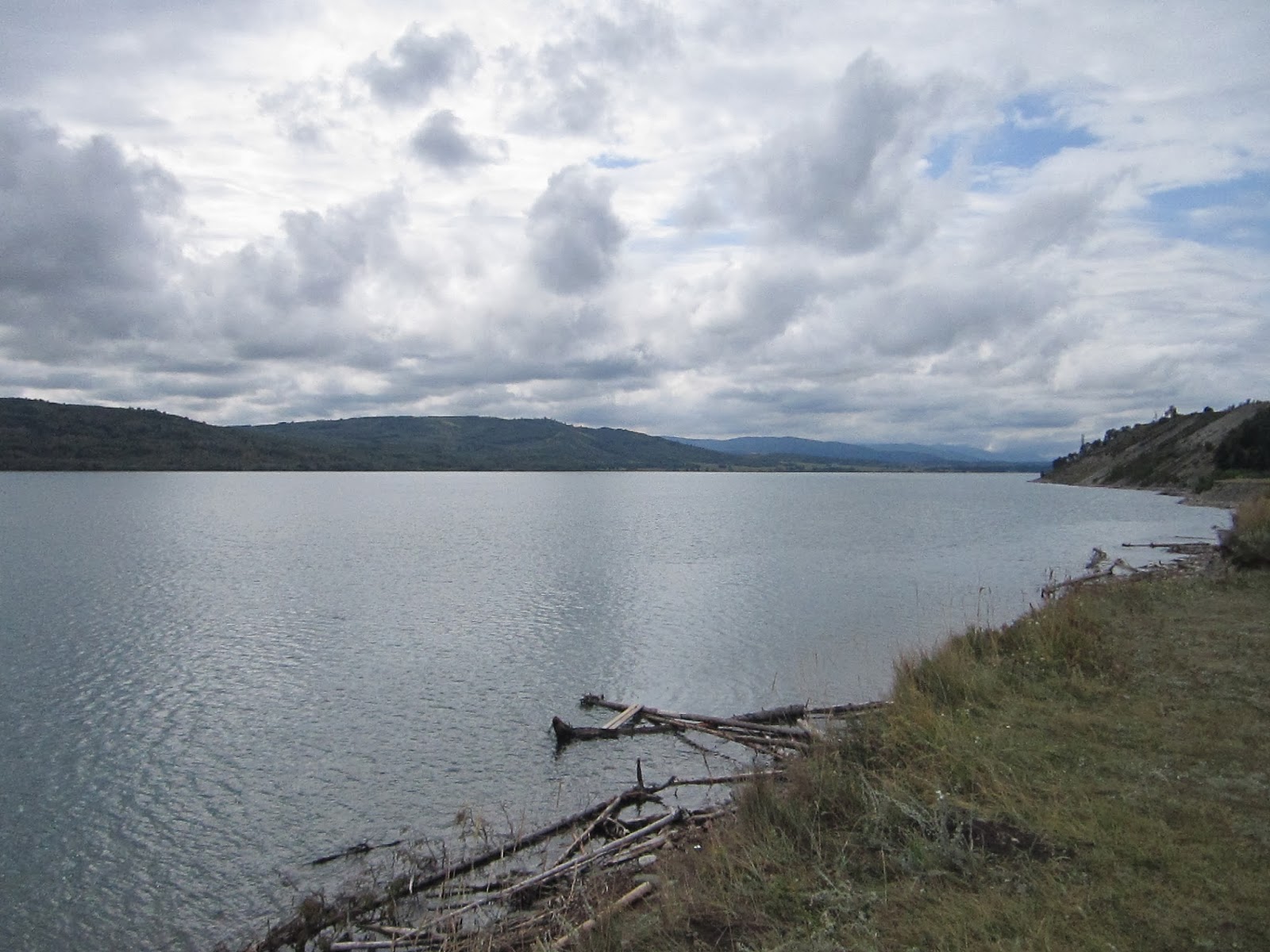 Snook up the 1A and pit stopped in Cochrane.  The steady drops of rain tapped out a little morse-code to my bladder; I had to stop and take refreshment. Cochrane looks like a theme park with its facades, mercantile, art studios, restaurants and the ubiquitous kitchen store.  I had tea at Home Quarter which is part tea room and part vendor of all things Western.  The leather and suede contrast nicely with the floral walls, chairs and prints.  Excellent scratch soups and sandwiches.  Decided against the chaps, for many reasons. 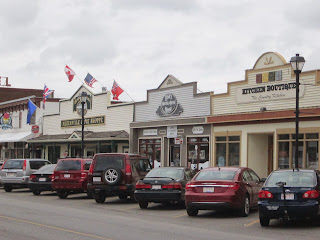 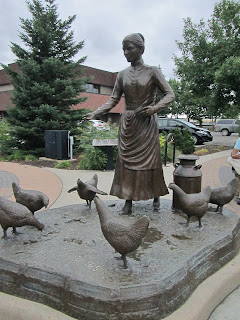 Toured Just Imajan and had a chat with artist Janet Armstrong.  I’ll let her website speak for itself.

Off to Morleyville, site of a 19th century mission led by George McDougall.  As I approached the site, the Gloria Mass kicked into high gear and I took a moment to enjoy it.  The church is situated on an open, wind-swept parcel of land just up from the Bow River. McDougall was out walking in the depths of winter when he got lost in a snowstorm and succumbed to the elements; he’s buried on site.  Going forty miles out of your way would be easy enough to do; I looked around and there is nothing for miles.   The history of the site is well documented along with the early archaeology. It takes about half an hour to do a full tour. 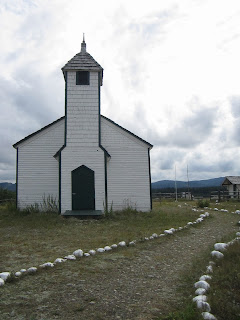 Downtown Banff is a Western version of Niagara on the Lake; one shop after another with a restaurant thrown in every half block.  Not being a keen shopper and as it was raining, I headed for the Banff Springs hotel. 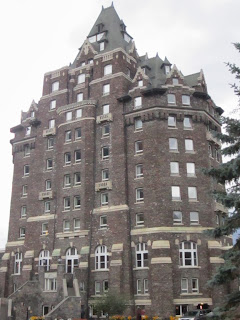 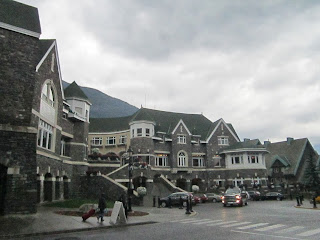 Dating back to 1888, the Springs offers just about everything tourists could want.  It's a cross between Scottish Baronial and Von Trapp.  We had the Swiss look at Lake Louise, here your hosts have a touch of Bavaria in the costumes. There is vast network of cavernous rooms, ante rooms, hidden alcoves, terraces, restaurants and lounges. 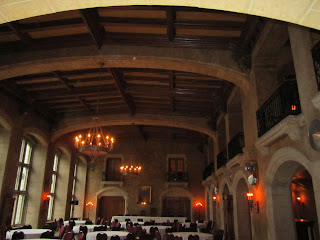 The two-flights-of-stairs climb from the Rundle Lounge was a damn site more manageable than the Tea House at Lake Louise.  Went with Afternoon Tea but declined the optional DOM at sixty-five dollars a glass.  Started with a palate cleanser of berries followed by sandwiches of avocado cream cheese & cucumber, prosciutto w/fig, smoked salmon crostini & egg on croissant. Desserts were scone, chocolate cake, éclair and chai crème brulee.

Here’s a very dark picture of my view; pity about the heavy cloud cover.  Pity I don’t play golf, either. It was a very civilized afternoon. 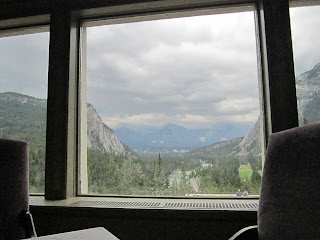 The hotel is a veritable warren and you could spend the day wandering its corridors and taking refreshment at the many restaurants and lounges.  I was reminded of Women In Love where the men take after-dinner wrestling in front of a great hearth; true Greco-Roman wrestling, not this silly modern business.  Love the movie.

It was Royal Mail back in the day. 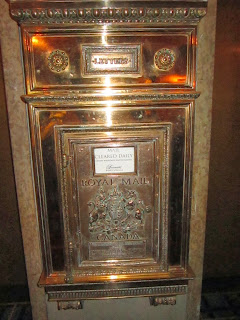 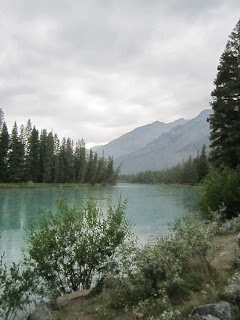 Still raining as I pit stopped along the Bow.  Looked to be a very busy weekend ahead for the town and good luck to anyone trying to find a parking spot. Thought the car had been towed at one point.  I came back down a different road and the No Parking signs had gone up for tomorrow (unbeknownst to me).  Where the hell was the car?  My feet were drenched from the rain and I was in no mood to deal with a potential parking violation.

Drove back to town through a monsoon. I did mention how civilized drivers were on the Trans Canada however on this stretch of #1 it seems it is customary to do at least 140kmh during white-out rain conditions.  Slowing down is indeed frowned upon.

I had a reservation booked for dinner at CASSIS, but it took all my willpower to put myself together.  To dry off only to return to the down pour?  After driving through a stretch of restaurants, I reached what seemed like no man’s land. Had I gone wrong again? No. Much to my surprise.

I heard Cassis before seeing it as the front door was wide open giving the little space some much needed ventilation. There were a lot of people and owing to miscommunication, my seat was at the bar. It’s not quite sardine-like atmosphere; I suppose some would call it cozy.  A bar seat is OK if you’ve got something to look at, but, this is a very small bar and also serves as the coffee station.  All you’ve really got is a wall and the occasional flash of barkeep.  A silent French film loops on the far wall of the restaurant.  I was looking forward to this meal all day and I was a little taken aback by the talking, the music, the movie, the cold air drifting in through the open door not to mention that bar stool where my toes only just reached the foot rest.  That aside, the food was very good.  And the courses were nicely paced.  Cassis has a loyal following and it's easy to see why.

“It’s poisson.”  Peter Greenaway’s The Cook… presents a different kind of French table where dishes are served to a discerning clientele.  The exception being Albert and his cronies.  Albert is not to be crossed.

What else but a Pimms Cup to start? And at last, steak tartare complete with egg yolk.  Delicious. Cassis is run by two brothers who are South France ex-pats.  They are going for simple food in the classic French tradition mixed with a little local flair.  The go-to dish is duck breast and it’s served with scalloped potatoes served in their own little pot.  I don’t like mash or scallops served in a blob on the plate.  Since there is always room for dessert, chocolate mousseline it was; a cross between mousse and crème caramel. Lovely.  Another two and a half hours well spent. 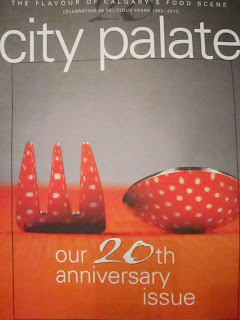 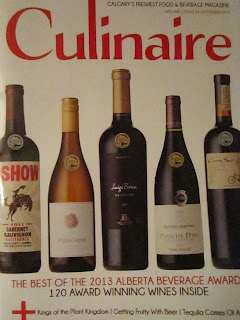 Back to the hotel and time to start loading the car for the off.  Made a couple of trips and was distressed to find Sid & Nancy in the parking lot;  such anger and rage.  He threatened to blow his brains out; she screamed at him to stop saying that.  They both erupted in tears, ruing the day they met. He threatened to put a gun to his teeth, she begged him not to.  It was endless.  What do you do in a situation like this?  Hardly the night cap I was looking for.  Things went quiet and there they were walking calmly into the hotel.  I thought they’d just pulled in to the lot to have a fight.  No, they were guests.  What kind of place am I staying in??  But that’s a situation that’s going to stay with you the rest of your life because like the movies above, the violence is cyclical.  By the conclusion of Nil By Mouth, it’s all happy families even though he put her in the hospital.  There they were admiring the new decor with the bruises a distant memory.  What is to become of our young heroes?

Until next time.  Saskatoon bound.