Let me explain about the alcohol.  The good people at the LCBO recently profiled several Toronto mixologists.  It was a Dark Horse based cocktail that I was after.  Dark Horse is produced in Alberta and when in Rome…  Buchanan’s are purists; they don’t do cocktails.  Not wanting to start a meal with a single malt, I opted for the Negroni.  Is there a consensus on how to make this?  I don’t think so.  Buchanan’s barkeep feverishly flipped through his copy of the New York Bartender’s Guide and produced a very satisfying drink. But I’m getting ahead of myself.

Today we were bound for Lake Louise.  From the log cabin of 1890 (built by the Canadian Pacific Railway) the hotel has morphed into the present day multi-winged Chateau.


﻿﻿﻿﻿﻿﻿﻿﻿﻿﻿My morning view was a little more humble; hardly Forster-worthy.  But if you squint real hard, you can see Calgary in the distance. To the right is an industrial estate.  Three days at the Chateau and I’d bloom.  Remember Alan Benet’s Joyce from A Private Function?  “Put me in a long frock and surround me with sophisticated people; I’d bloom.” Or something along those lines. 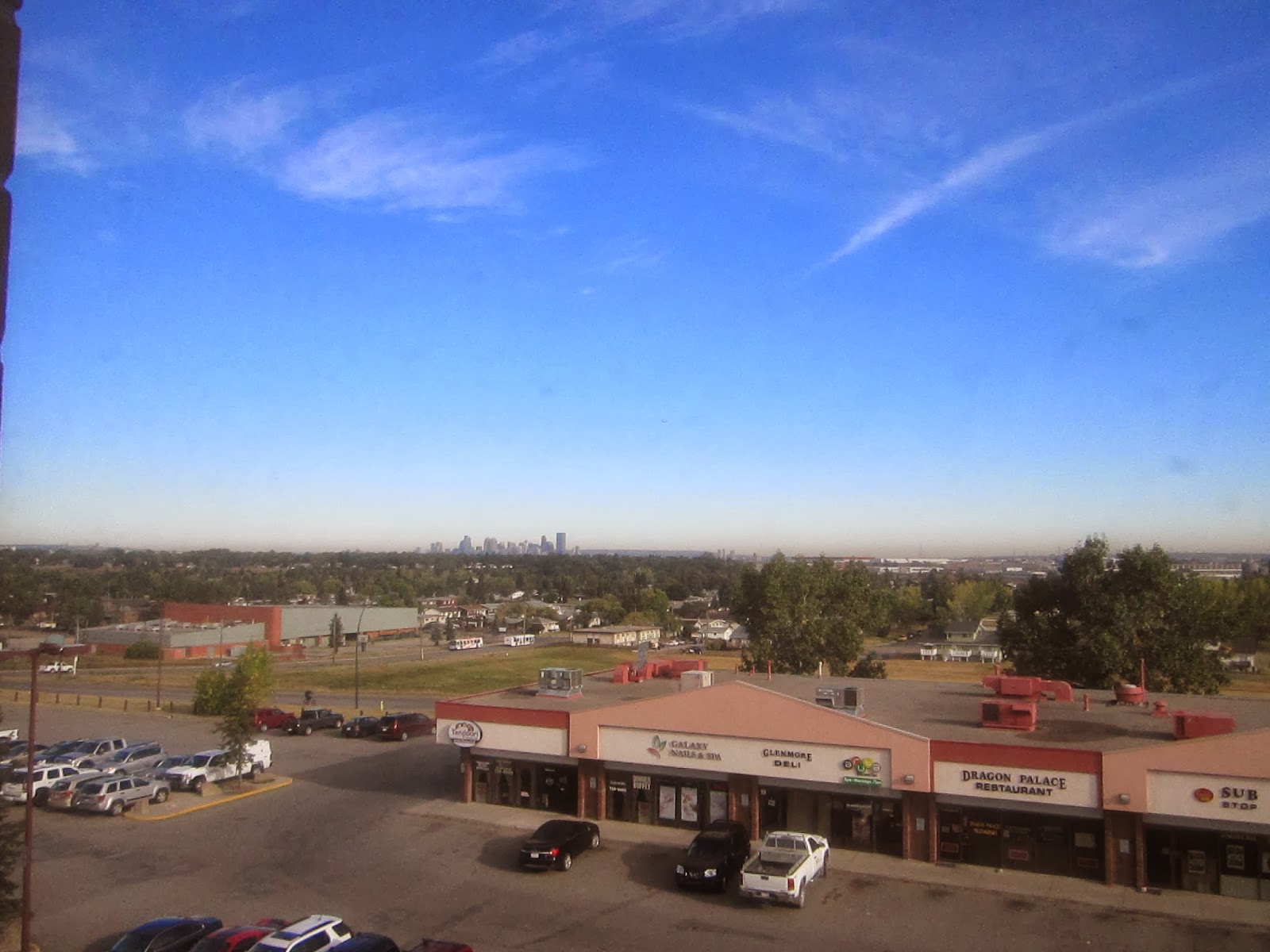 But first- getting to the hills. Awoke to the strains of a Neko Case-esque singer on Mid Morning Mojo.  Excellent music.  CNN and BBC going head to head, first with the Ariel Castro death and then the G20. Remember I don’t have cable so I soaked up a little along the route. Downed the coffee and made my way Northwest to Canmore.  Oh, the roads.

What do you think of when you read Crowchild Trail or Deerfoot Trail? Meandering through the well-worn lowlands on horseback?  Ranches?  Grazing cattle?  Idyllic countryside?  Not quite.  The “trail” network is a series of eight lane concrete speedways.  Congestion, tailgating, unexplained weaving; exits that come up out of the blue;  drivers oblivious to everyone but themselves.  Since no one stops on red or slows down in construction zones, the City has instituted a camera system.  Beware the flash!  Apparently it can take months before you get your fine and by that point, you’ve quietly forgotten about it.

After a couple of premature turns and a few drives through suburban shopping malls, the 1A looms large.  This is a two lane road that does meander through rolling country side.  And, yes, there are cattle ranches.  Oh, the quiet.  Ahhh.  Quarries and Lafarge blast sites dot the road but are, for the most part, nicely concealed behind the forest. These mountains are only the baby hills.  The real thing takes another hour’s drive.  The coffee and breakfast shake were in deep conversation with my bladder and a pit stop was necessary.  Found Good Earth Coffee House & Bakery which turns out to be a chain.  Beamed ceilings, painting and photography on the walls and live music set it apart from the usual coffee spot.  The almond crusted, chocolate stuffed, buttery Danish was fabulous and it was followed by a banana Frappucino of sorts.  Does Starbucks have a claim on Frappuccino?  I resisted the urge to get a second Danish, but regretting it now.

If you’re like me, your knowledge of Canmore extended no further than Royal Air Farce’s “I’m Mike, from Canmore.”   This is your typical town that has grown to accommodate the tourists.  But the architecture and colour scheme is consistent and the mountains are allowed their place. There is a ski lodge feel.  Pleased to find two hours of free parking.  You won’t find that in Niagara Falls.  Found Café Books Ltd.  Purveyors of local prints, jewelry, books and so on.  Good browsing spot.


﻿﻿﻿﻿﻿Drove on through Banff National Park; the scenery reminding me of Deliverance.  A fishing trip that turns ever so slightly sour.  I imagined the canoe drifting along the river below; inside it, the lone survivor.  I was going to go with The Discreet Charm of the Bourgeoisie because they never get to their dinner, either. The fencing you see runs the length of the road and it’s designed to keep the wildlife in.  Roadkill has been reduced by eighty-five percent.  And those overpasses, they are for the animals, not you.

Lake Louise is where Swiss Alps meets Rockies.  Foodie goal today was the Tea House at the top of a three and half kilometer climb.  A steep climb.  I started my ascent at two o’clock on a hot afternoon, two hours after the coffee and pastry; this on top of three days of driving on what seemed like a steady diet of coffee.  Now, was this wise?  Was I in any kind of shape to attempt this?  I started off poorly as I gave it my usual walking pace.  Wrong.  You need to take this steady.  Septuagenarians and women of considerably larger girth than me glided up the hill.  I rested at the first available rock and then carried on.  I rested again and a couple offered me water.  Did I look that bad?  I didn’t see a defibrillator anywhere and my chest was pounding.  Was I on the verge of a coronary?   After much thought, it was decided that the Tea House would have to wait.  I offer the picture below as my only proof of my attempt.  If you look carefully through the trees, you can see the “progress”.  I’m no longer lakeside. Thirst like a camel but Afternoon Tea at the Chateau will have to wait; I was sweating like a pig.  Know thy limits.


You’ll notice the Thirst within a day or two of driving West.  Started at 246ft above sea level and was presently at 3,857ft.  So I blame the elevation as well as the grade.  You just cannot slake the thirst no matter how much water you drink.

Took respite by the lake and helped out a number of families by taking their picture.  Most couples must get home with duplicates of everything; he’s on one, she’s on one. Lots of visitors, but it’s manageable.  If you sit quietly, the right moment for a photo will present itself.

Relaxed and did a little people watching.

After a relaxing drive back, I had to strategize on getting into downtown.  How difficult can it be?  As we’ve seen, racetracks and one way systems work to keep people like me out.  The thing is I live in a city that’s full of race tracks and one-ways and things go very smoothly.  CAA book in hand, I planned the route.  Little did I know that there are in fact TWO maps and TWO lists of restaurants, using the same numbering system.  After much ado and a trek through northern Calgary, my journey came to an end.  I had a vision of a cool, refreshing beverage and meal that required the use of both knife and fork.  I was presented with spicy lobster dumplings followed by ginger & wasabi salmon.  My taste buds were beside themselves.  Never mind the mountains, I had a plate of hot food in front of me.

The drive out of town equalled the drive back.  I returned a shell of my former self and had to break out the Bombay.  I thought of the Sisters Brothers.  They would have been quite at home in Deliverance country.  They would have got up that hill, arm or no arm.  I hit the pillow like the boys did upon returning to the homestead.  But, wait what is that noise?  It sounds like a large I-Beam being dragged across the parking lot.  Or is that the sound of sheet metal being torn in two?  I picture a car being driven under cover of darkness, lights extinguished.  Someone receives the car; no words are exchanged.  What is in the car?  Something that needs to be disposed of quickly and efficiently.

Until next time.  The French are coming!