People Watching-Soo to the 'Peg

The dull thump of water pressure from beyond the wall served as my alarm.  It was decided to go with mid-range accommodations and even within a chain of hotels there is a great deal of variation from province to province. I hesitate to even use the word hotel with one of them, details of which will be forthcoming.  A nice B&B would be ideal but you need time to settle in to a B&B; at least three days. So in the end went with Best Western, Best Western Plus, The Glenmore Inn, and the Choice Hotels. We are not, after all, spending the day inside a hotel.  I am now a master of twelve different alarm clocks. 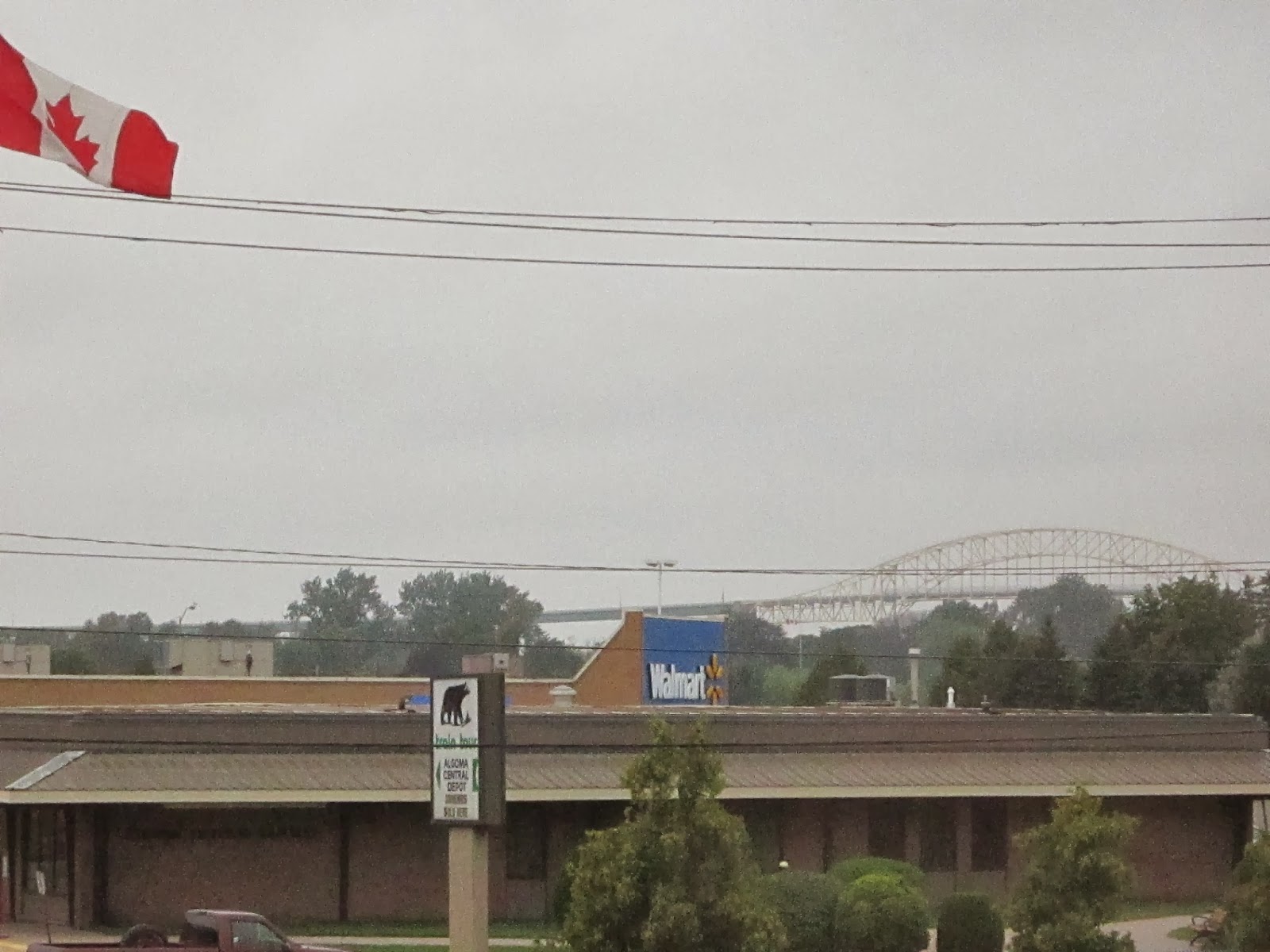 The water pressure aside, a Quality Inn is not bad at all.  The Soo location affords a splendid view of a Walmart and the International Bridge.  The irony being that at the time of travelling up here, Walmart had announced that it was going to single handedly get the US economy back on its feet.  By building more stores to which they import Chinese goods?  I’m patronizing them, though.  Has anyone been in a Target since the unveiling?  I’ve been in three times and it’s been desolate each time; myself and two others.  Curious to see what will happen at Hallowe’en and Xmas.


After the usual breakfast starters, I turned my attention to the hot bar.  Bacon and scrambled eggs in copious supply. I don’t buy bacon so when it’s offered (and cooked right) I dive in.  Besides, I’d just enjoyed a bowl of BRAN so this took some edge of the guilt.  A young boy of about seven approached the table.  “Bacon!” he exclaimed.  Although it was obvious, I asked if he was a bacon fan.  “We’re bacon heads!”  Good to see kids embracing breakfast.


Now you’d think that being part of a restaurant, the breakfast room would offer guests china plates and stainless steel cutlery.  Paper and plastic it was.  Have you tried to cut bacon with a plastic knife?  Go with your fingers.  It was agony to watch a twenty-something take fifteen minutes to eat a carton of yogurt.  I’ve seen others tackle yogurt; it’s excruciating; like watching things in slow motion.  The pots are smaller than they used to be so maybe people don’t want to show themselves up by going back to the counter for seconds.  Hence, the long ordeal for the rest of us.  I digress.  Tea is always a bit of a challenge and restaurants need a little science lesson.  Fresh boiled water is essential for properly brewed tea.  “Hot Water”, as the sign claims, won’t do.  If you trust your guests with a waffle maker, then surely you can trust them with a kettle. Hmm?  Returning in ten days to the hotel at the other end of the street and we’ll see what they can do with a hot breakfast.


I actually managed to leave before checkout time.  Think the same girl was on the front desk-long days.  Note the one way streets and make sure you don’t turn onto oncoming traffic as one motorcyclist nearly did.  It was a fine morning and ideal for pictures.  Will be having a wander ‘round town next week. You will need patience with the traffic lights as you’ll be sat at a red for an eternity.  There is work afoot to get us interacting with lights. 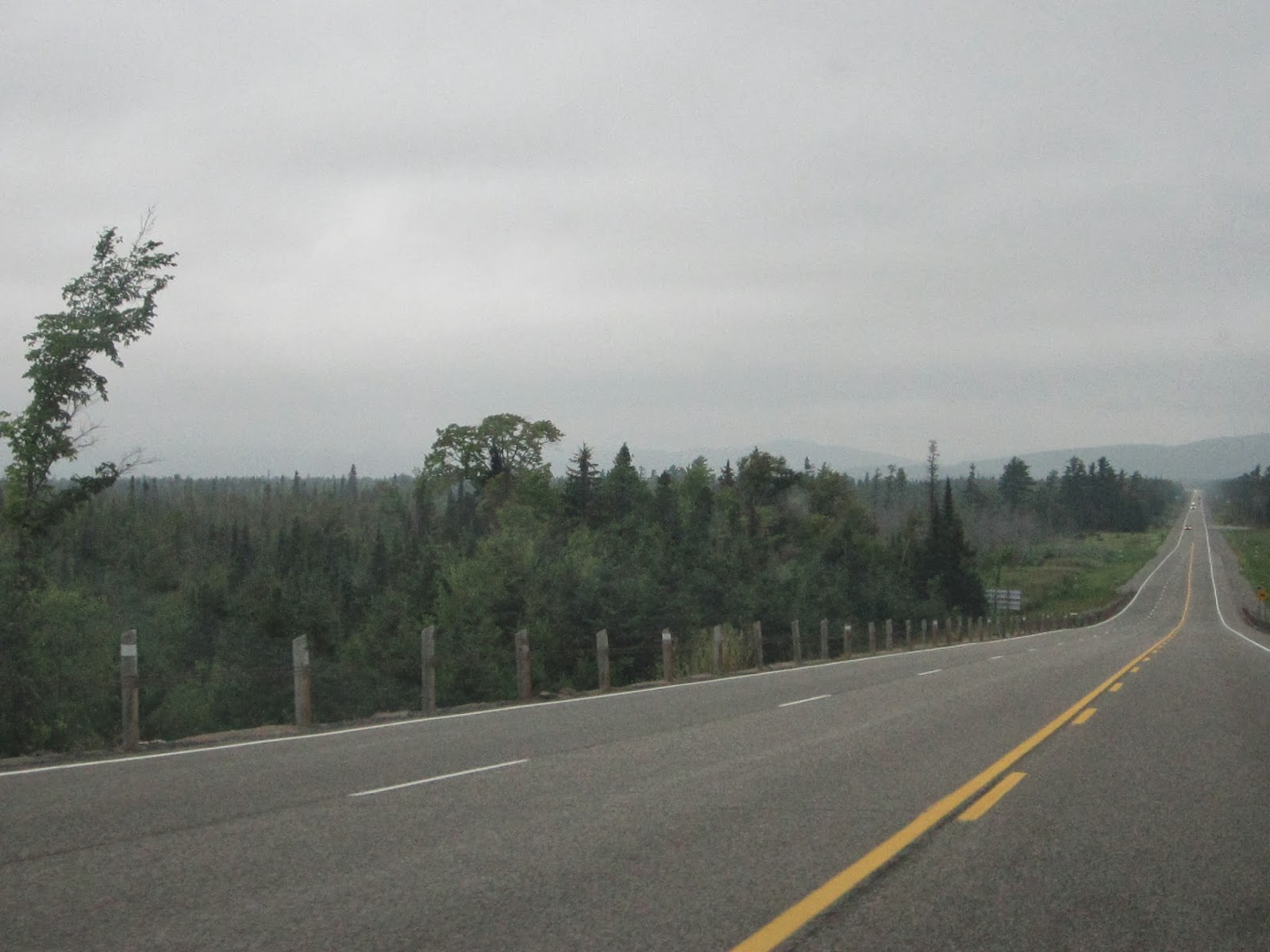 Bagel #1. It is essential to pit stop just outside of Wawa to gas up and take a Horton’s break.  Do not underestimate the size of Lake Superior.  Apart from the odd motel with a gas pump, there are no Services on this route.  My initial sources pegged the trip to Thunder Bay at fifteen hours.  It’s at least twenty from Hamilton.  Fifteen is doable but when you get into twenty two hours with stops, not so doable in one.   Young’s General Store offers gas and they carry just a little bit of everything inside.  Look for the large Canada goose just outside of town. 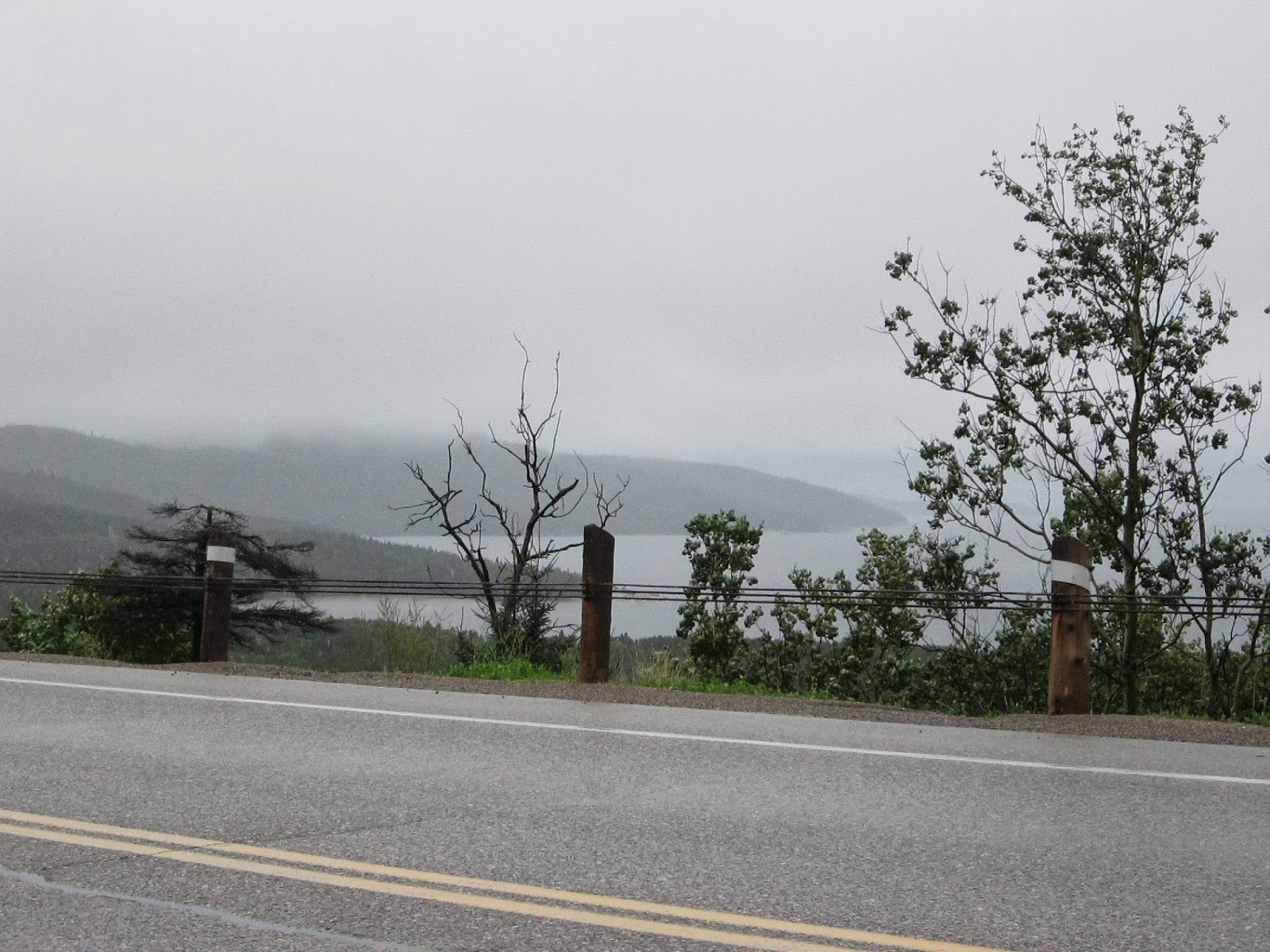 Heavy rain and I was less than enthusiastic.  But through the rain drops, the scenery is quite marvellous.  This is hiking country so do keep an eye out for pedestrians.  Lakes, rivers, creeks, waterfalls, and rock-everything has a little sign attached.  There was a little touch of Fall colour and it would be great to come back up month end to see the progression.  Eventually, the tree line is taken over with dense evergreen.  There are ten Provincial Parks between Soo and Thunder Bay. 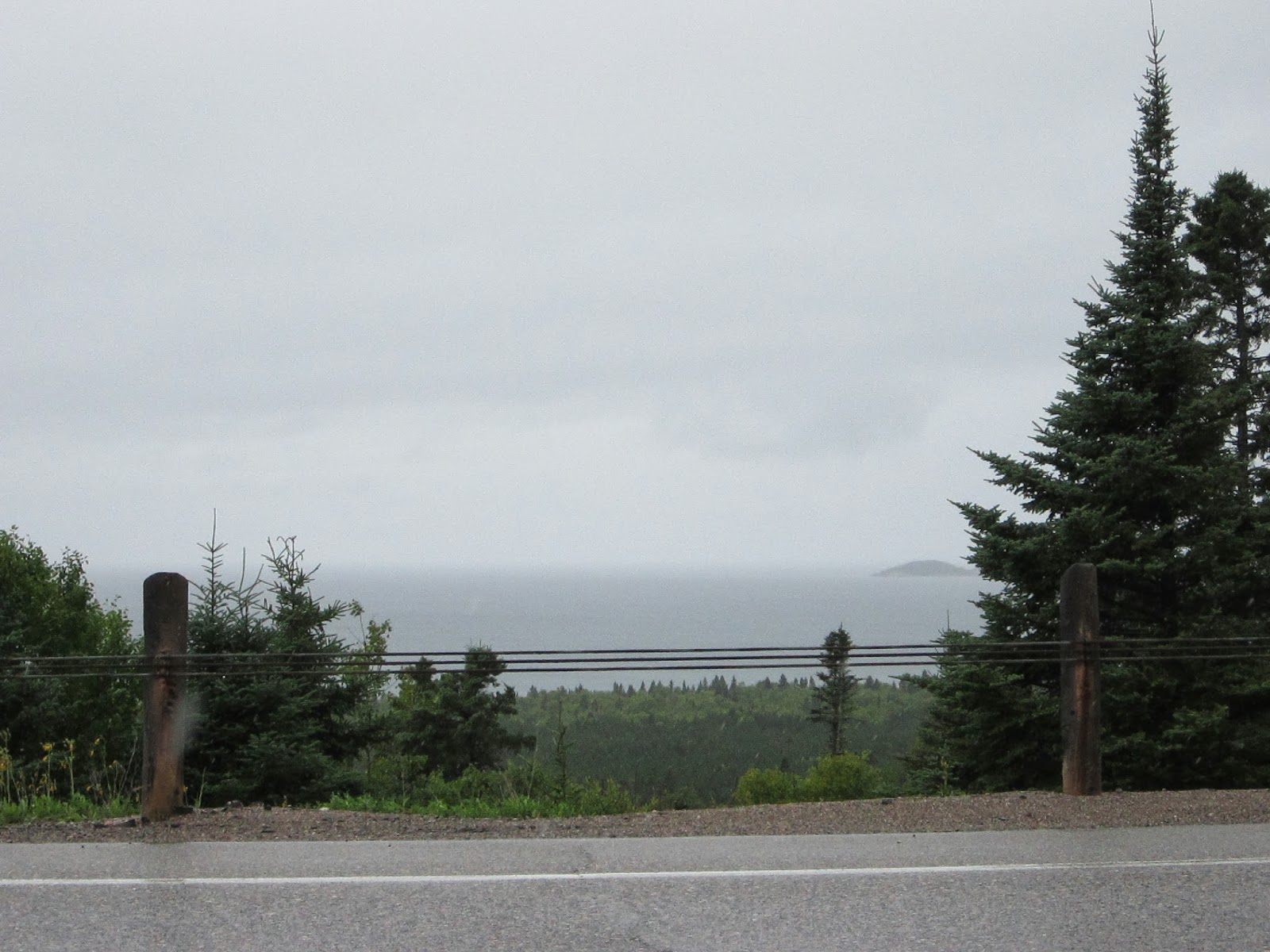 I have long laboured under the expectation of heavy industry-steel mills and mining from Sudbury to Thunder Bay.  And let’s face, most Canadian films usually (or did) paint a pretty grim picture of life in the North.  It’s not the case at all.  It’s the quiet that you first notice.  So when you’re standing on a rocky cliff overlooking Superior take a moment to absorb the quiet.  A woman stopped to take in the lookout, umbrella in hand.  “We’re not going to let a little rain spoil our day?”  A boy was down in the bushes picking berries. 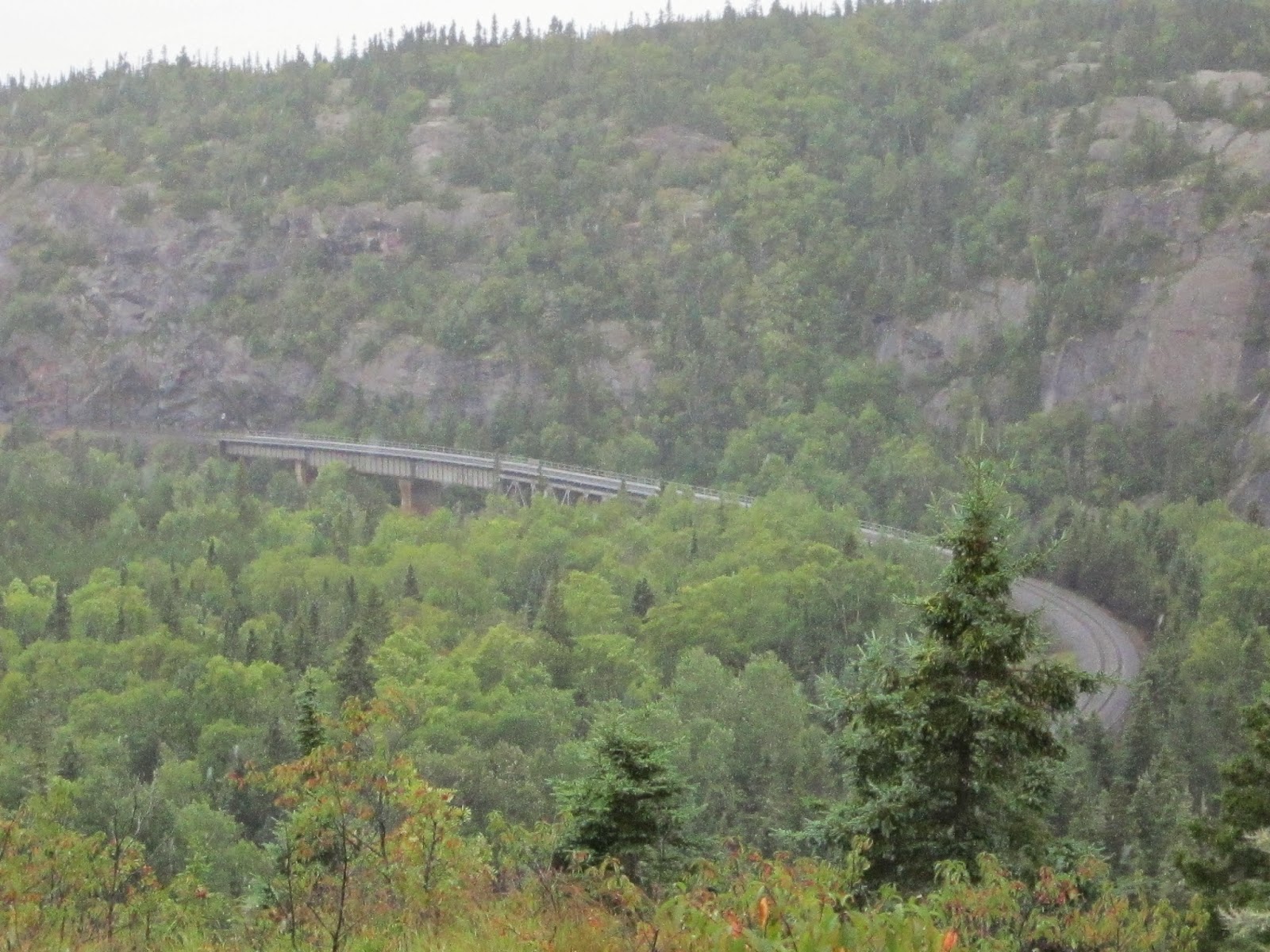 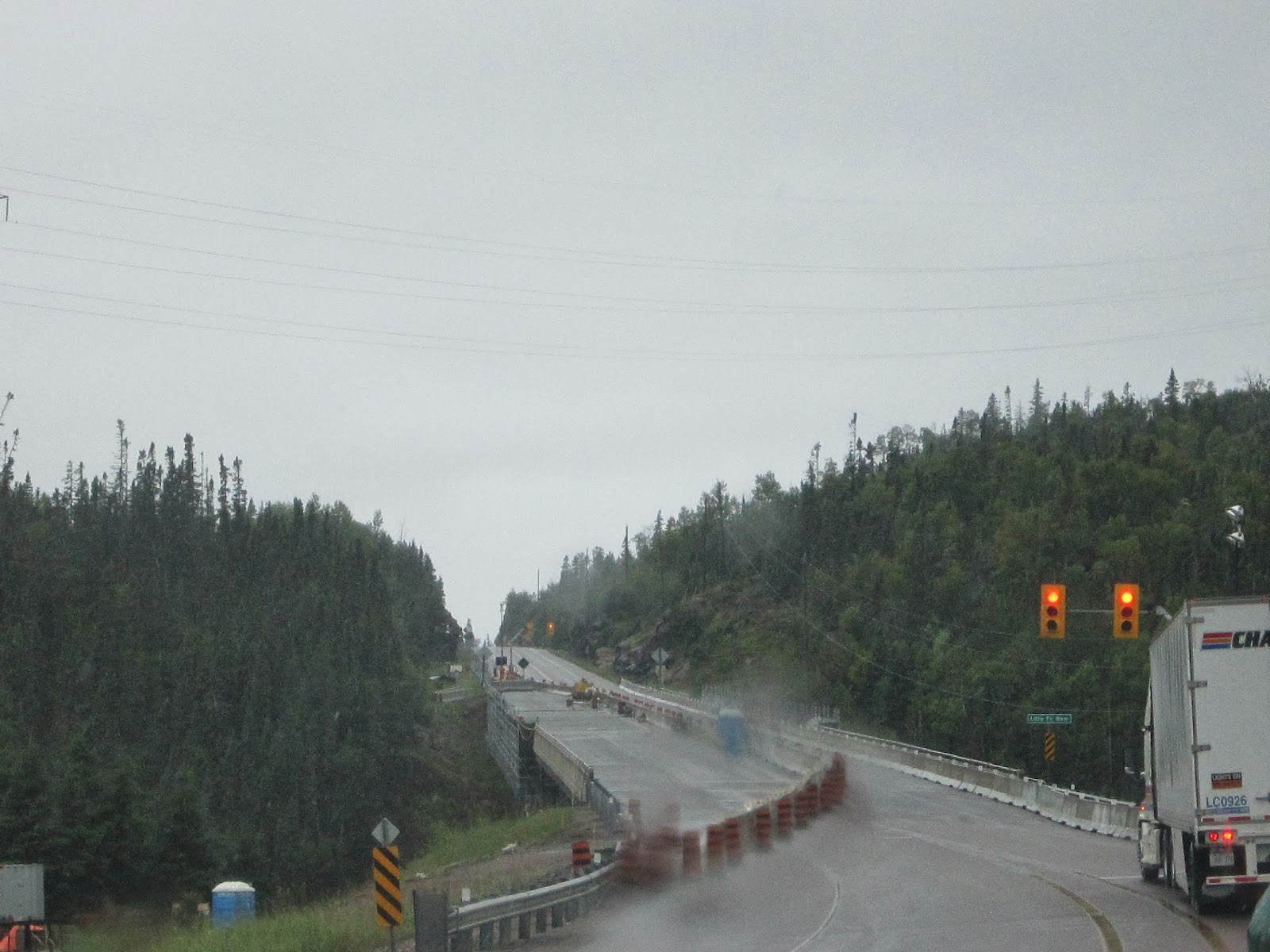 Progress was slow as this was bridge repair season and we’re now down to 70kmh and one lane across the bridge.  Lots of bridges.   Waiting for a 53 footer to get in gear to take on a hill demands your patience.


12 PM and time for Vinyl Cafe.  Story exchange from a reader who had undergone a similar Statistics experience to Dave’s daughter.  The writer was listening to that story when she was pulled over for speeding.  In her letter, she explained how she told the officer she’d just been listening to Vinyl Cafe and it turns out the officer is a fan, too.  The fine was waived. At this point, the temperature had dropped, my windows were fogging up and I was heading down a steep hill.  And lo, a police car appeared in my mirror.  I had crept up on the speedometer in my preoccupation with the defogging.  I thought to myself, I wonder if he’s a Vinyl Cafe fan.   Would I be able to write to Stuart McLean? Would I write about my encounter with the police while listening to his story about a story?  As it turned out, quotas had to be met as this was a long weekend.  But I did fare better than expected and I still had money in the bank for some rather nice meals later that week.  My letter to Stuart will have to wait.


Do keep an eye on your speed; the kmh is not consistent in this part of Ontario. 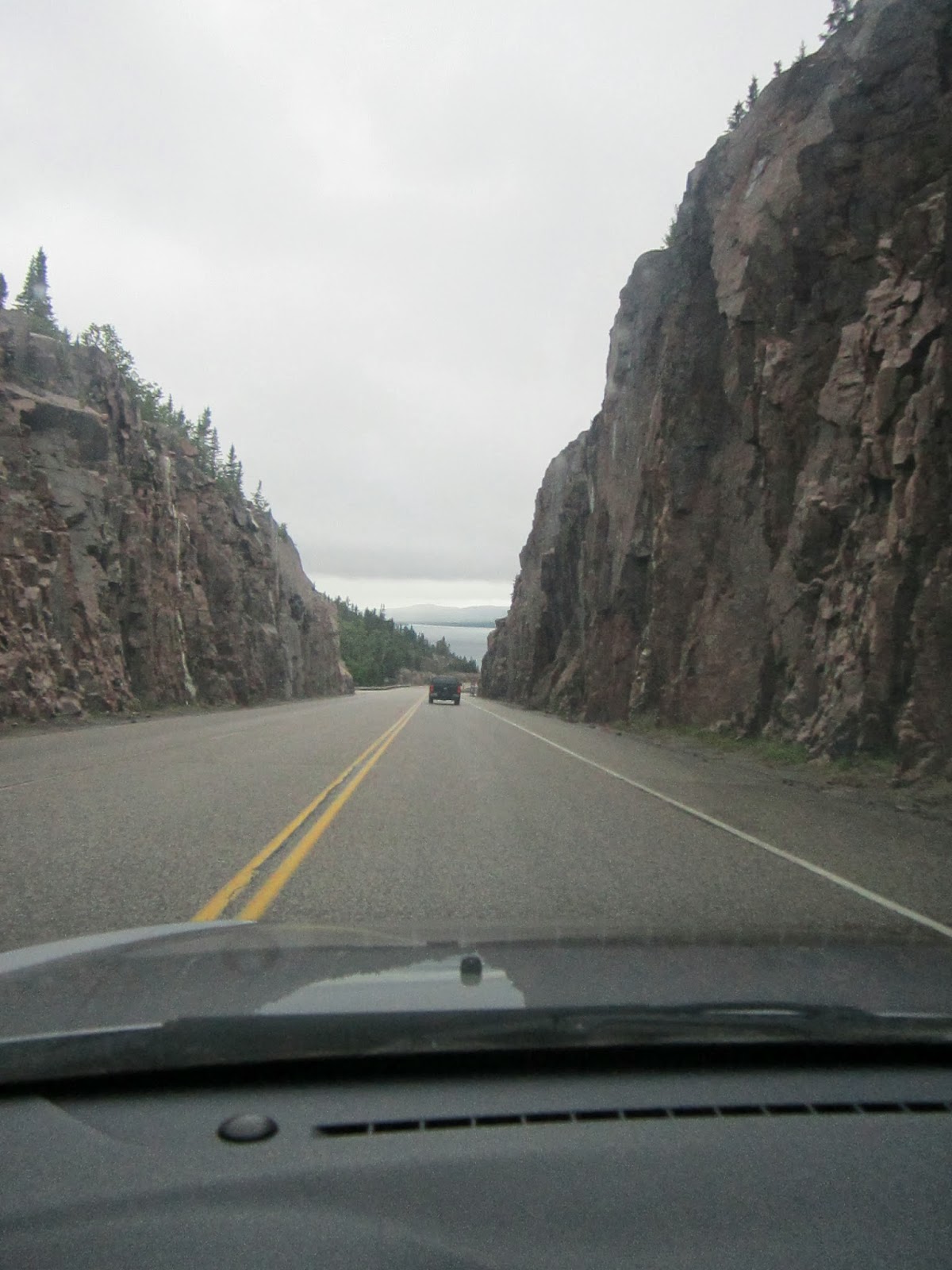 Unfortunately, I was unable to capture a lot of the scenery.  Sometimes there is just nowhere to pull over (no verge or median) or it was pouring rain and foggy.  This is why you have to set up camp for a few days and get out on foot. This is not U-Turn country.  Pancake Bay, Nipigon Bay, Black Bay and finally Thunder Bay.  I was in fleece by this point.  It was bloody freezing and the wind was a cold one.  I had a cooler full of salads, boiled eggs, cheese sandwiches and ice cold water.  What I needed was hot soup.  I settled on a mass-produced burger which sat heavy.  Onwards.  If you take the south exit out of the city you’ll join Highway 61 which wends its way South out of Canada and through the US to Louisiana.  Don McKeller stars in Highway 61.  There’s a touch of that Northern bleakness I mentioned earlier. McKeller’s character helps transport a corpse (boxed and strapped to the roof of his beloved car) to New Orleans meeting a cast of eccentrics  along the way.  Good film.


The decision to press on to Winnipeg was not undertaken lightly.  I actually made good time.  Would I do it again?   Advise on taking the extra day.


The moose warnings can cause panic is some people.  First it’s a NEXT 2KM warning sign (with the white beady eyes) then it rapidly jumps to NEXT 30km.  I avoided moose but had a close encounter with a deer that was going to take a stab at getting across the highway.  The attempt was abandoned at the last second.


Our merry band of vehicles began its slow ascent through English River, Dryden and Kenora.  The end was in sight.  At this point you have to take the music up a notch.  Yo Yo Ma and his cello would lull you off the side of the road.  After the exceptional Martha Wainwright, the evening calls for Billie Holiday. Perfect 7PM music. Then it was ABBA and ELO.  Never been able to sing along with Abba;  I cannot manage the pitch.  Enjoyed both screen and stage versions of Priscilla, Queen of the Desert.  ELO is a little easier to sing along with; we need more piano and strings.


The flatness is the first thing you notice and downtown Winnipeg looms in the distance like some spaceship.  But stay off the Ring road or you’ll wind up in some northern industrial park at 1:30 AM on the eve of a long weekend.  A sign appeared for a town that does not appear on the map.  “I’m not even in Winnipeg!” I blurted.  I lost the city.  Not many people can say they lost Winnipeg.  Where did I go wrong?  My Garmin had never heard of the street I was looking for and I abandoned it.  Eventually I made it back to the core.  Ah, the one way streets of downtown.  Looks harmless, but…


Tanked up and made enquiries with the manager. I was not on North/South as thought.  But how could it be East/West?  Apparently the manager had heard it many times before.  From there, lodgings were easy to find.  “We’ve been waiting for you.”  Took the extra hour checkout and after taking in the Pea Soup odour and garish green walls, cracked open the crab and olives and had a nibble.  An hour and thirty five minutes to find my hotel.  I ask you.  One thing, though, I had gained an hour with the time zone so that’s something.


Until next time where I ask, "Might one see the sun?"