I was wrenched from sleep and tried to fathom where I was.  Was that a bomb? No, merely garbage collection on Labour Day. What would the Local have to say about this? Upset that I couldn’t even get a lie in on a national holiday, I stumbled down to breakfast.  The Econo-Lodge breakfast room is in stark contrast to the Quality Inn’s dining room. Shocker of shockers, no boiled eggs in plastic serving dishes! Avoid the muffins. It’s a one-man show here and the day manager, Jeff, was doing double duty on front desk and kitchen detail.  For enthusiasm, welcoming manner and helpfulness, I give him ten out of ten.  Spoke to a woman from Oregon and a family of Francophones.  There is a large French speaking population in Manitoba and there are two separate signs for everything; your tax dollars at work.  What are we spending on bilingualism, anyhow?


Loaded up the coffee mug and then the car. Overcast and humid; reminder that I need to get rid of the bones.  Yes, the rib bones had travelled the 1400km, too.  One more day and they would walk off by themselves.  Bit of a chat with Jeff, who upon hearing where my next stop was, said, “Ooohhh, there’s not much in Regina.  A casino, maybe, but not much else.”   But, Winnipeg always seems to be defending itself, too.  We’ll see what Jeff’s city has to offer next Tuesday. 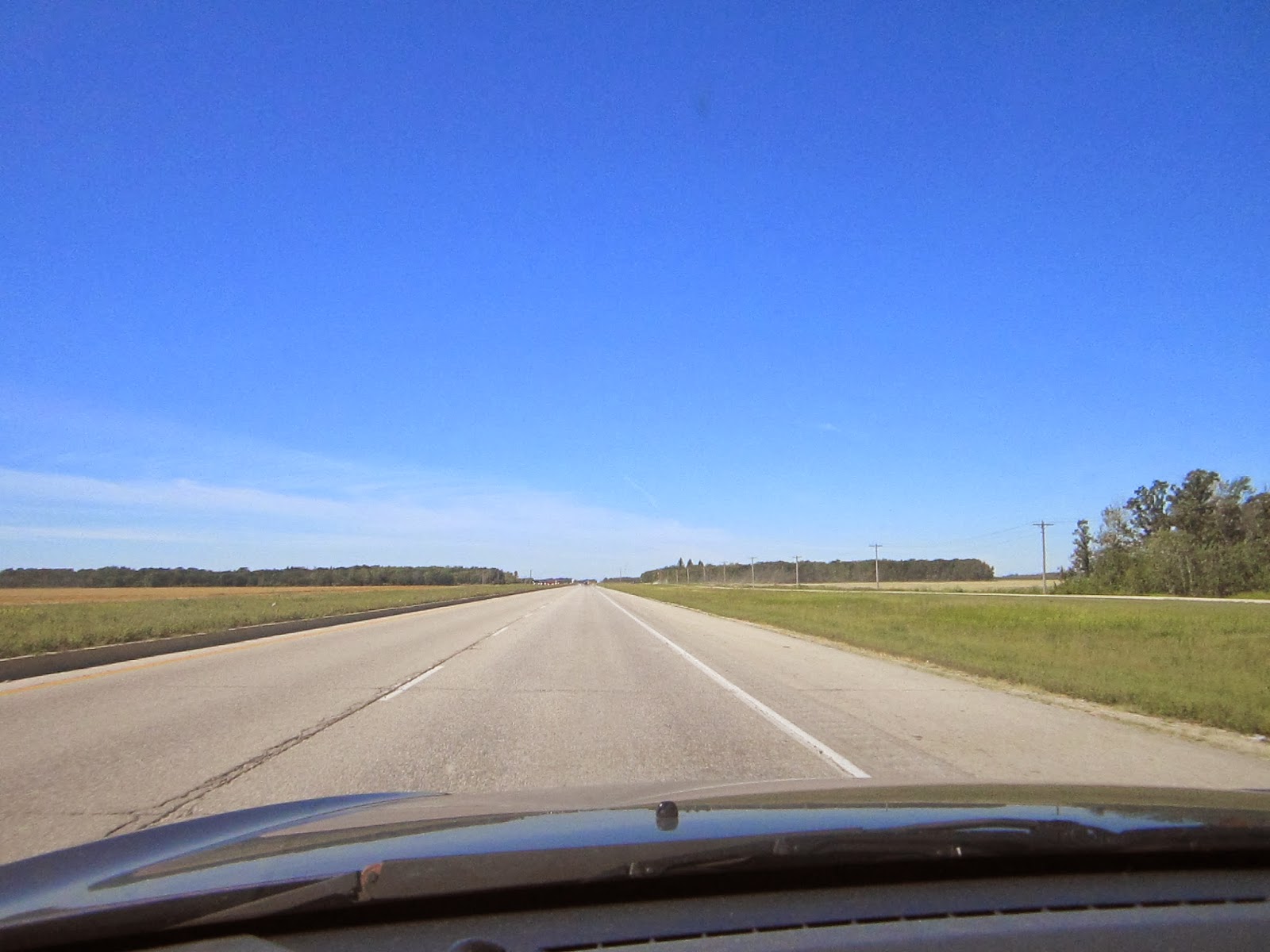 Getting out of the city was a damn sight easier than getting in.  The flatness does throw you off; there’s so much sky.  Enjoying the fact that this is the Trans-Canada Highway but there’s hardly anything on it.  Need to pull over?  Pull over.  Need to turn left?  Get into the left lane and turn on to the median.  There are no off-ramps and overpasses because someone’s farming the land right up to the roadside and even the stretch of median yields a good harvest.


Pleased to report that the sun finally showed itself.  Harvest time and there was industry in the fields. 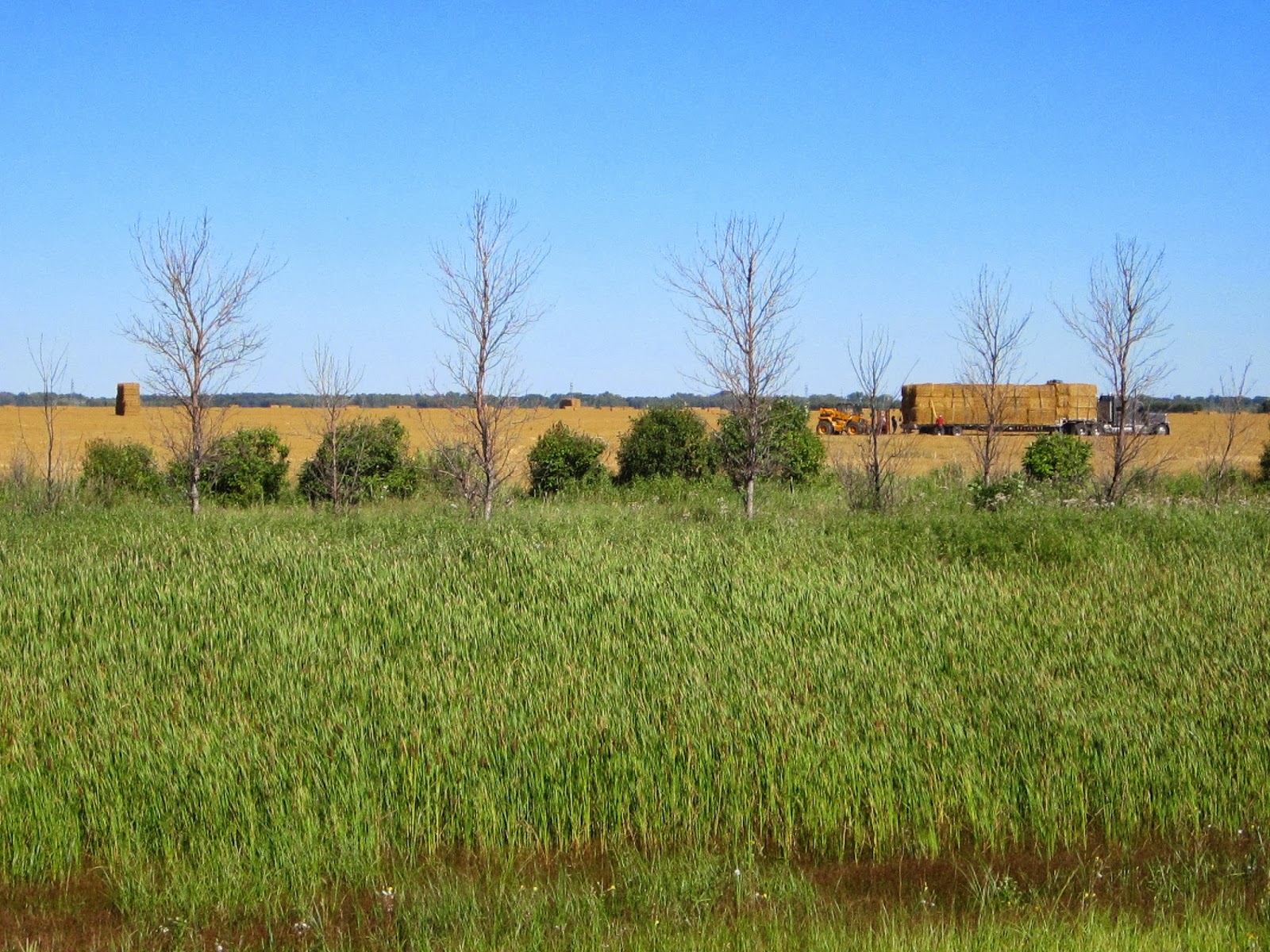 
Of course you don’t have to pull into a cemetery to get peace and quiet.  The silence is everywhere and it’s important to pull over and get out of the car. 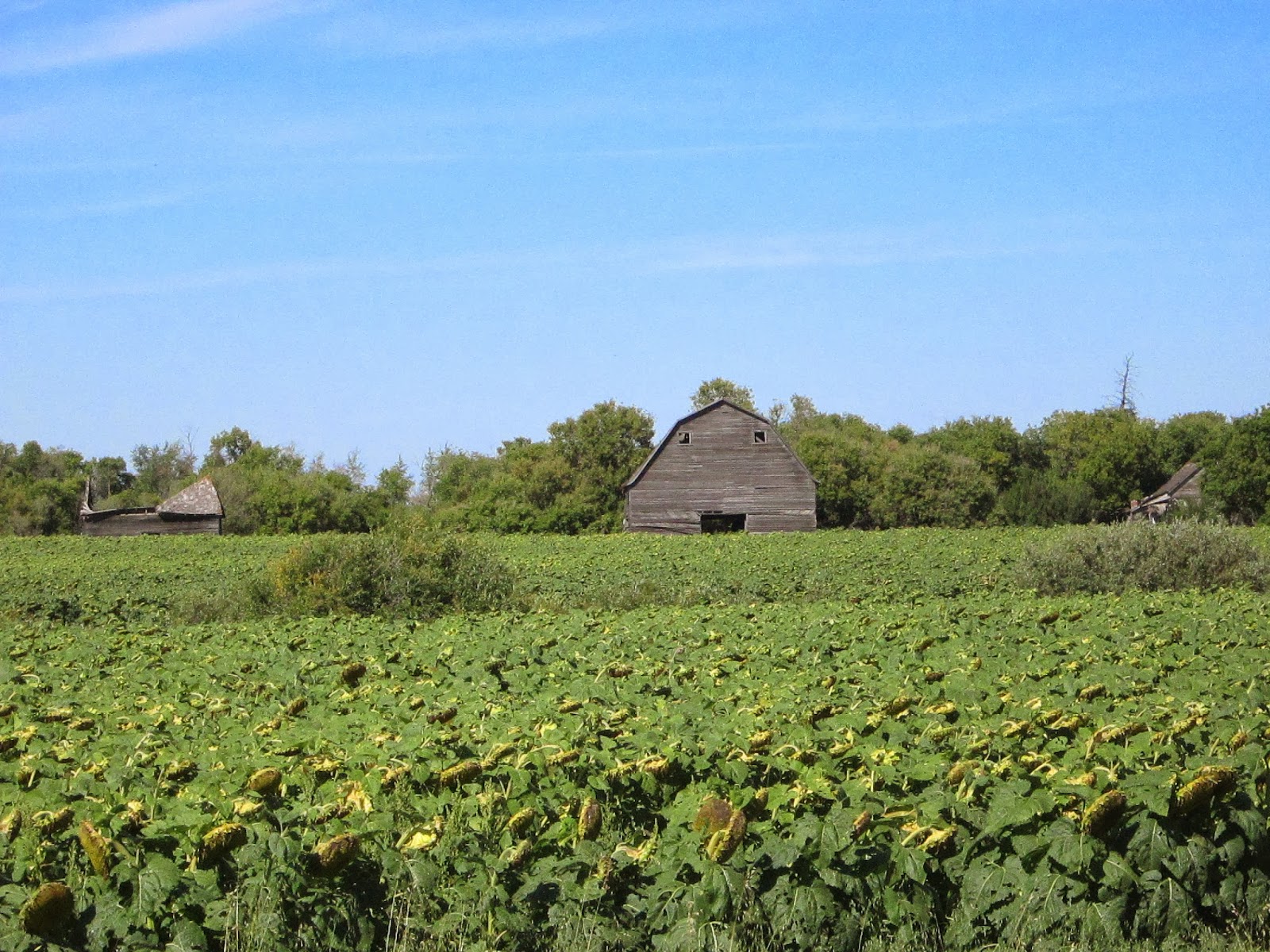 Reminding myself of the weekend fire that destroyed the St. Jacob’s Farmers’ Market.  Bad business.  Caught the hourly news before the station drifted out; the death of the young Native boy still dominating. Popped in a CD; a little Bach is a fine thing on a sunny afternoon.


You can see things from the highway but how to get at them?  Once you figure out how to get onto the service roads, you’re all set. 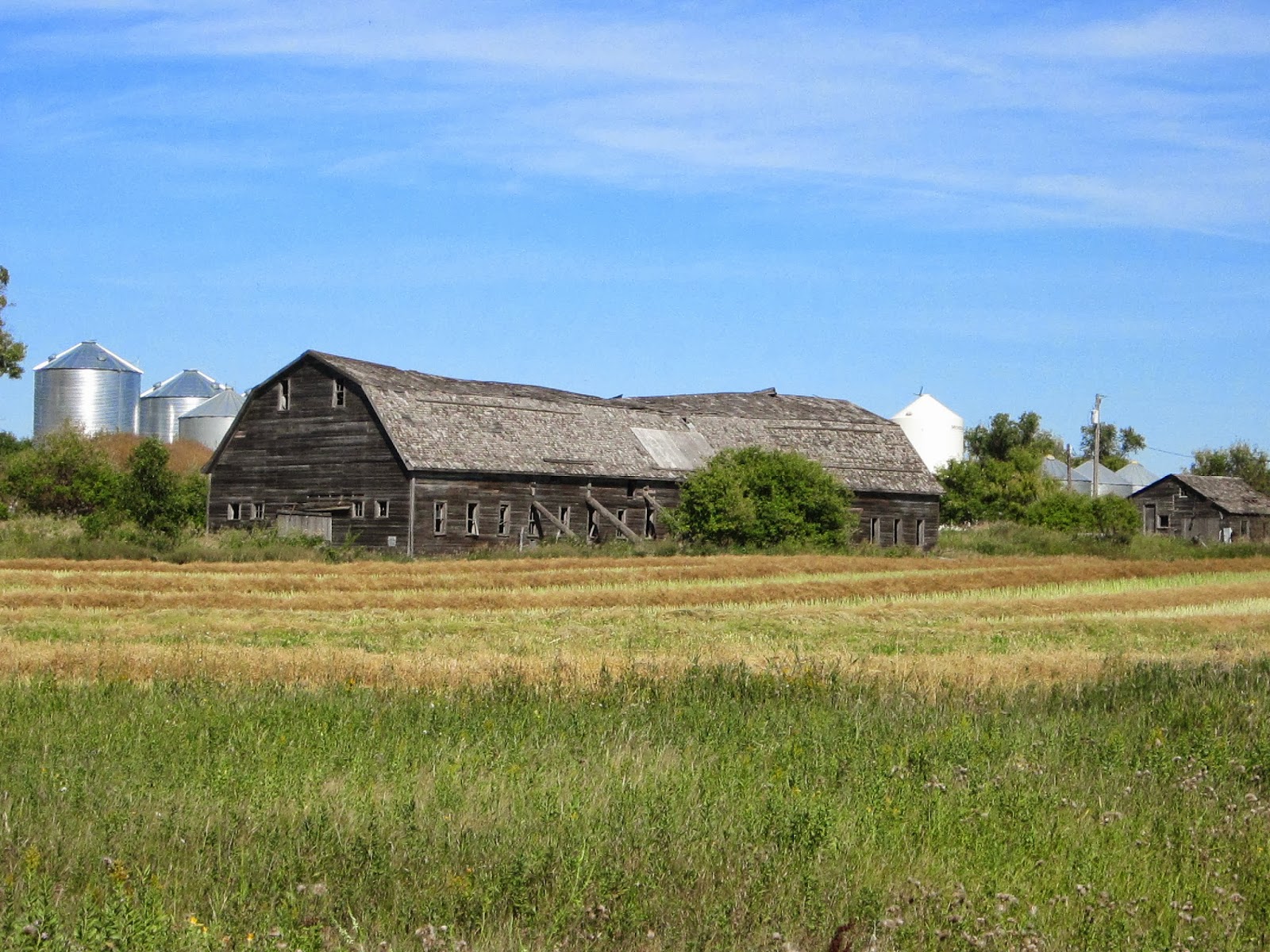 I was warned by more than one person that the Prairie would be tough going.  “There’s nothing on the Prairie.”  “Make sure you have lots of CD’s in the car!” And, the old joke about the dog running away from home; its owner (three weeks later) sits on the back porch still able to see the dog running away. I would say if you’re not enjoying the Prairie, you haven’t opened your eyes and ears.  Spied this church from a distance. 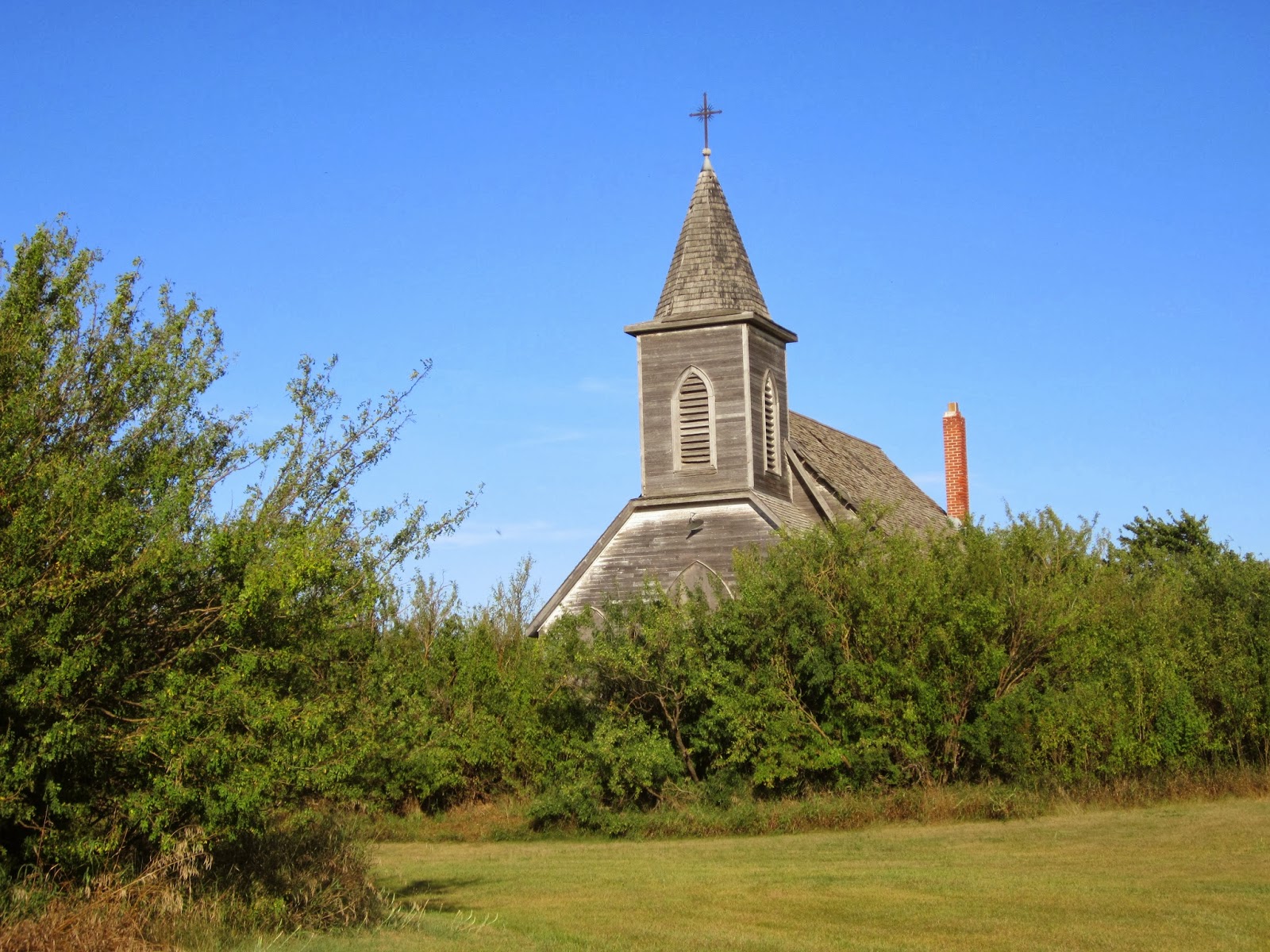 A long train was close by and I had to get over the tracks quickly or else set up camp for the night while the train passed. On the other side of the tracks, there was a community of six houses and a farm and I couldn’t find the church anywhere.  Another Twilight Zone moment?  You can only drive around so many times by after which you convince yourself you never saw a church.   Like most structures of this kind, they are situated in the middle of a field in the middle of nowhere.


A common vignette-abandoned cars, rotting grains and a trailer or two. 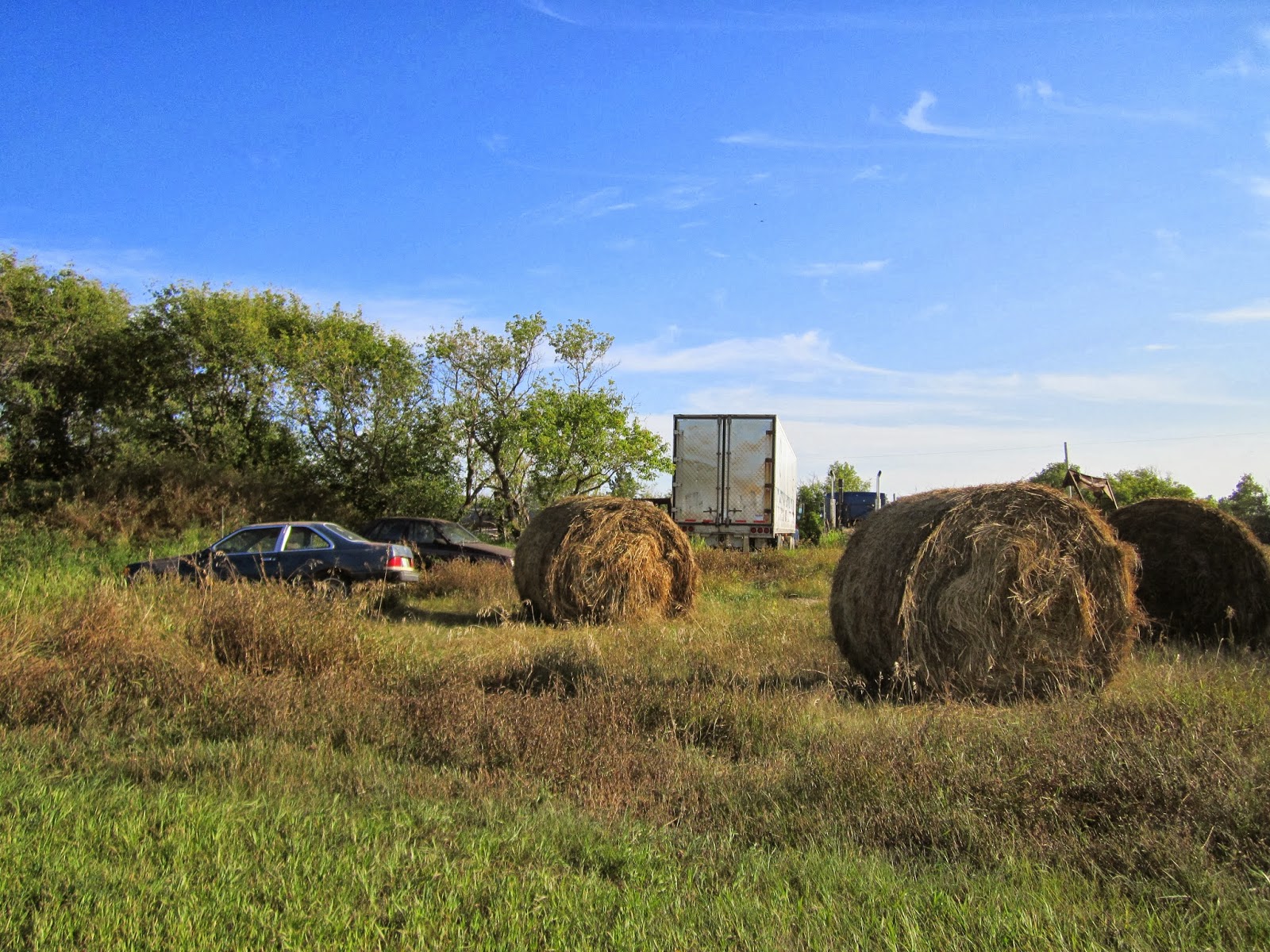 Grain elevators, in various states of repair, dot the landscape. 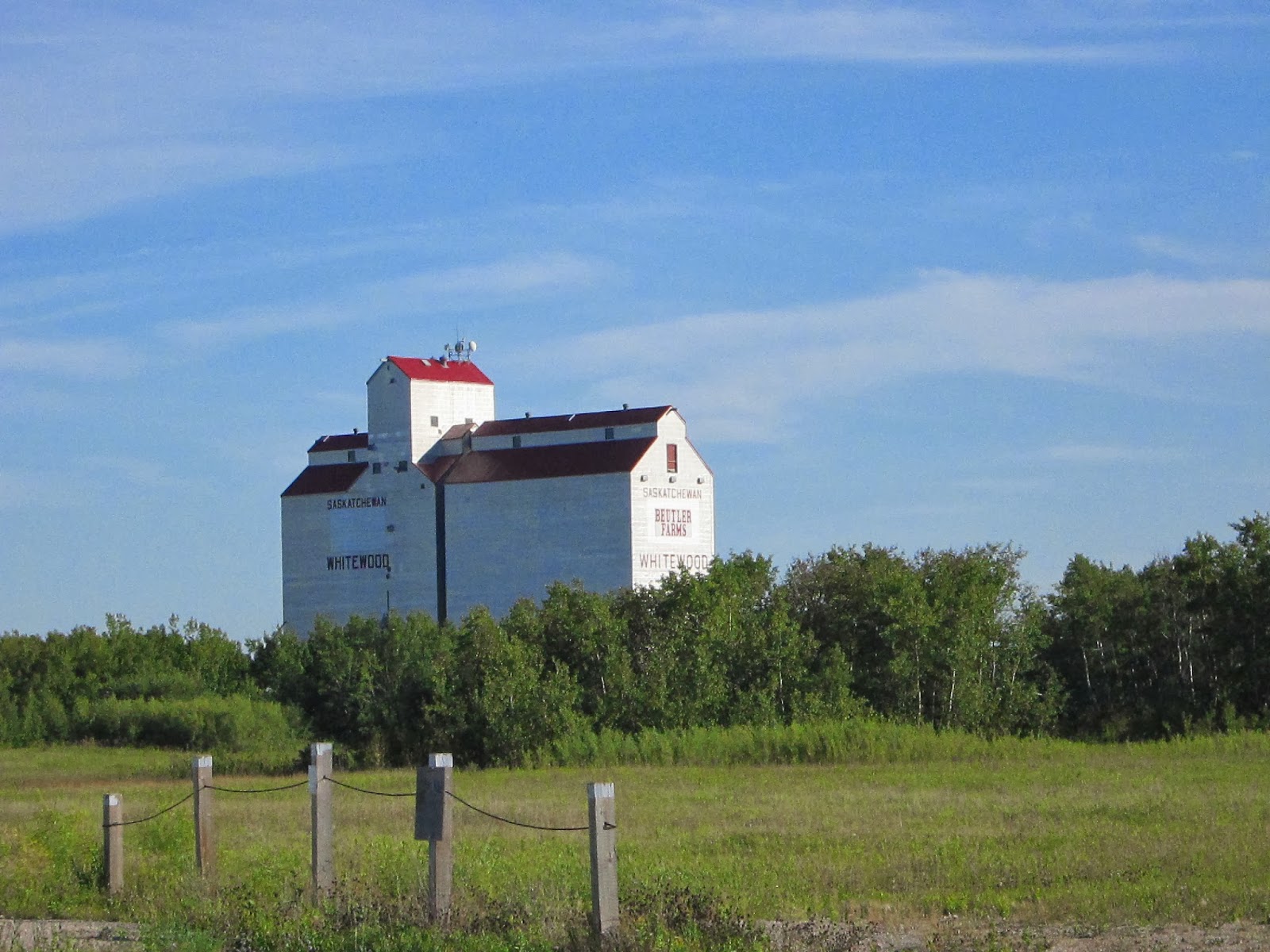 Whitewood, SASK is a good pit stop point; a one man gas, grocery & lotto.  Hopefully he had help running the adjacent diner.  The Greyhound stops here and the store would be a great place to spend time People Watching.  I cracked open the cooler; things still looked edible.


One thing to note is the civilized driving.  No aggressive drivers, no weaving, no bizarre lane changes.  Everyone just doing the speed limit and getting along just fine.


Tonight’s accommodations brought to you by Comfort Inn which comes with a view of the Wal-Mart shopping plaza.  Wised up and picked a spot right off the highway. But, how to get in to the place?  For once, I got in before midnight and had time for R&R.  The place was undergoing renovations but instead of completing one project and moving on, there were all kinds of work orders outstanding.  Mirrors in the bathroom, landscaping, new breakfast room furniture still in the boxes that were piled high in the lobby. And despite being 7:30 PM, there were three housekeeping carts lined up just outside the lobby.


Tonight I ate like a King-microwaved tinned soup. I had no energy to drag myself out into the town never mind the Chinese across the parking lot.  Hence, the nod to Elizabeth David.  In part, she would have approved of the simplicity of the meal.  Big Night is a wonderful film about two brothers trying to make a go of it in the restaurant business.  The eldest brother is a purist and wants to give the public an authentic Italian experience. They create a feast of ten (?) courses but it is the final scene of a simple omelette being prepared and eaten that I really enjoyed.


Trawled through a little TV-The Food Network, Seinfeld, Simpsons (wondered for a nano-second about the kids preparing for the first day back) and Charlie Rose that I haven’t seen for years.  For some reason it was always on at two in the afternoon in Ontario.  No TVO, but then we’re not in Ontario anymore-had to remind myself.


Until next time when Regina defends itself.