No light at 5AM.  They don’t mention that in the guide book.  But, we were on the cusp on September and I was greeted by only a sliver of moonlight.  Finished loading the car and backed quietly onto the road.  It took ‘til Oakville to confirm that the overnight bag was still in the house and with it, toothbrush and deodorant.  UGH.


Fearing the construction crews would still be in full swing, drove into Burlington with some trepidation.  They were gone.  It was a treat to be on the 401 with like-minded travellers.  No lunatics weaving in and out of lanes; no one driving within a quarter inch of the bumper.  Pearson Airport traffic is generally at a stand-still; not at 6AM.  I had actually convinced myself I was still on the QEW in some Twilight Zone moment.


This was to be the first trip outside of Ontario since ’98; time to explore a little of the country.  Can you see the country in fourteen days? I opted for a little culture soaking tour of Ontario, Manitoba, Saskatchewan and Alberta. This would be more of a reconnaissance mission-a who, what, where of each province.  Other questions: how reliable is a CAA guide book?  How reliable is Canadian Living's foodie recommendations?   I made a list of food destinations based on these two publications.  Someone asked if I was over-planning as I’d laid out daily options for activities and meals for each of my stops.  I think a modicum of planning is good but it doesn’t mean you’re committed to anything.  Based on previous experience, I did not want a repeat of spending an hour or two deciding where to eat.


Afternoon Tea was essential as was pastry shops, French cuisine and pancakes done in the Finnish style. I also wanted to prove the anti-Prairie people wrong.  More on this later.  It was also essential to have ice cream on this trip.  Last year found me in Hastings County in close proximity to Kawartha Dairy ice cream but it was so cold and rainy I couldn’t bring myself to buy a cone.


CBC for the early morning drive.  Left the Burlington Rib Fest far behind but heard tell of another in Sudbury so scheduled a detour.  A large black cloud hovered over Vaughan and then the rains came.  As you know, it is likely to be raining if I’m behind the wheel.  Somewhere to the left and right of me was farm country. Went through Barrie years ago and my only recollection of the area is a comic book store that had a fine collection of Cracked-spoof of M*A*S*H and the like.  Don’t know what became of the magazines. Thirty Thousand Islands and lots of early AM fishermen out on the banks.


The morning show continued with a BBQ and wine pairing guru and the news that TVO’s Saturday Night At The Movies would be airing its last film that night.  What are the good people of TVO thinking?  More to the point, what are The Bean Counters thinking?  CBC interviewed SNAM ex-pats who seemed like they’d been briefed by TVO’s legal counsel to say nothing controversial; reasons for SNAM’s demise was not mentioned.  So after losing Film International all those years ago, SNAM was preparing for the chopping block.  People get very gooey about movies and love a Top Ten List; try SNAM MOVIES  .  What are your favourites?  Elizabeth Hay’s Garbo’s Laugh includes a family of movie-philes who watch their favourite films over and over relishing every scene.  Really enjoyed this book and it’s my first recommendation. You cannot escape graffiti and even up here evidence of unrequited love and I Was Here abounds to say nothing of tagging.


Parry Sound in three hours. (Watch for the Orillia cut off because it will come up fast and you’re likely to miss it.) Cool and humidity coming in waves. Was in desperate need of caffeine and made a pit stop for a toothbrush and milk at the local Walmart.  Practically all my overnight accommodations had a splendid view of a Walmart parking lot.  For an effective caffeine boost, try the Tazo Chai.  Just add milk. 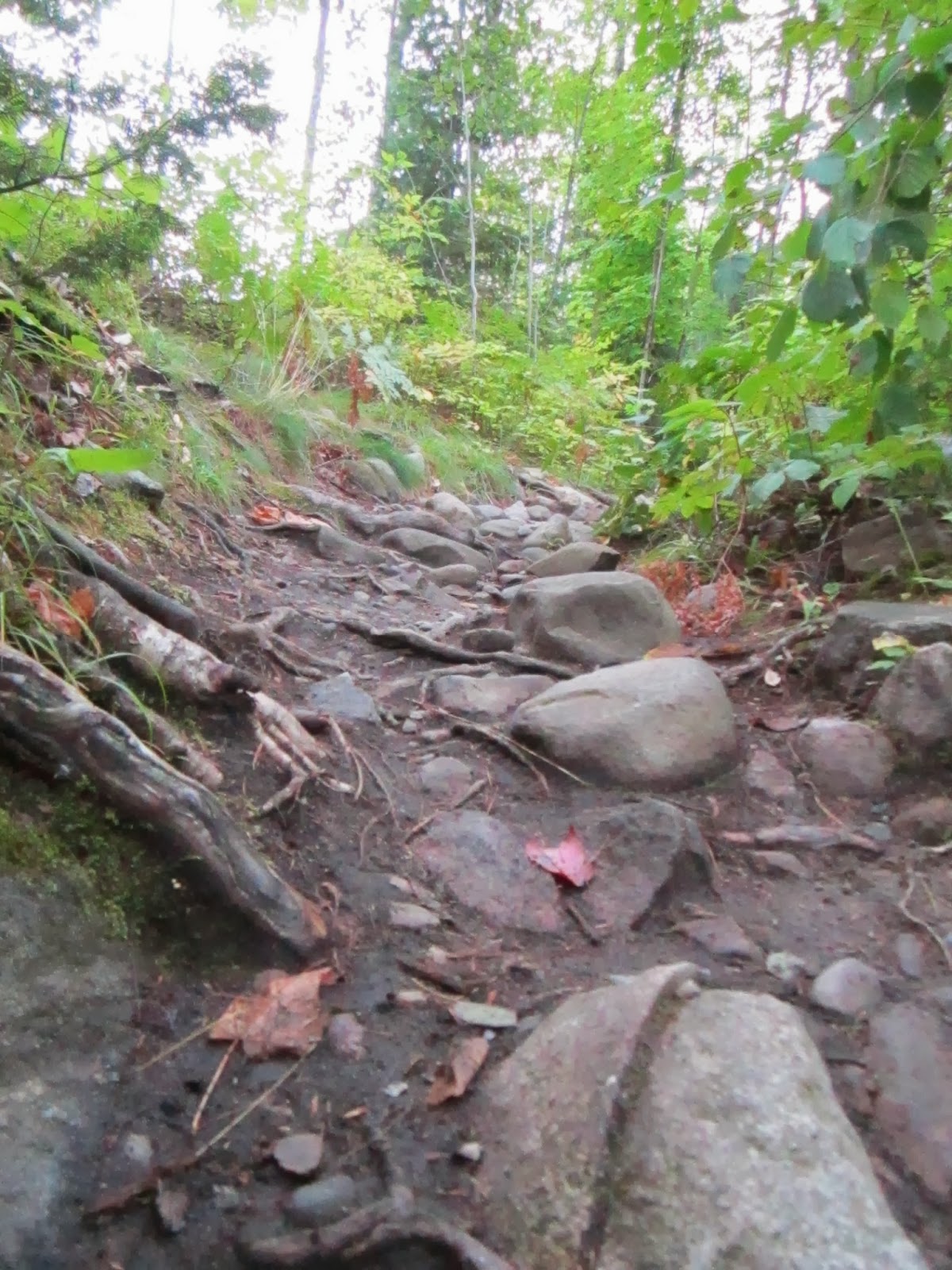 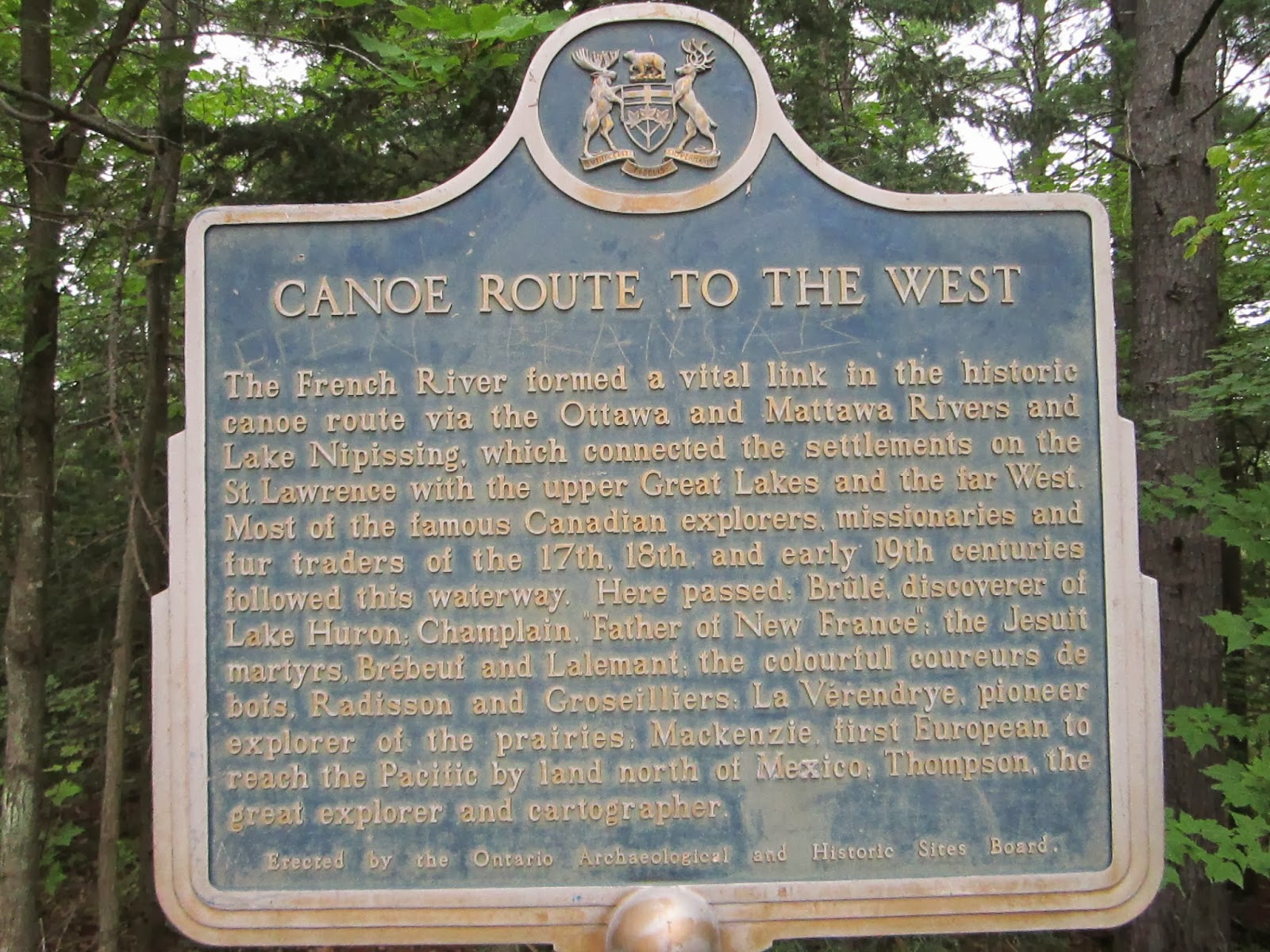 Next stretch stop was the French River.  You cannot ask for better WC facilities. So clean.  Not realizing there was a choice, most people were heading to the rustic latrines on the left-hand side.  Head a little further in land and there’s a museum, gift shop and someone to help you with all your Parks Canada needs.  There is a short but rugged trail of about 2.5km which is apparently full of Massassauga Rattlers-venomous, so reads the sign.  Time was getting on so I put the hike on the back burner.  The truck traffic is a little heavier here but manageable. 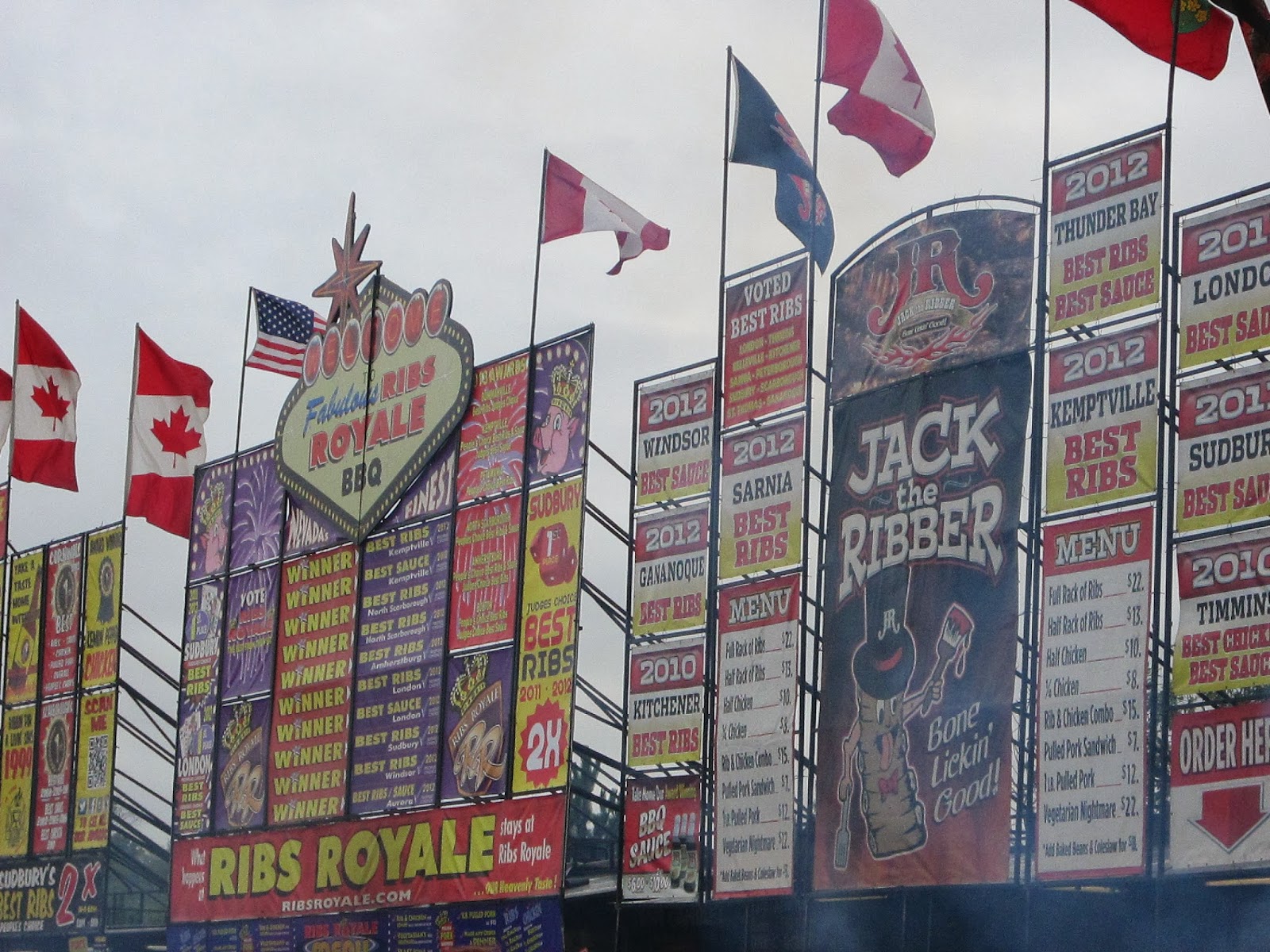 In Sudbury it’s important to stop and ask directions early on because there was no signage for the Rib Fest anywhere and you may find yourself heading West out of the city through what appears to be the Business District.  Not so.  Then you may find yourself finally crossing the Bridge of Nations but failing to make that critical left hand turn onto Elgin.  Even then, the signage was non-existent.  Eventually secured a parking space and made a B-line for the ribs.  As mentioned , Burlington’s Rib Fest was on this same weekend and it bills itself as the largest in North America.  Who would we find in Sudbury?  There were five all-Ontario contenders for top prize and I went with Jack The Ribber.  I’m not a connoisseur of ribs but I felt these were a touch on the dry side.  I wandered off to the vendor tables and found Perogy Princess-bottler of beets and cucumbers and maker of perogies. The Farmers’ Market was doing well and there was the usual classic car and motorcycle show.  Back to 17 West.


Construction ongoing to widen #17.  Lots of on ramps and overpasses but overpasses from where?  It’s bush on either side.  I would have thought this kind of environment would be protected from dynamite.  Apparently not.  Not sure we need four lanes. 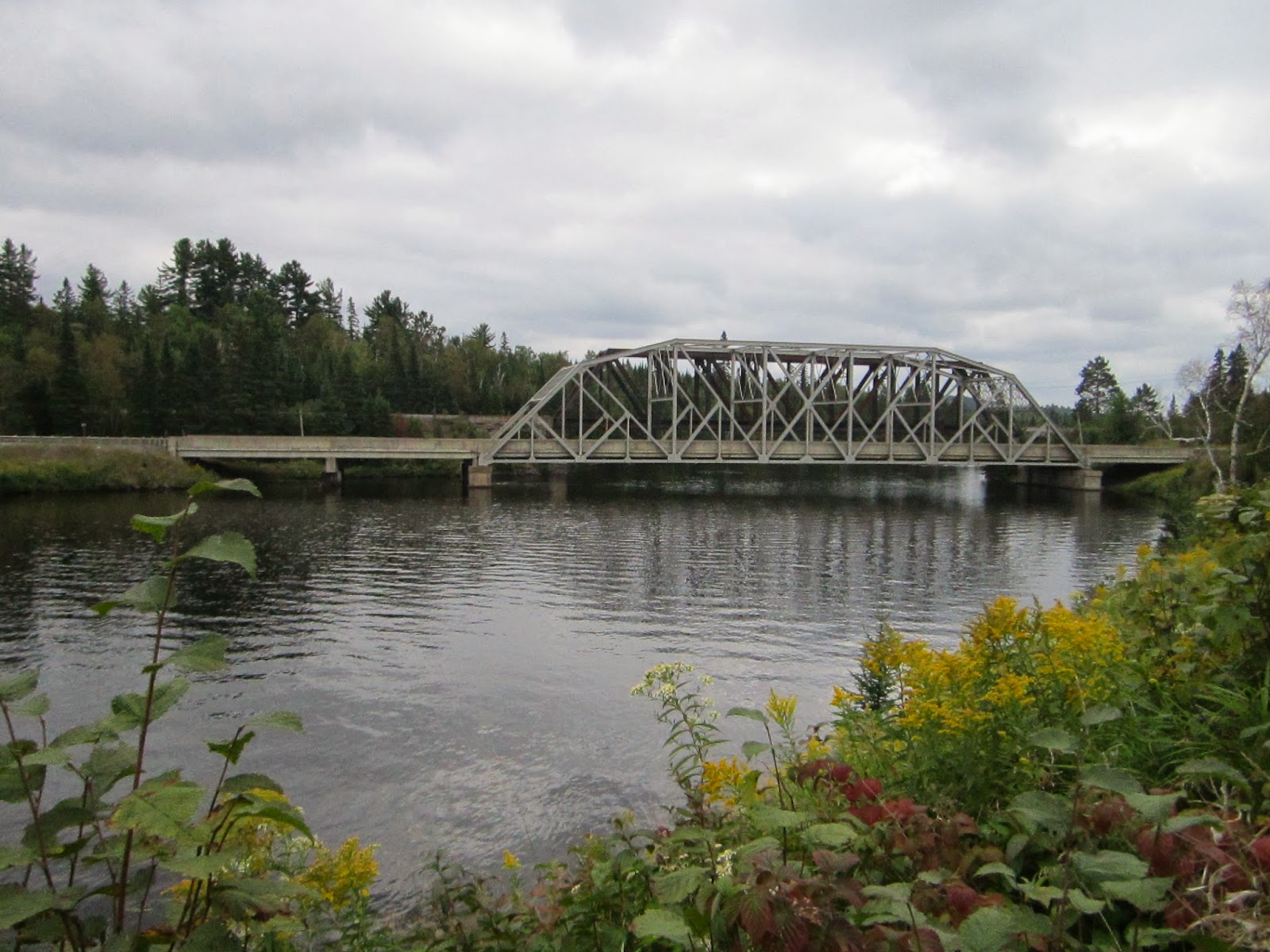 Unlike the French, the Spanish River rest stop left a great deal to be desired.  If you’re desperate and absolutely must stop, just before McKerrow is a little Provincial picnic area.  There are two washrooms but the water is no longer running and the light bulbs are burnt out.  Keep the door open a crack and you might be able to get to the toilet without walking into a wall.  I’ll leave it with you to determine how critical your need is.  Keep lots of hand sanitizer in the car at all times.  A little bit down the road are an Esso and Tim Hortons.  Hortons is busy so you might enjoy the solitude of the picnic area.  Bring a flashlight. 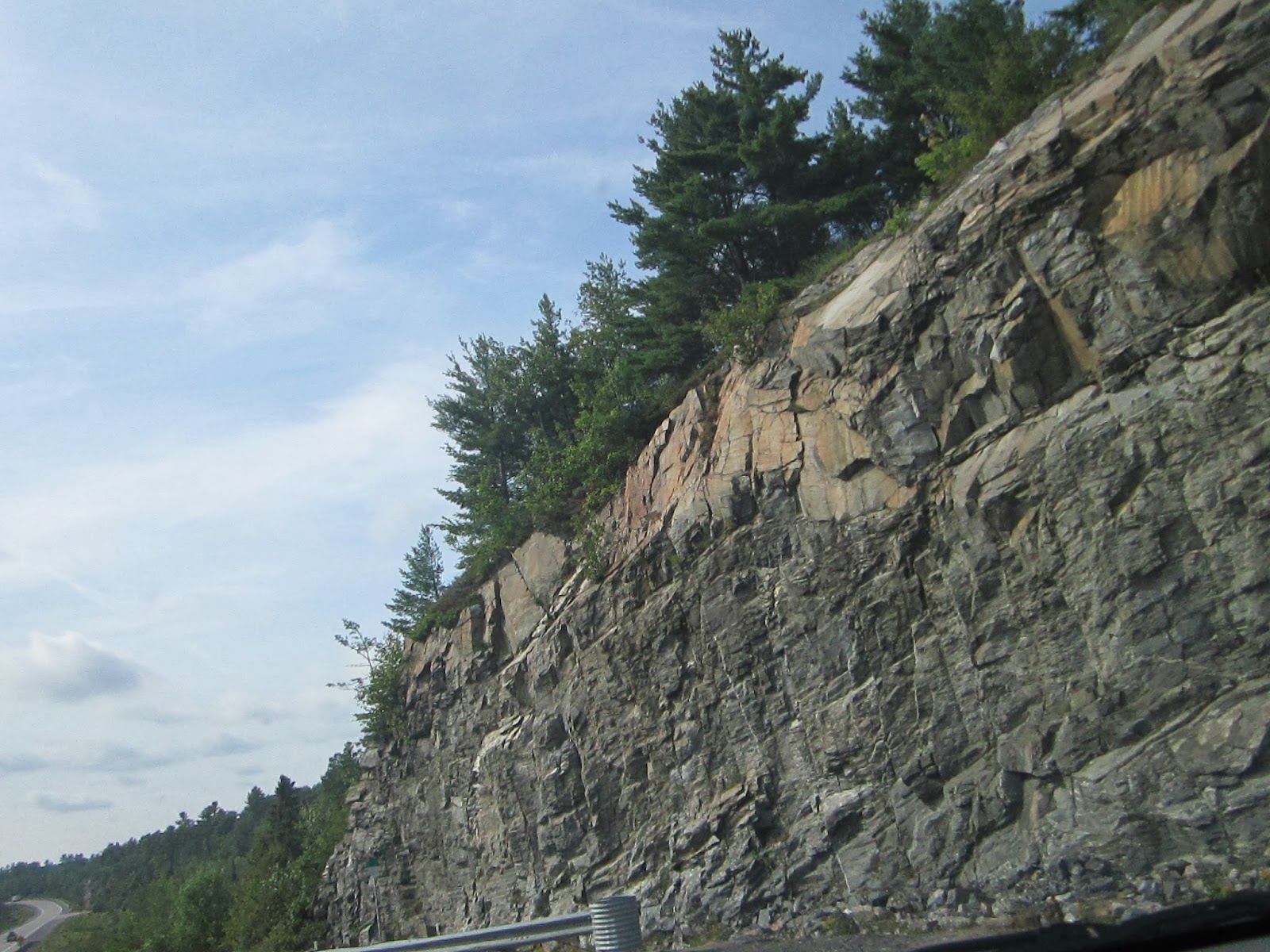 Took a half hour detour up to Elliot Lake.  Stopped at the Mining memorial and talked to a retiree from Ajax who was out getting some sun while reading his book.  There are 30km of trails in and around the lake and plenty of smaller lakes for boating and fishing.  There is very little in the town and I have to confess it didn’t dawn on me until much later that this was the Elliot Lake where the mall collapsed.  I saw the former sight on my travels around town but didn’t put two and two together.  There is large parcel of concrete left and the sign is still up.  Don’t know where locals are shopping as North of the town is a provincial park and south is Serpent River. This is the mining memorial on the lakefront… 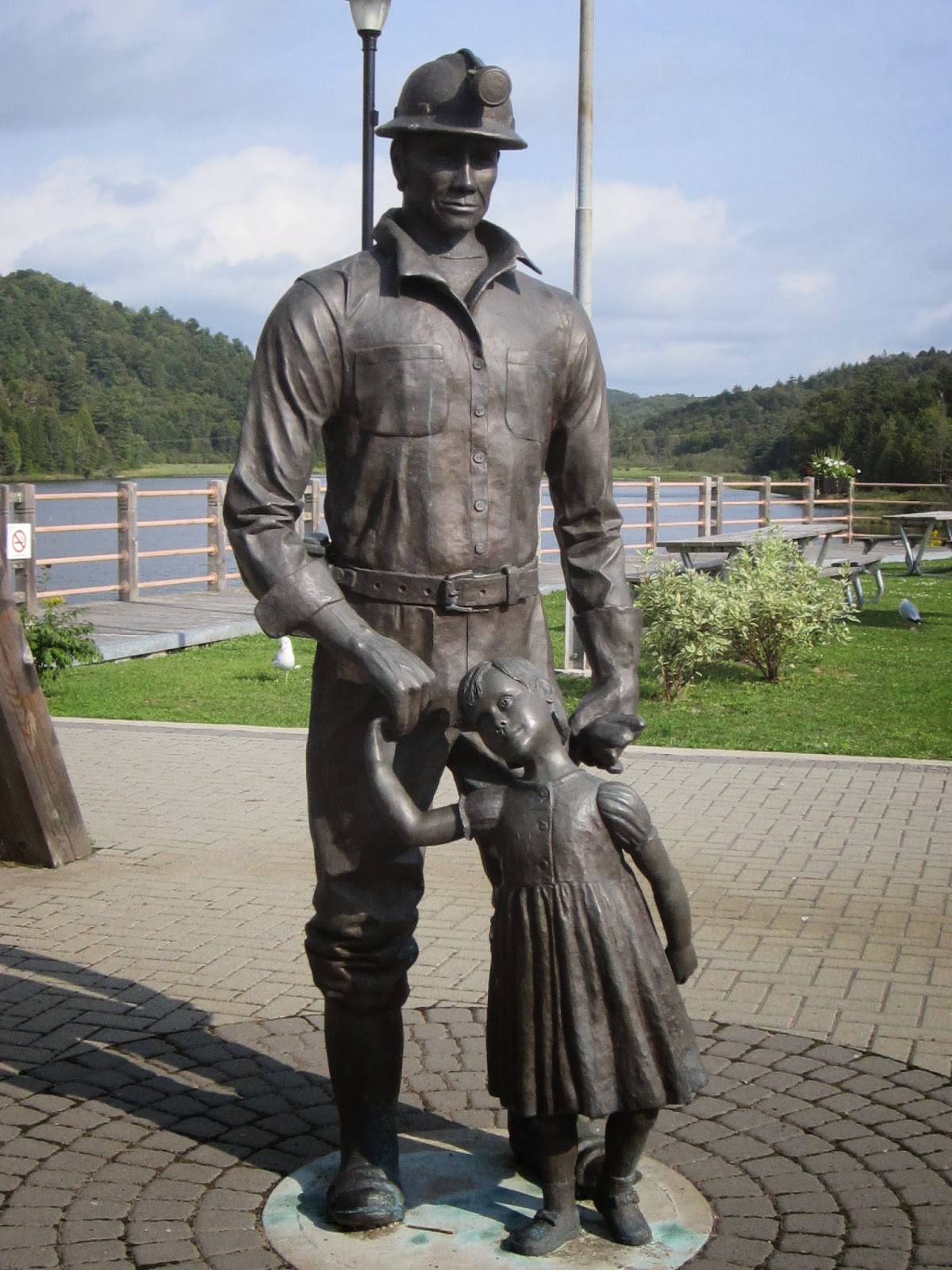 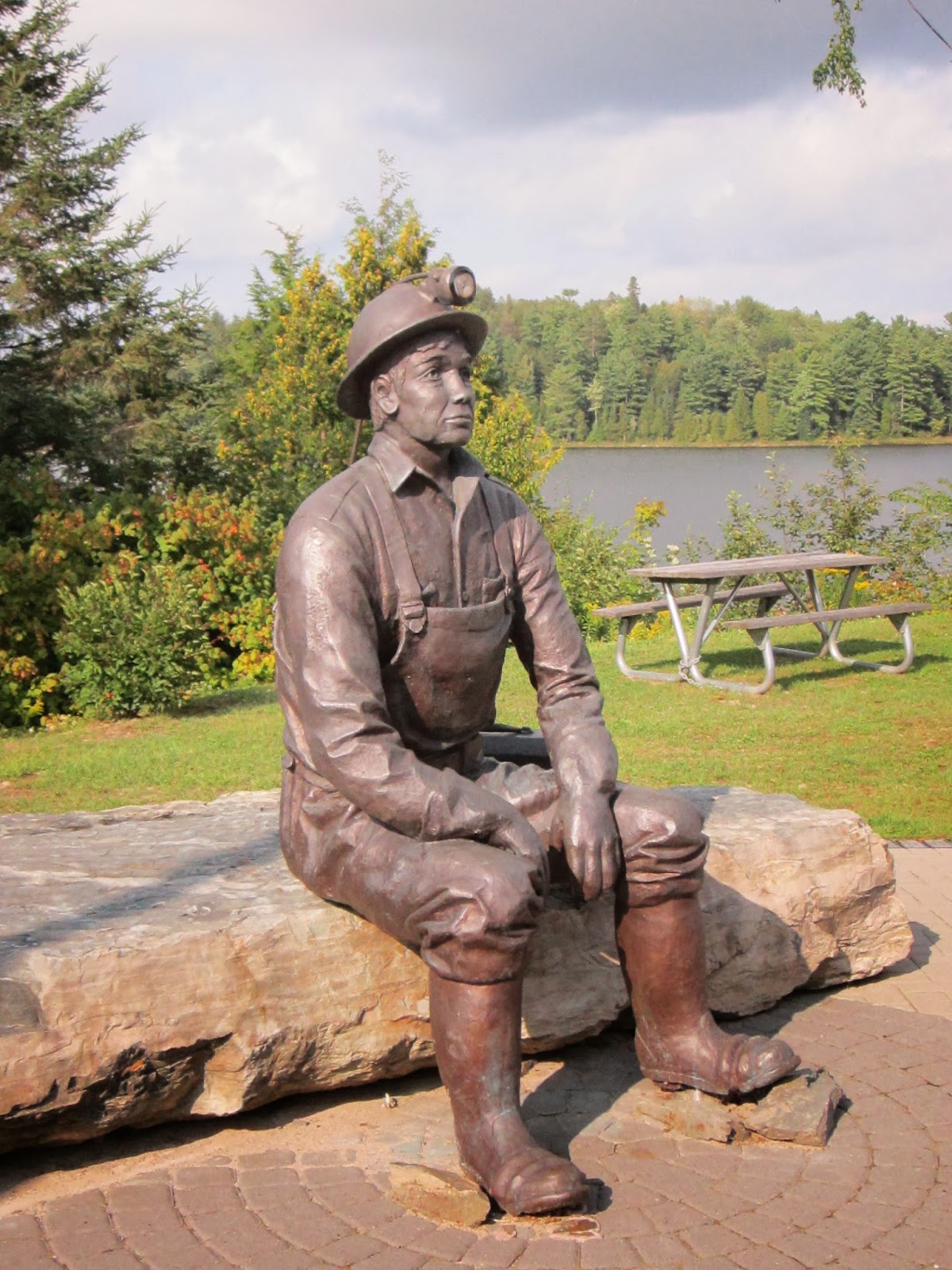 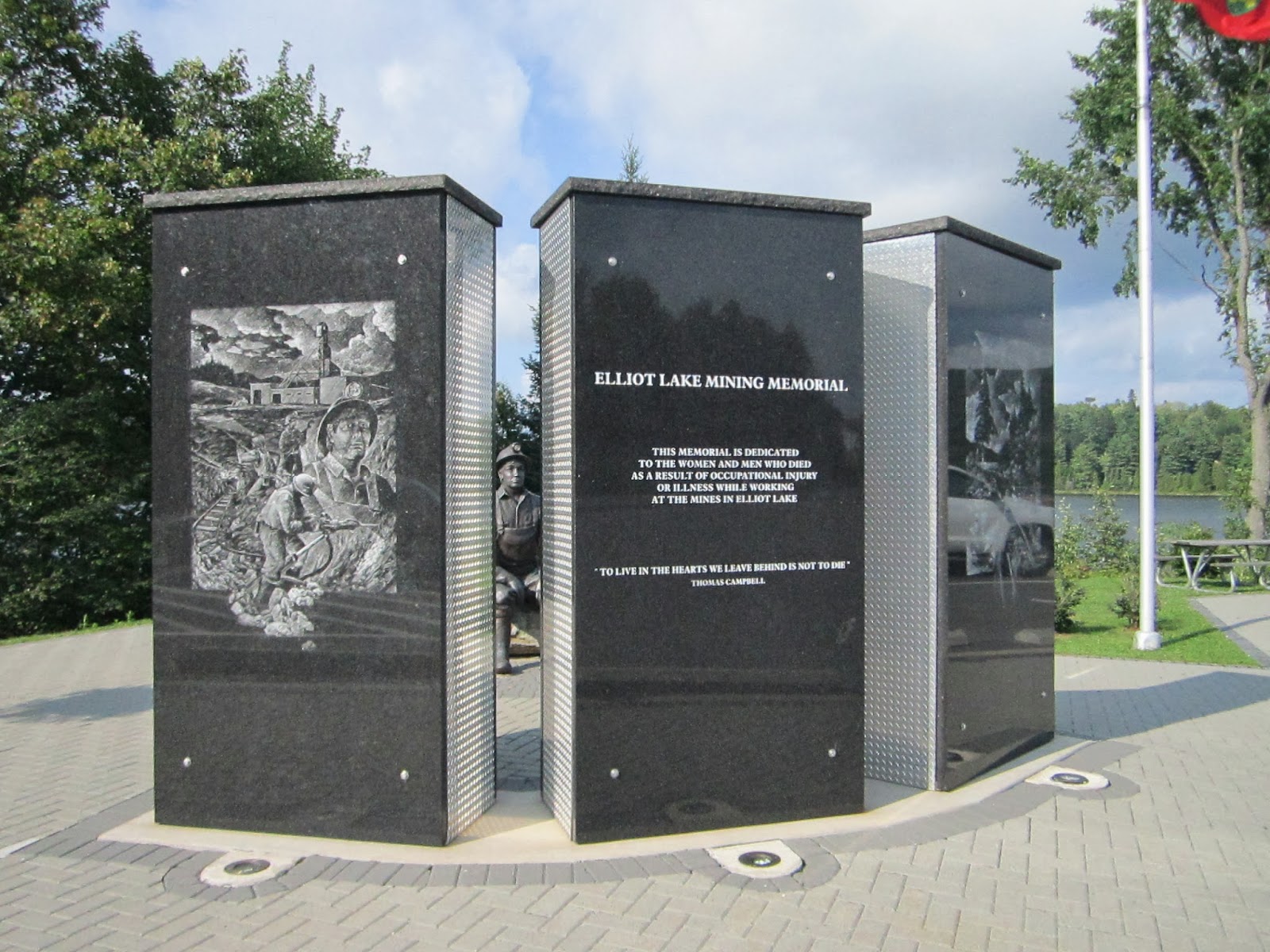 Very scenic would be an understatement.  Some nice spots along The North Channel.  The farms return within 100km of Sault St. Marie.  Cows and sheep; lots of nice barns. 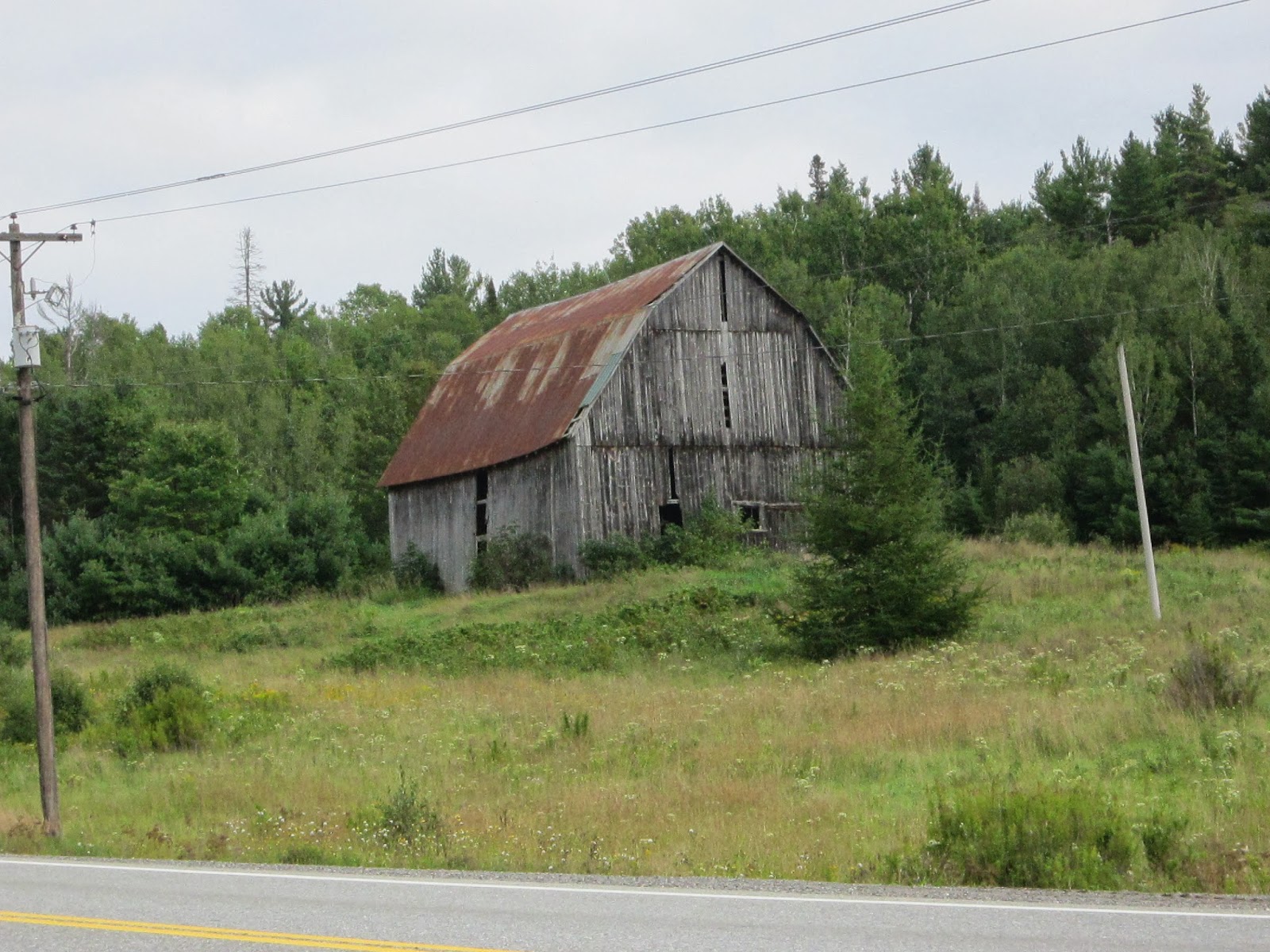 Arrived in the Soo and promptly scrubbed the last of the Spanish River off of me.  Young woman on the front desk who offered a less than enthusiastic check-in.  The front desk was the last place she wanted to be.
Settled in for SNAM’s The Lives of Others.  Imagine if you will, life in East Germany under Stasi paranoia.  Excellent film; put it on your To Do list.  If you’re influenced by awards, I’m told it took an Oscar.  Fussed about with the alarm and settled down.  Couple of lunatics running about the halls and I was tempted to throw the door wide open, half dressed, to see what they made of that.  I was not in the mood for an arrest, however.  “Mommy, there’s a strange lady down the hall.”  I can hear it now.  But, people, do get a grip on your children.  Especially if it’s that time of day when they should be in bed.
I’m having a T-shirt printed, I Curmudgeon.  If you can find it, recommend Alan Zweig’s documentary of same name.


Until next time (when we will actually get stopped by the police).