A Gazebo is not, after all, a meat larder.  (Thomasina in Arcadia)

The Bat Mobile went by in a blur; was that Joker behind the wheel?  Wasn’t sure if my eyes were tricking me; the cocktails and wine may still be speaking to me. It doesn’t do to overindulge when you’ve a full day of People Watching ahead of you.  So not quite up with the Sunday morning birds, but managed some form of breakfast before setting off to Niagara On The Lake.  Unfortunate scheduling on my part choosing an 11:30 show, but have since learned my lesson.


After a week of cubicle mode(where I tried to maintain holiday mode for another five days) I was more than ready to strike out again.  Many people had the same idea because the highway was unusually busy and the sighting of some clown behind the wheel of Bat Man’s car was a refreshing sight.  Better than watching the driver to my right fling his chewing gum out the window?  Your gum has gone has gone stale, do you A) wrap it in a tissue and place it inside your garbage compartment or B) fling it out the window and hope it doesn’t hit a passing motorcyclist?


Niagara Stone Road can be a breaking point for drivers and it’s got to be frustrating for the locals should they get stuck behind a tourist doing 40 kmph.  It’s confusing for visitors as the speed limit changes from 80 to 50 to 70 back to 80 then 50 again.  Then again, they are too busy sightseeing to pay any attention to speed limits.


Secured the last parking space in town.  The church crowds are out in full force and parking is a premium up until 7PM ish.  What are tourists doing up at this time anyway? When I’m doing B & B it’s a leisurely breakfast followed by another leisurely few hours. 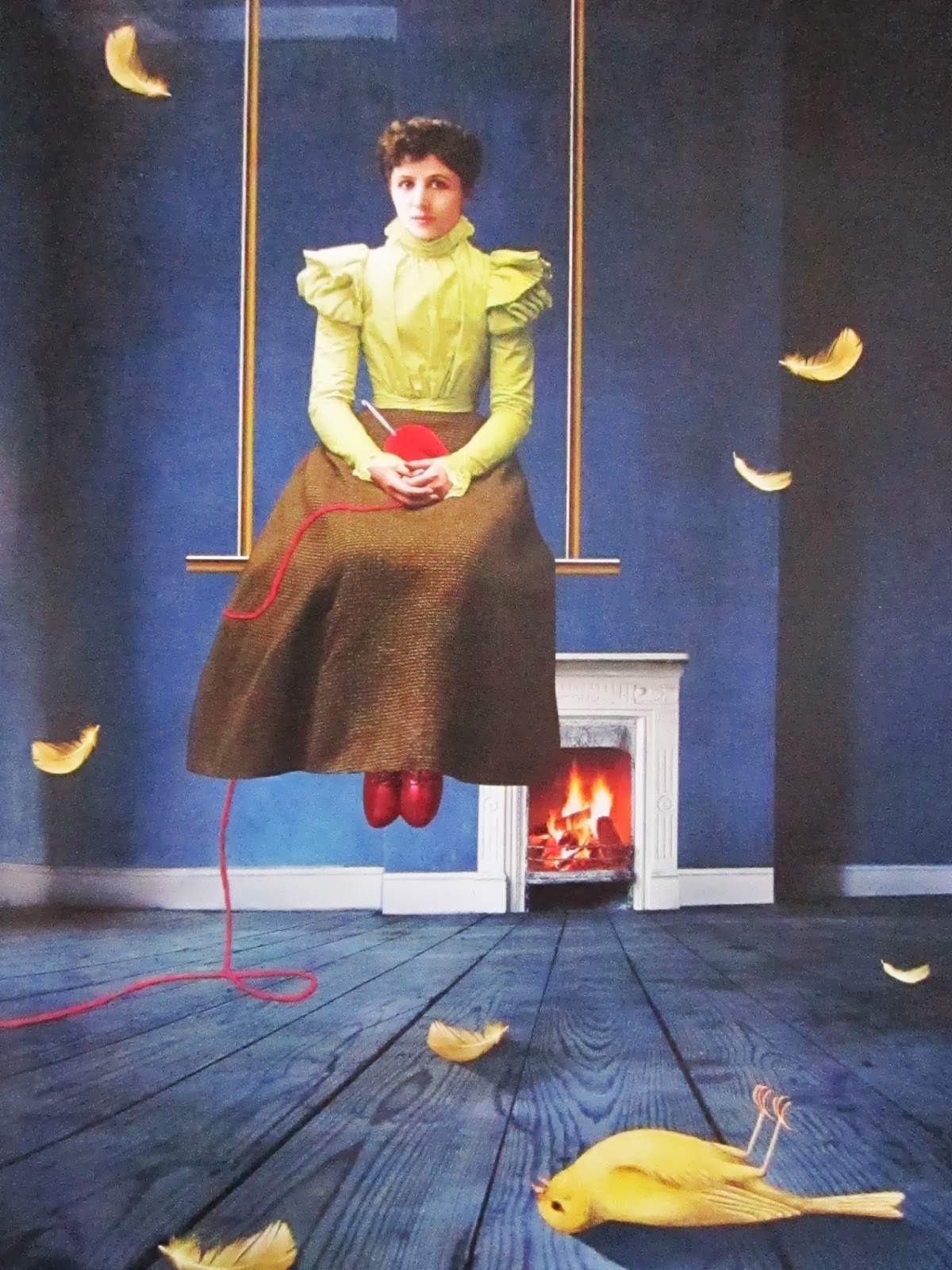 First stop was Trifles with two one act plays, Trifles by Susan Glaspell and A Wife For a Life by Eugene O’Neill .  Trifles reminded me of Swann, mentioned here before; things going on in farmhouses and no one on the outside knows because of the isolation.  Enjoyed this play very much.  The second play was regarded by the playwright as weak and while the acting is very good(how can you go wrong with Benedict Campbell?) the lines really don’t give the cast much to work with.  At the very least, it would be good idea to switch the play order.  You would come away more satisfied.  Spoke to a couple up from St. Louis-they were raving about Arcadia.


Seven and a half hours to kill.


Took lunch at The Prince of Wales, but, in the Churchill Lounge this time.  As mentioned, no smoked salmon on the menu in the Drawing room so it was time to seek out something different.  A wedding reception was in full swing in the banquet room and tables were jammed save for the chess table so made straight for it.  Enjoying the music when one of the guests approached the bar and asked for it to be turned off.  Well that got my back up (thought he was having a senior moment) until said guest sat down at his keyboard and opened  his American Songbook.  He was helped along with his drummer.  Very mellow lunch hour jazz.  Not sure it was appreciated by the staff, though.  It’s like Xmas carols in November; clerks struggling to maintain sanity.  That senior moment thing-something happens to seniors when the turn 80.  I've seen it time and time again. They regress and get and get very demanding.  True story.


Started with scallop ceviche which was served with carrot, black bean and avocado;  delicious.  Tricky to get avocado at just the right time; it can be rubbery or mushy or turning brown before your eyes.  Followed the scallops with the charcuterie platter-pate, terrine, house cured sausage and ham; came with house tomato sauce and pickled vegetable.  Warning, the sausage is hot and yes, the little green pickles have some heat.  The bread was soft, which makes a change from the usual stale, crispy slices most places serve up.   Sat across from the winner of the Patrick Stewart look-alike contest.  Good view of the street.


A couple came in for a quick pint.  They had wine tasting to get to and thought to get beer first to put something on their stomachs.  Historically, one would take a little food before a tasting, but, if a belly full of ale is more your thing then I’m not going to stop you.  The bartender was happy to have someone to talk to about local ales.


After ingesting for a couple of hours, it was time to move on.  After many years in NOTL, you no longer need to browse the shops so walked down King Street and had a look at some of the older properties.  This gentleman was getting some shade at Parliament Oak School. 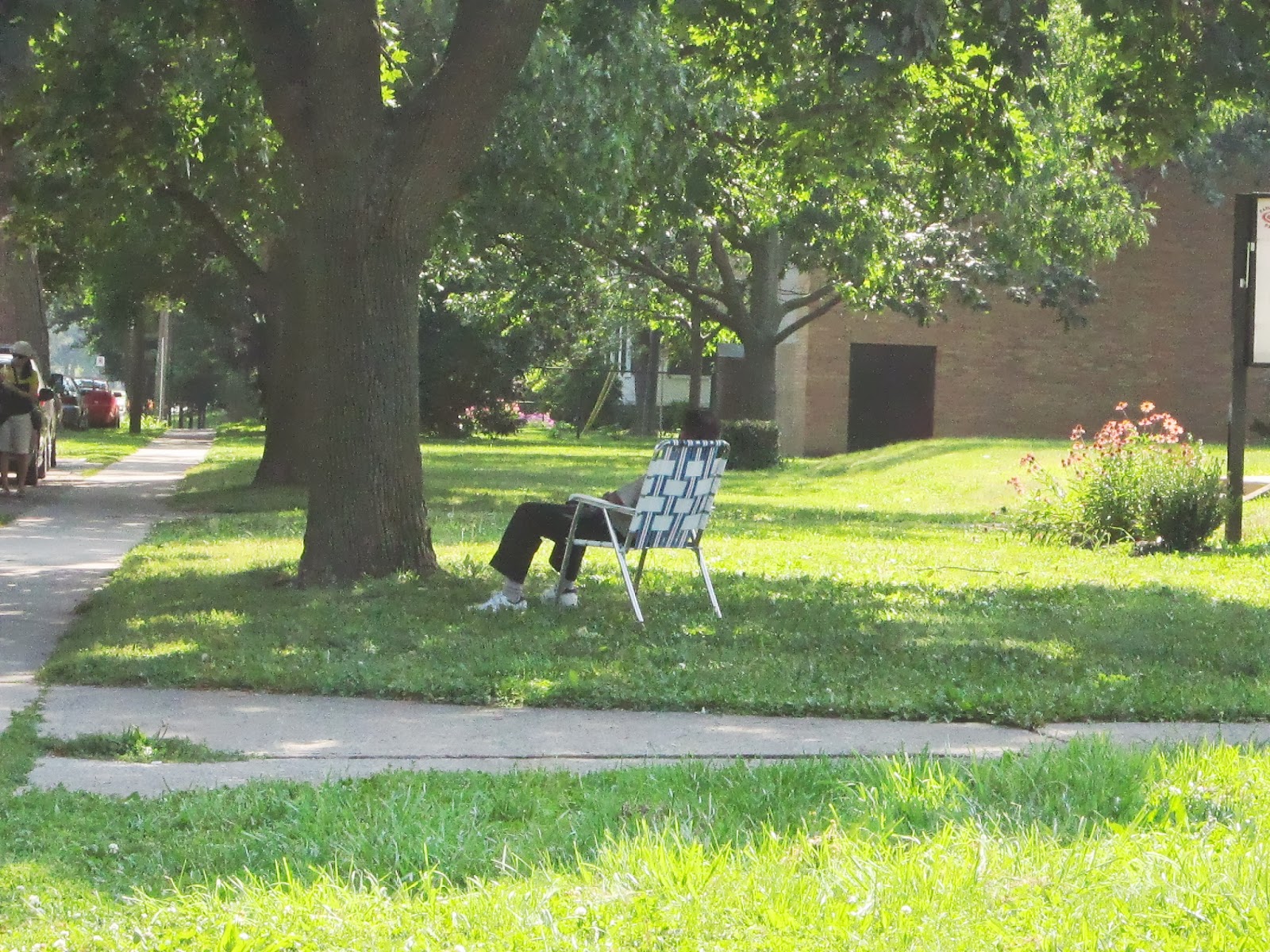 This old entrance is now a driveway to woodland. 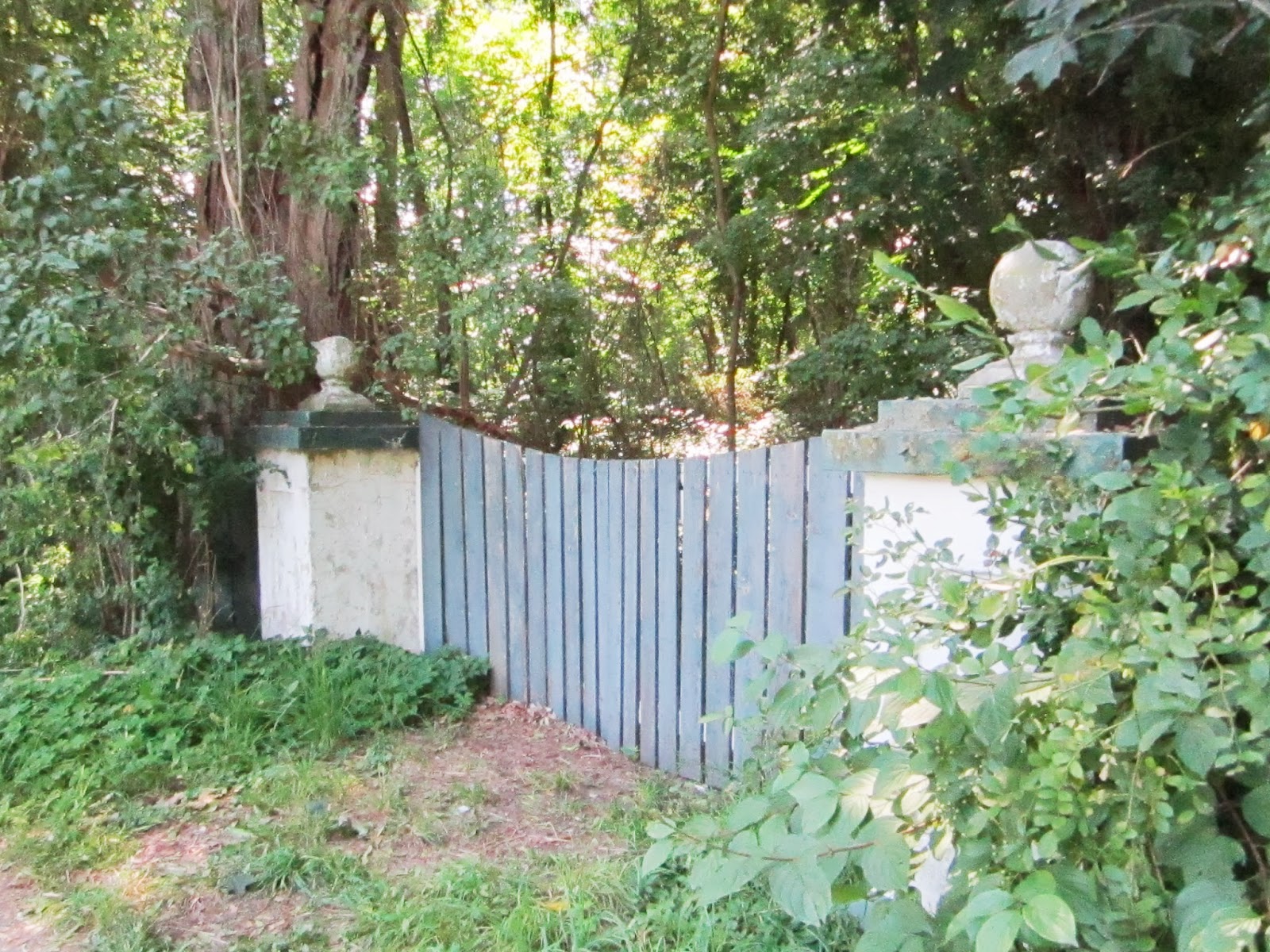 A quiet corner in a back garden. 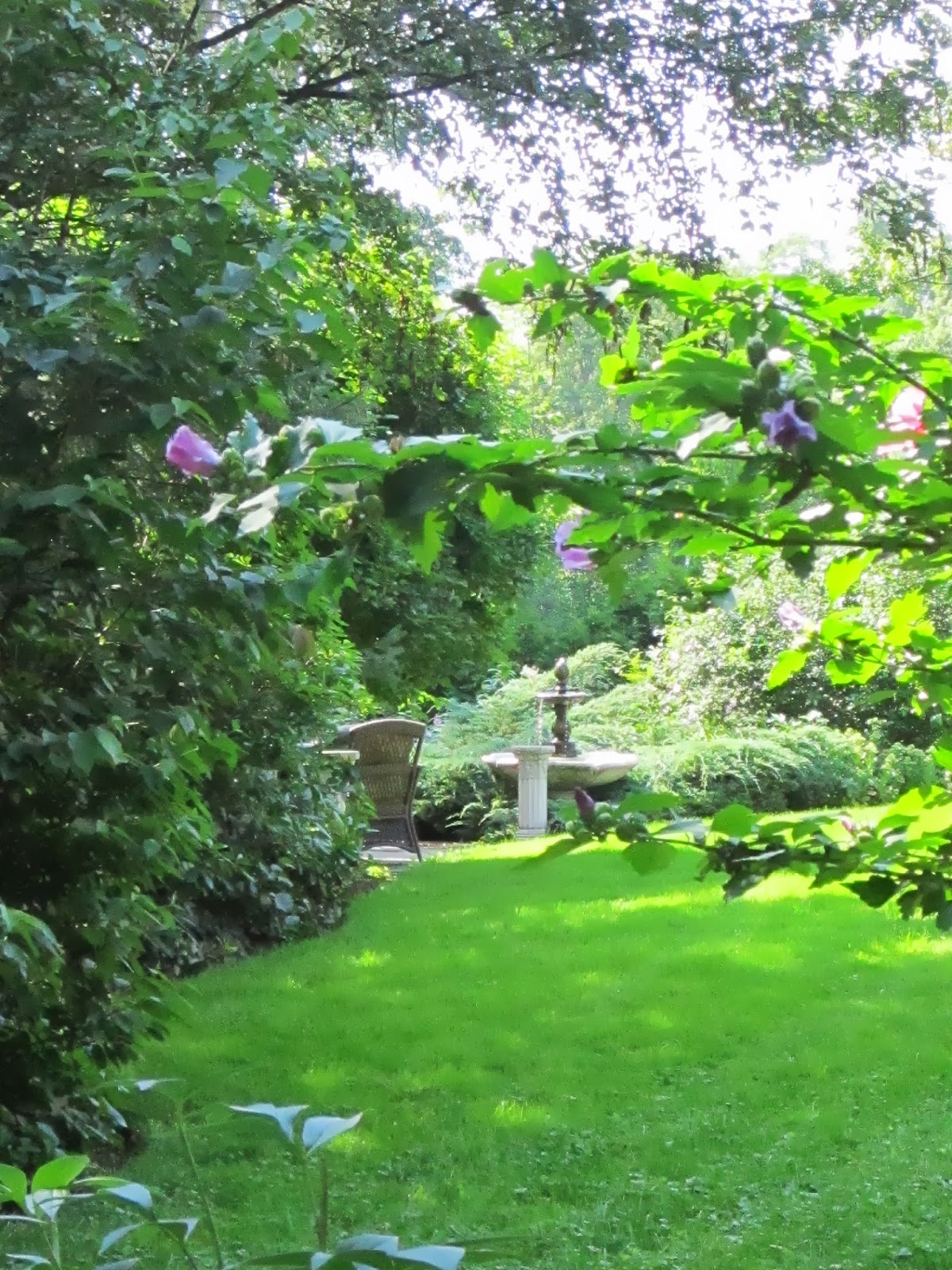 Walked through Butlers Barracks.  Someone has destroyed one of the historic plaques by taking a pen to all the soldiers’ heads.  One day the culprit will find out it’s their tax dollars that paid for plaques like this and they will be on a rant about vandalism having conveniently forgotten about their little jaunt through the park all those years ago.  No benches in sight so on to Victoria Park which was comfortably full.  Avoid this space on National holidays, though.  Made great strides with The Emperor of Paris by CS Richardson.  A nice read; very Spartan writing style.


The kids got a tad rambunctious and took refuge in the graveyard of St. Marks.  Quite a few visitors here today. 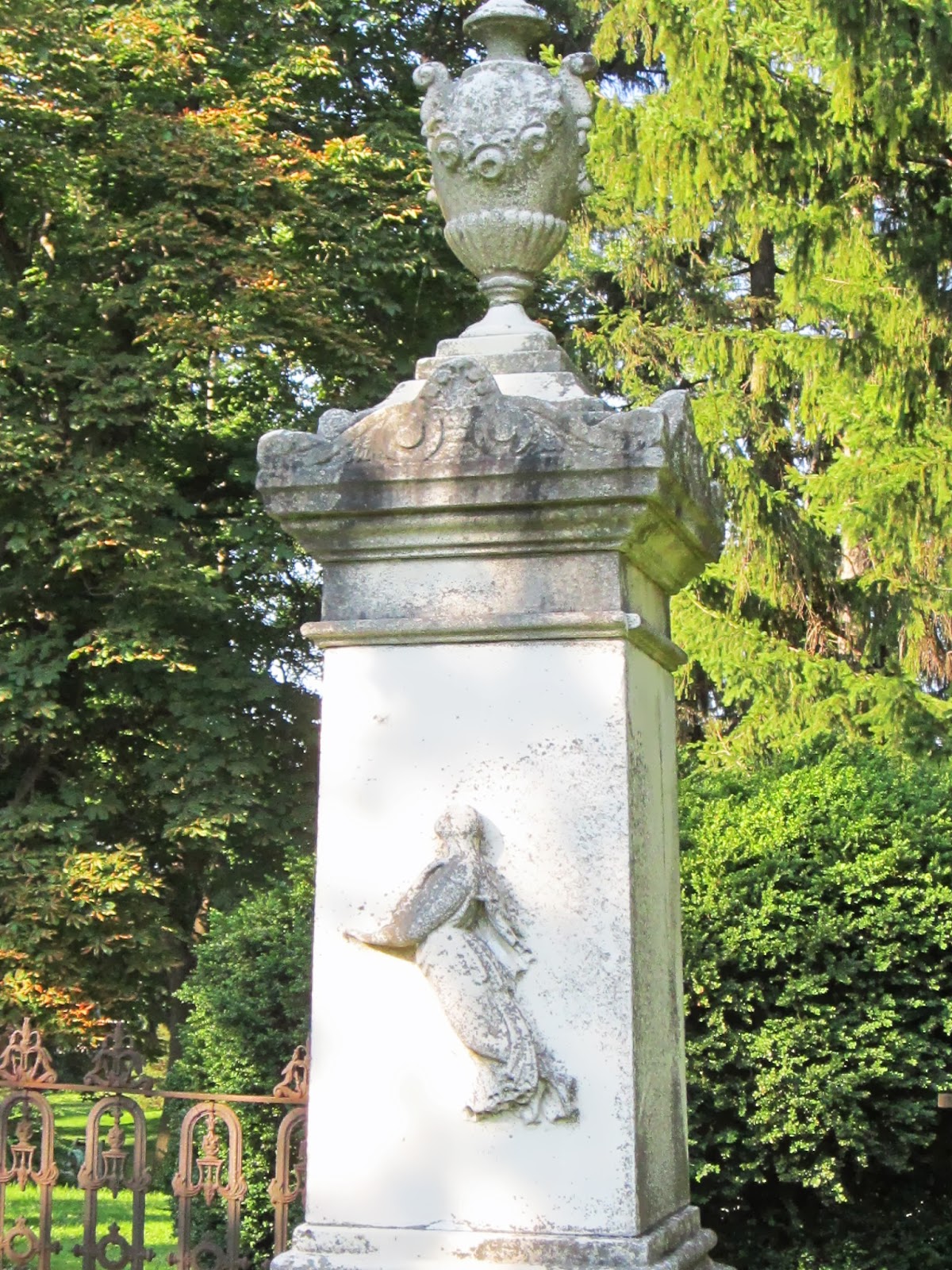 Time for coffee and a study in contrast.  Always go with Balzac’s when in Stratford or Toronto; they seem to take their coffee making seriously (have yet to try Kitchener or Liberty Village).  Ordered the very same thing as last time and was handed a plastic beaker filled with ice and mocha mix.  I looked at in disgust and questioned the server.  What is this?  Did you brew an espresso in the last 30 seconds?  Where is the milk? The server didn’t give a damn and looked at me like I’d just grown a second head.  What a vile drink.  I hate to say it but I think you’d be better off at Starbucks when in NOTL.  Interestingly, Tim Hortons was turned down for a spot in town, but, they let Balzac’s and Starbucks in.  The patio at The Queen’s Landing does a nice dessert and cappuccino.  If all else fails, head there.  Recommend the crème  brulee. 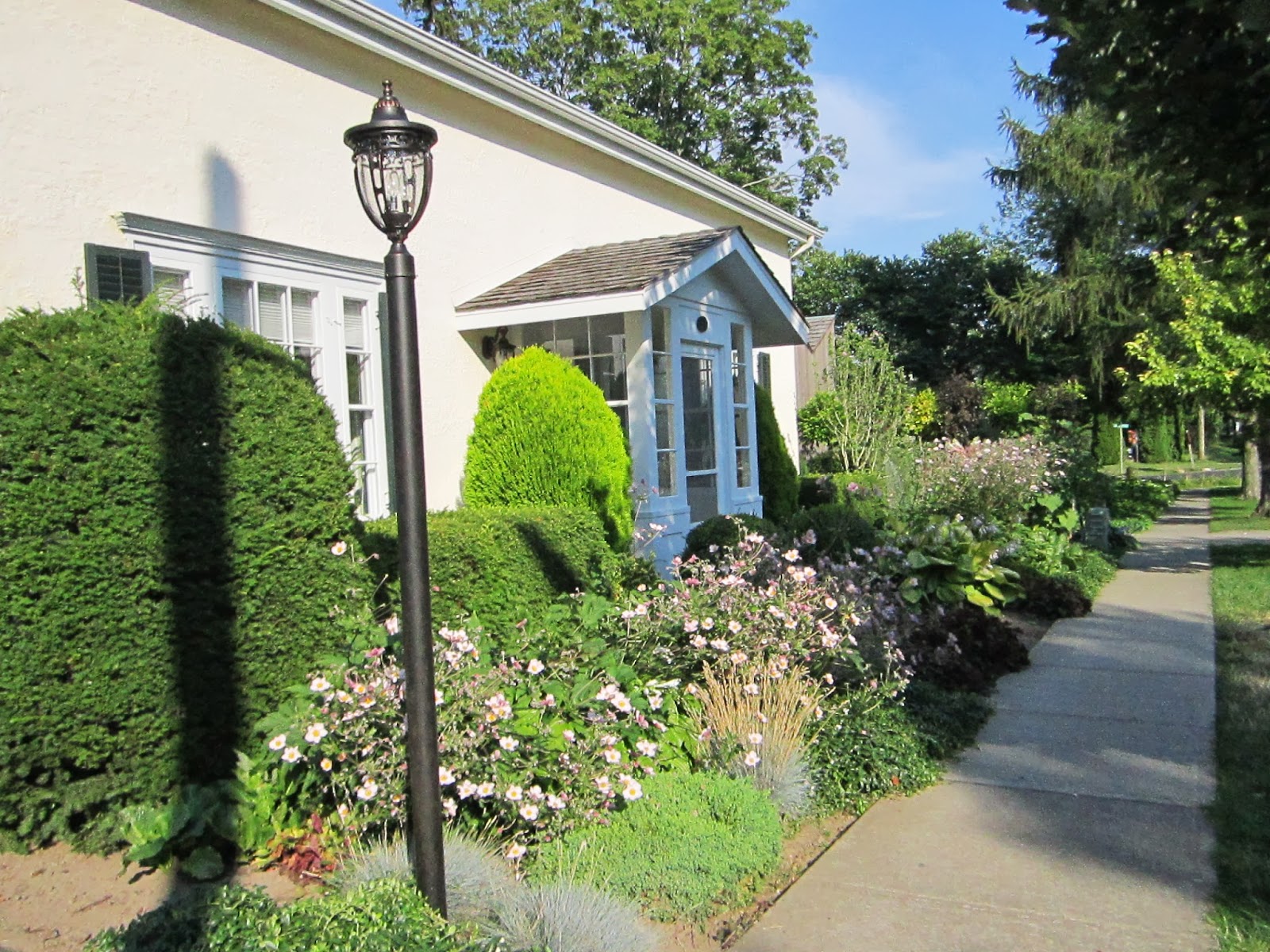 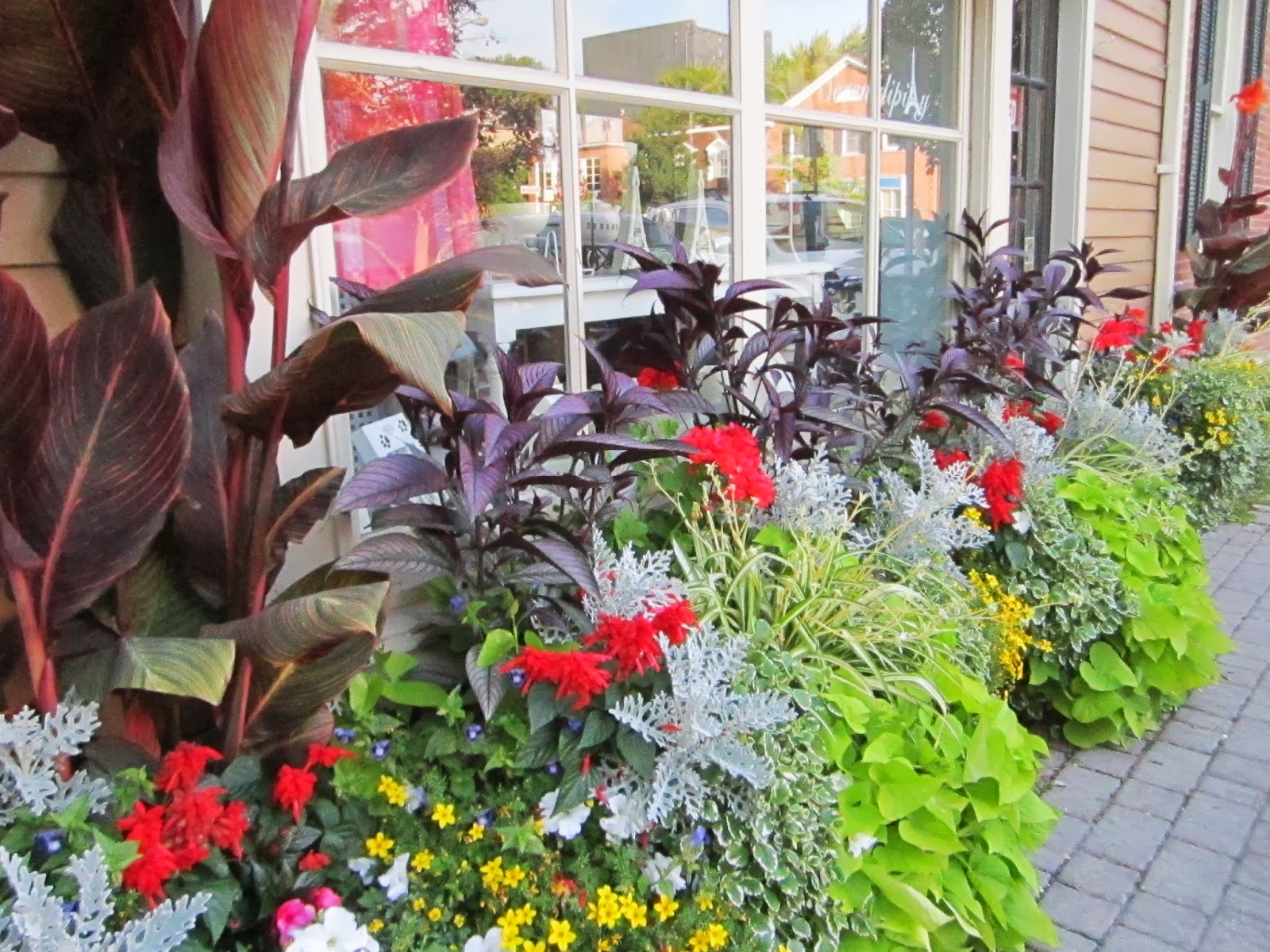 A family tried to convince one of their number that the Public Washrooms are OK but she would have none of it. I would agree with the family here.  Having considered publication of “Where To Pee In Ontario”, this would be one of the better spots.  FYI.


The Hanging Gardens of NOTL. 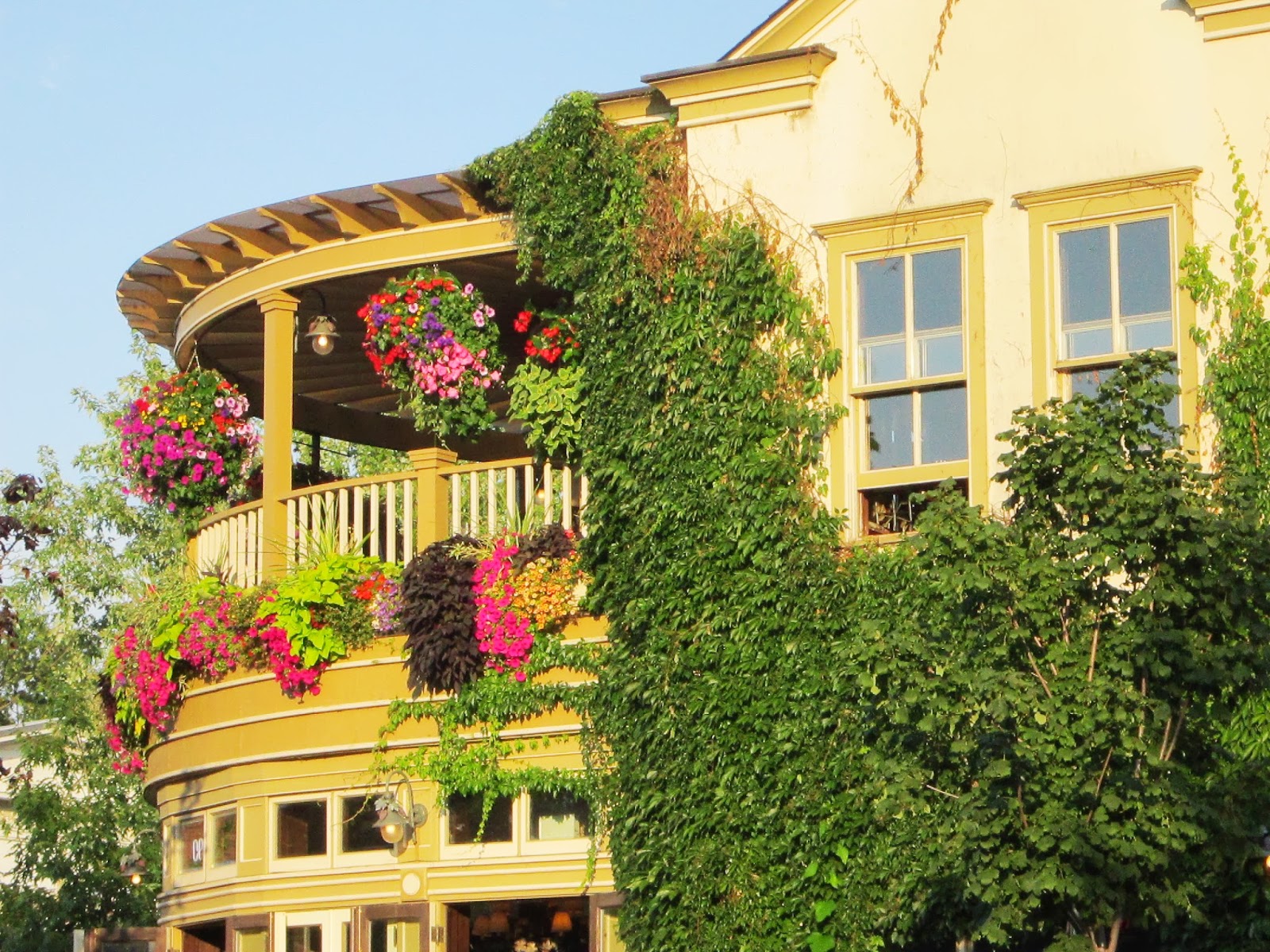 Quick whip through Crabtree and Evelyn.  If you can’t get to a shower before the show, then at least give yourself a spritzer.  Like my lipsticks, my perfume is being discontinued as Ms. Hicks’ contract is running out.  But let’s not turn this into this into an “exercise, salad & make-up post”.  I promise, no pictures from Sephora.  Not that I ever would; I’ve never been in there. 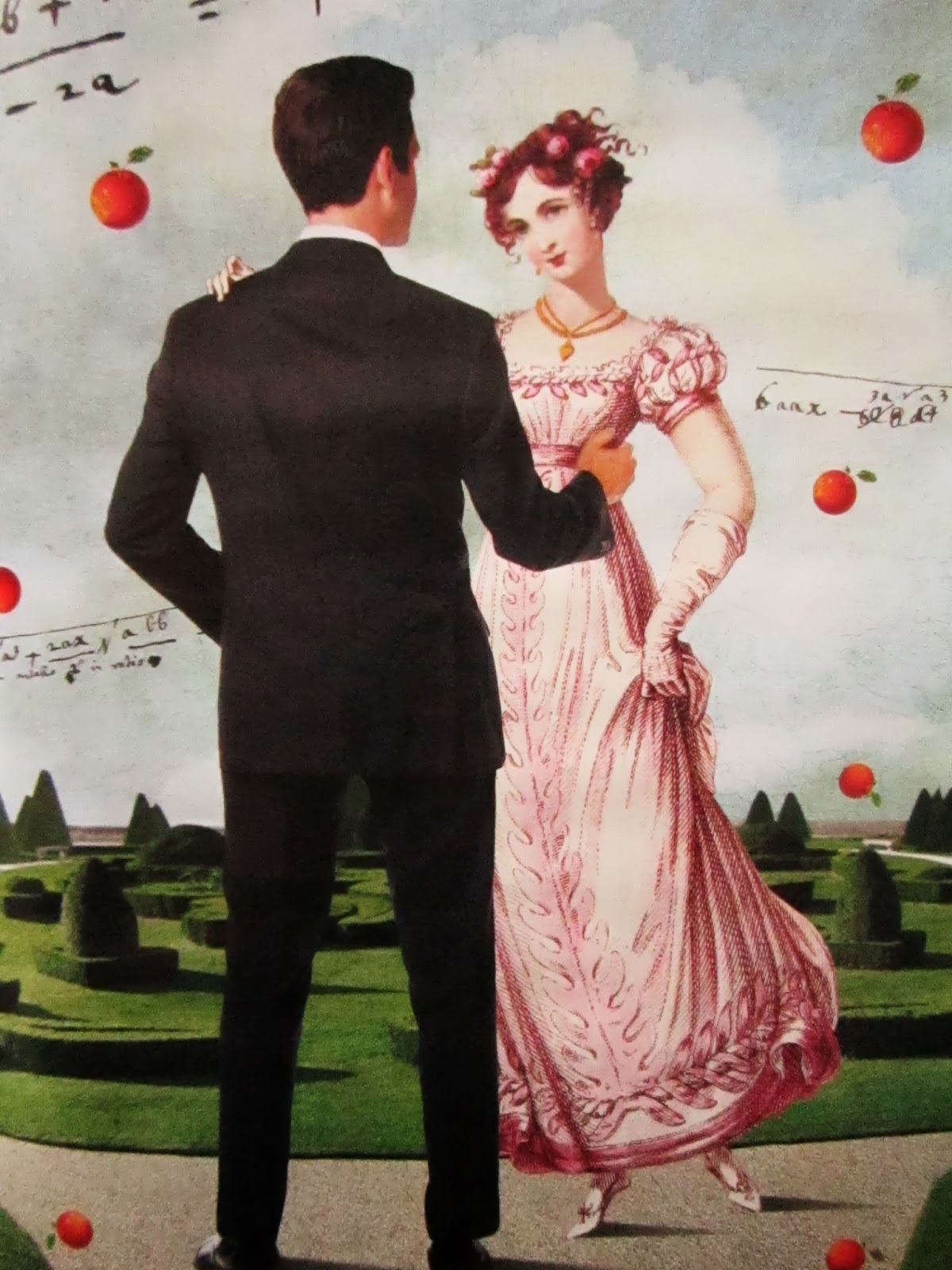 Time for Arcadia by Tom Stoppard.  This is an exquisite play and I cannot fault it at all.  It’s a mystery set in both the 1800’s and modern day, it alternates back and forth and is crammed with references to early English gardeners to Quantum physics and there is great line about throwing physicists off a cliff but won’t spoil the punch line here.  It ends beautifully; the music and lighting are very nicely done.  Would love to have seen Bill Nighy in the UK version.


Did you know they sell Preparation H at the gift shop?  Oh, yes.  In fact they had a run on it because the front row seats at the Studio Theatre are so damned uncomfortable you’re going to need it about a quarter of the way through the show.  (Just starting to get all the feeling back in the buttocks and it’s now Friday.) Suffice to say, pick anywhere but Row A.  Bottom line (excuse pun), a great show; wouldn’t want to see it at the Festival Theatre as some have suggested.  The studio is a nice, intimate space.


Crawled home; this is the QEW remember and construction has been ongoing for what, four years now?  Not sure if I’ll be around to see it completed.