People Watching-Niagara on the Lake

Yes, we have no smoked salmon! 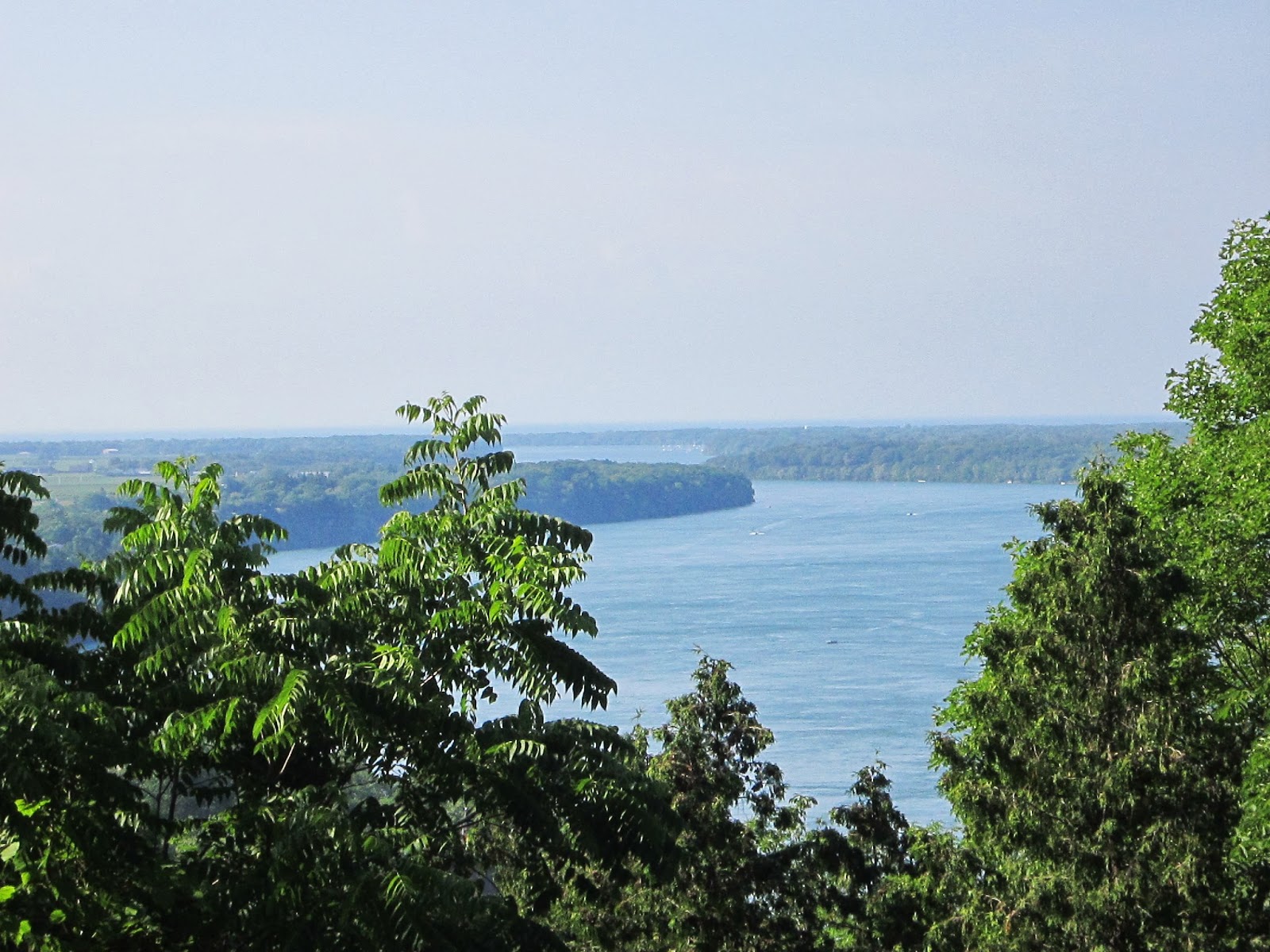 Amongst the great questions of our time, none present so great an opportunity for debate as, “Is Afternoon Tea complete without smoked salmon sandwiches with the crusts cut off?” It had been two years since I last took Afternoon Tea at the Prince of Wales and the first thing to jump out at me was no salmon on the plate.  The horror!  It has been replaced by some kind of salmon puree in a frothy, cream cheese-like spread.  It was lacking in the oomph department. According to our hostess, Sandy,  they are catering to the masses who aren’t that keen on fish.  Before you think I’m blowing this completely out of proportion, I noted that the guests at the next table (all three of them) were wondering where the salmon was, also.  And, they took considerable time filling in the comment card calling for a return to this sandwich filling. 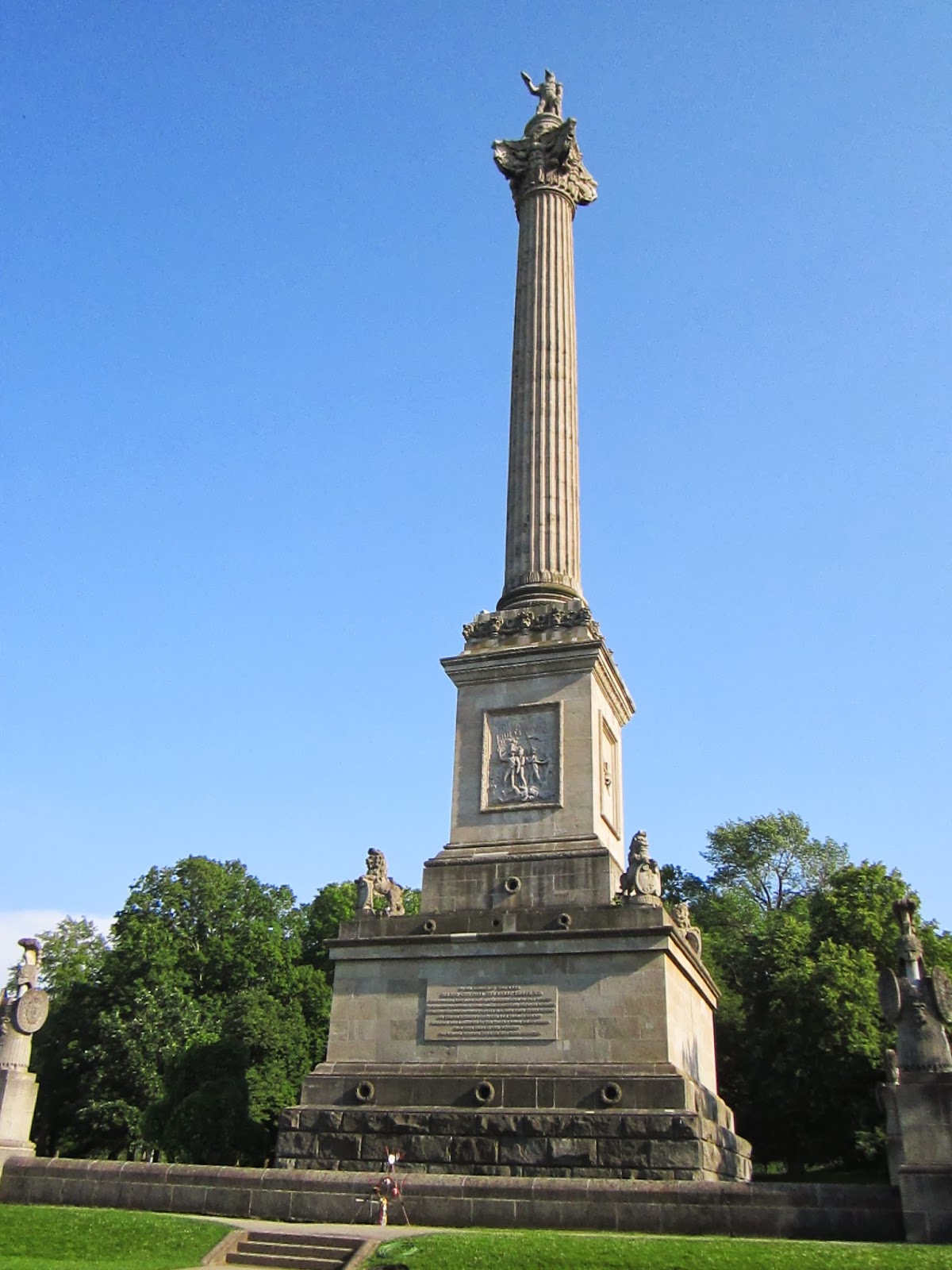 Served in the Drawing Room of the great hotel, tea is a fine treat complete with warm scone, cream & jam, pastries and the requisite egg, ham & cheese, cucumber and of course salmon sandwiches.  This is a very intimate drawing room.  Reservations are recommended and I would suggest asking for the table by the mirror- comfortable wing back chairs and a good view of the room.  Alternatively take a table in the sunroom and people-watch the crowds go by.  Go with a 3 o’clock sitting-the rush is over by then.  I like the new uniforms-black dresses and white collars.
Things were very 19th century what with all this Edward VII watching and a Tapestry interview on the drive in about journal keepers of the 1800’s writing for posterity.  And there I was scratching away at my little black book while drinking copious amounts of tea.
﻿ 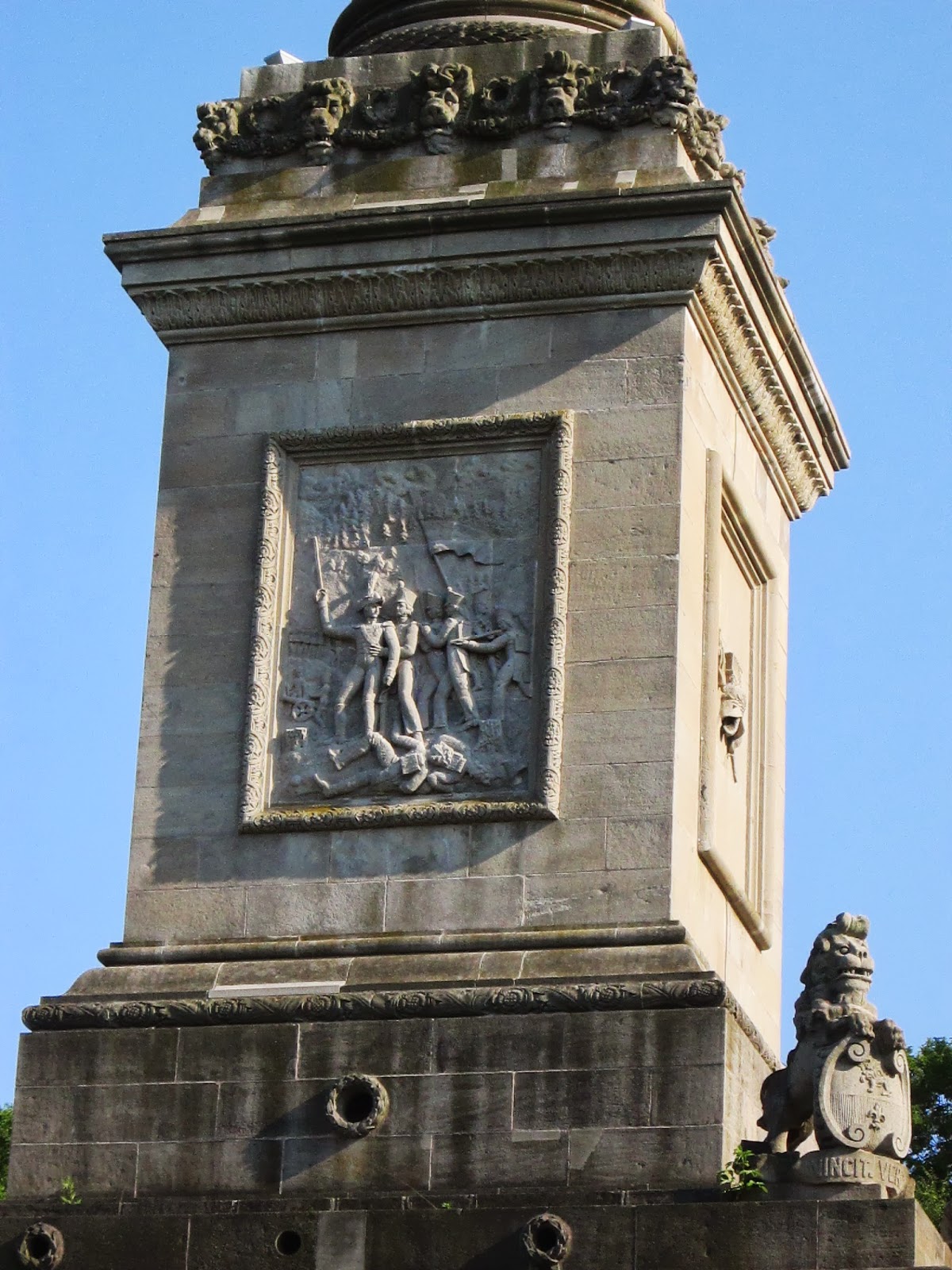 Took a run over to Queenston Heights to burn off the tea.  I think most people tend to miss this during their visit to the area primarily because they can’t find the correct driveway with which to get into the place and then they wind up on the traffic circle where they get really confused.  Traffic circles still being quite an alien concept to most North Americans.  There’s lots of parkland and lots of shade.  The Brock and Secord monuments are here.  At the foot of the Brock monument, someone has placed their own memorial to Tecumseh.  (Don’t think he’s mentioned on any of the plaques, either.)  There were a number of people making the climb from Queenston proper to the Heights.  Not to be undertaken lightly.  It’s steep climb in cool conditions and I didn’t see a defibrillator anywhere. 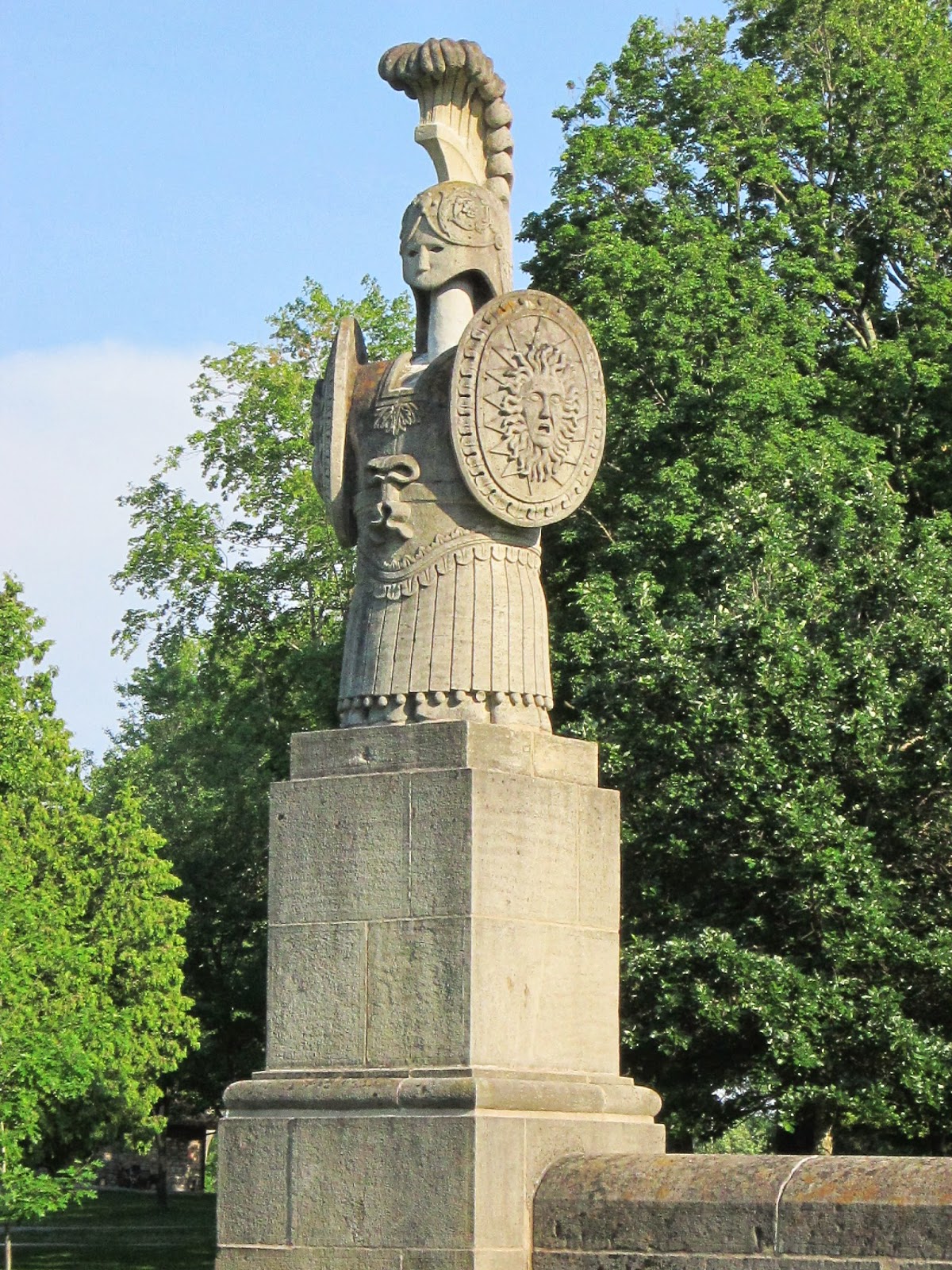 Remember when I said don’t complain about the heat?  You did not listen to me, did you?  First you whined about the cold spring and when Summer arrives (right on schedule) you complain about the temperature.  The walk from the car to the hotel was just about bearable and I must admit I did not want to step back into the humidity.  I had found the last shady parking space so that was a bonus.  Debated whether to move at all because in addition to the regular tourists and the Shaw Festival, the Music Festival is also in full swing and that means that if you vacate your space to travel around the area you may be up the proverbial creek when you come to find a spot at show time. I would say every guest that walked in the place was thankful to be in air conditioned comfort (although the cream was struggling to keep its consistency under the conditions).  See SCONE TO JAM TO CREAM  paper for a look at the precise ratio of topping to scone required for optimum enjoyment. 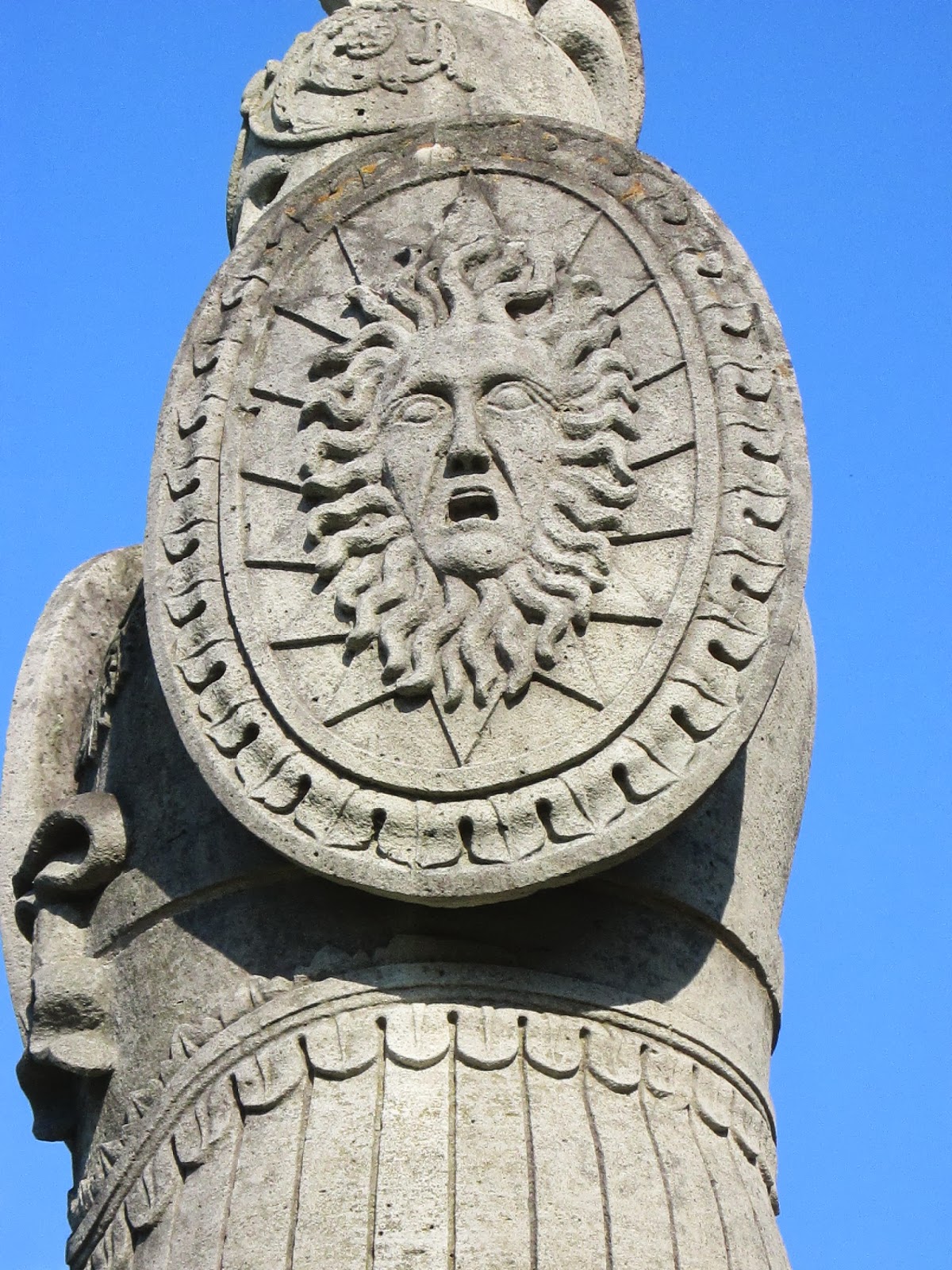 Hello to our American cousins… 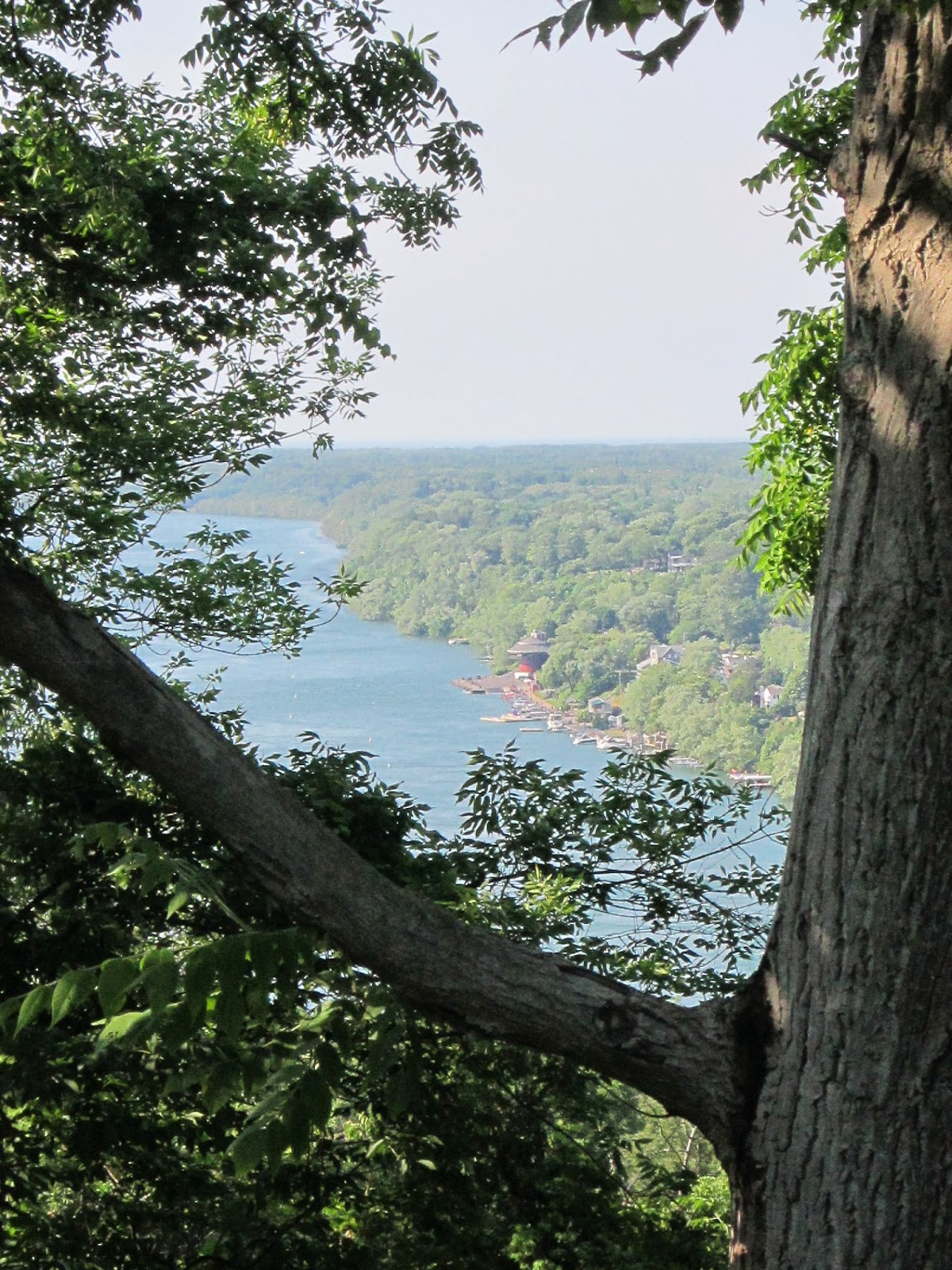 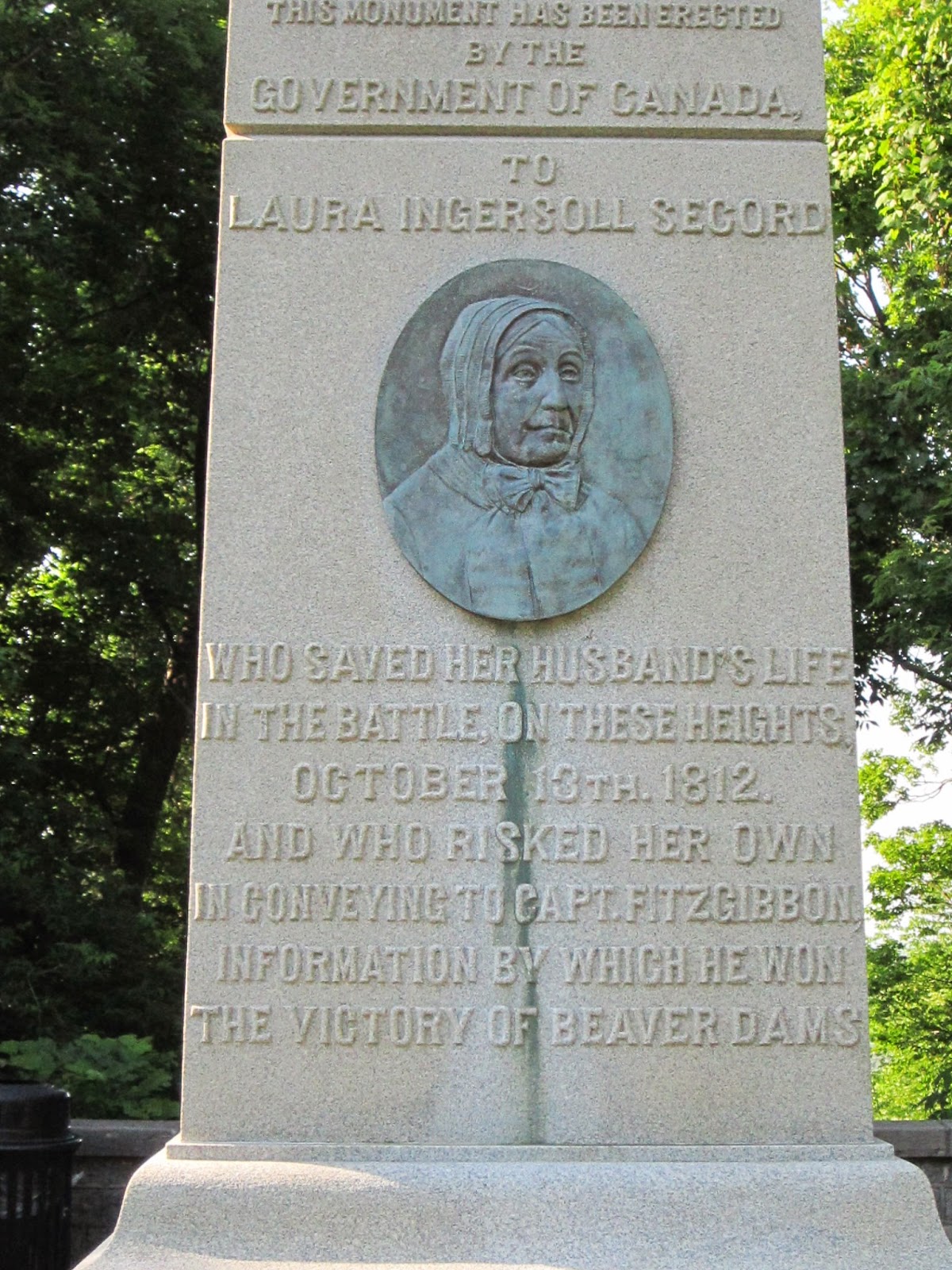 Note to self:  even though it’s sunset, don’t sit on a concrete bench that’s been in the sun all day.  The radiant heat will fry your backside and suck what little energy you have left. 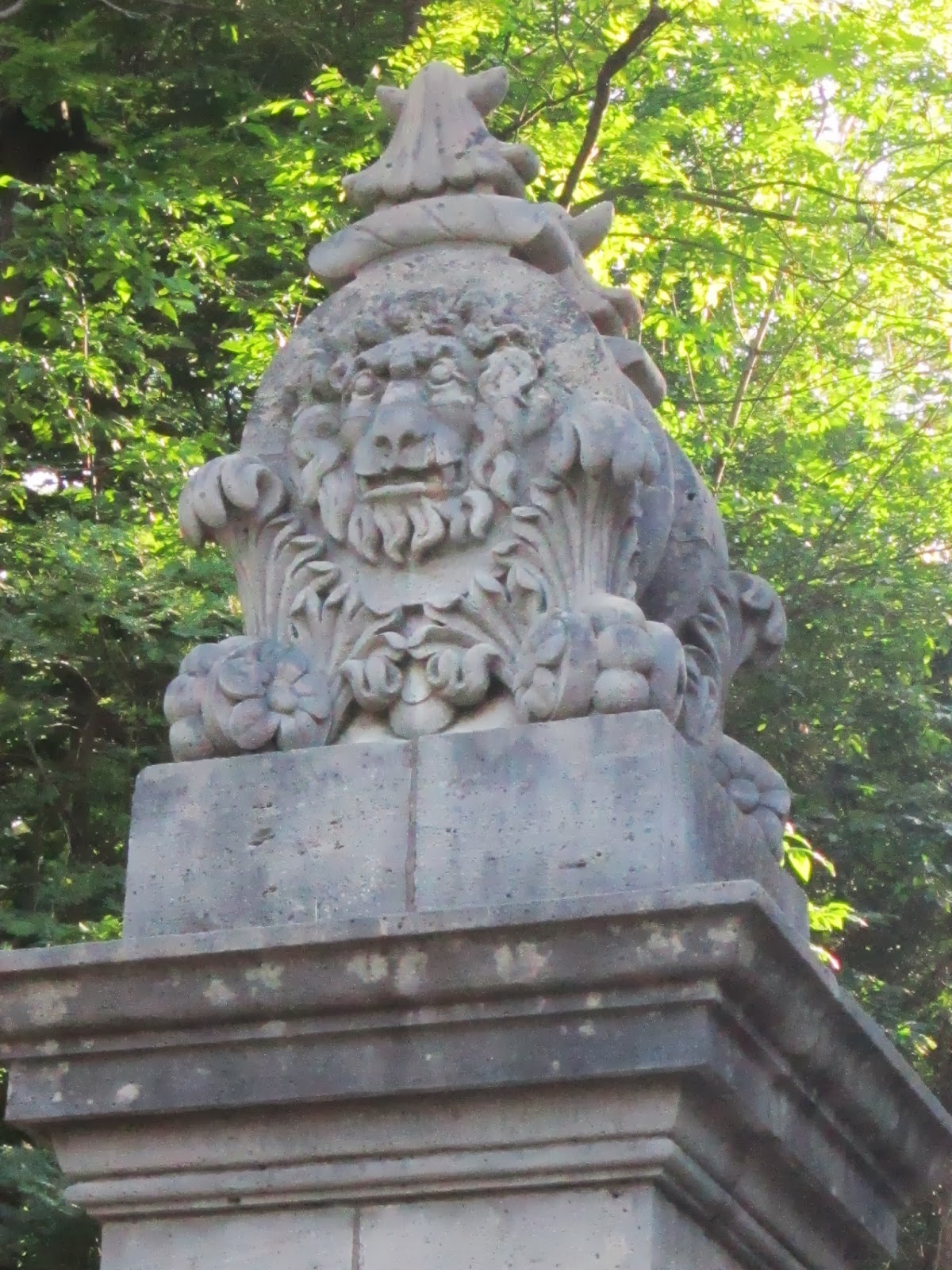 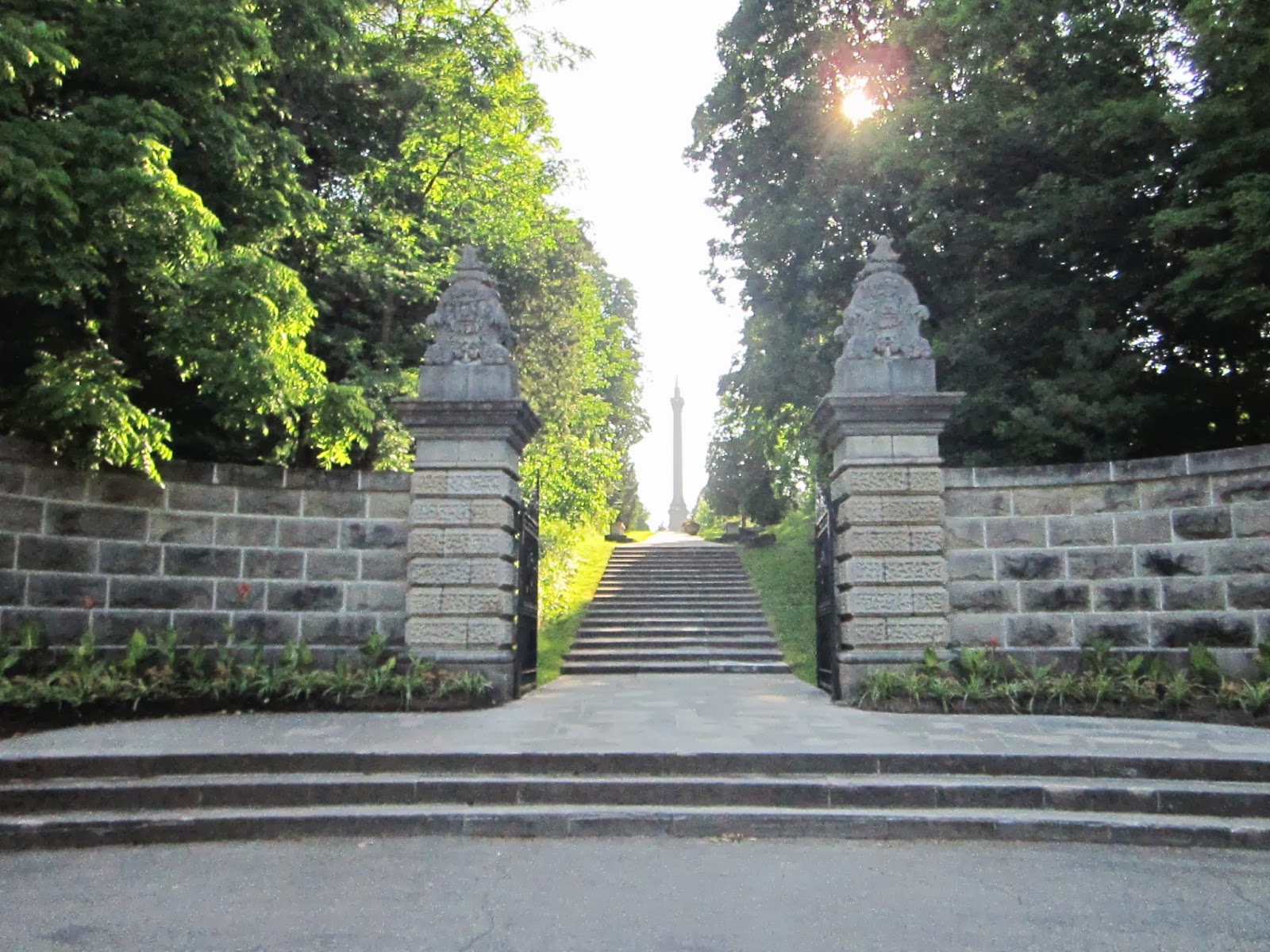 The speed limit on the Niagara Parkway is 50 kmh.  However, the tourists drive 30 and most everyone else would be content to do 70.  Patience is tested and double yellow lines are crossed.
Time for a small jaunt through St. Marks.  Did you know about the Summer concert series?  Have a look at NIAGARA MUSIC FESTIVAL . 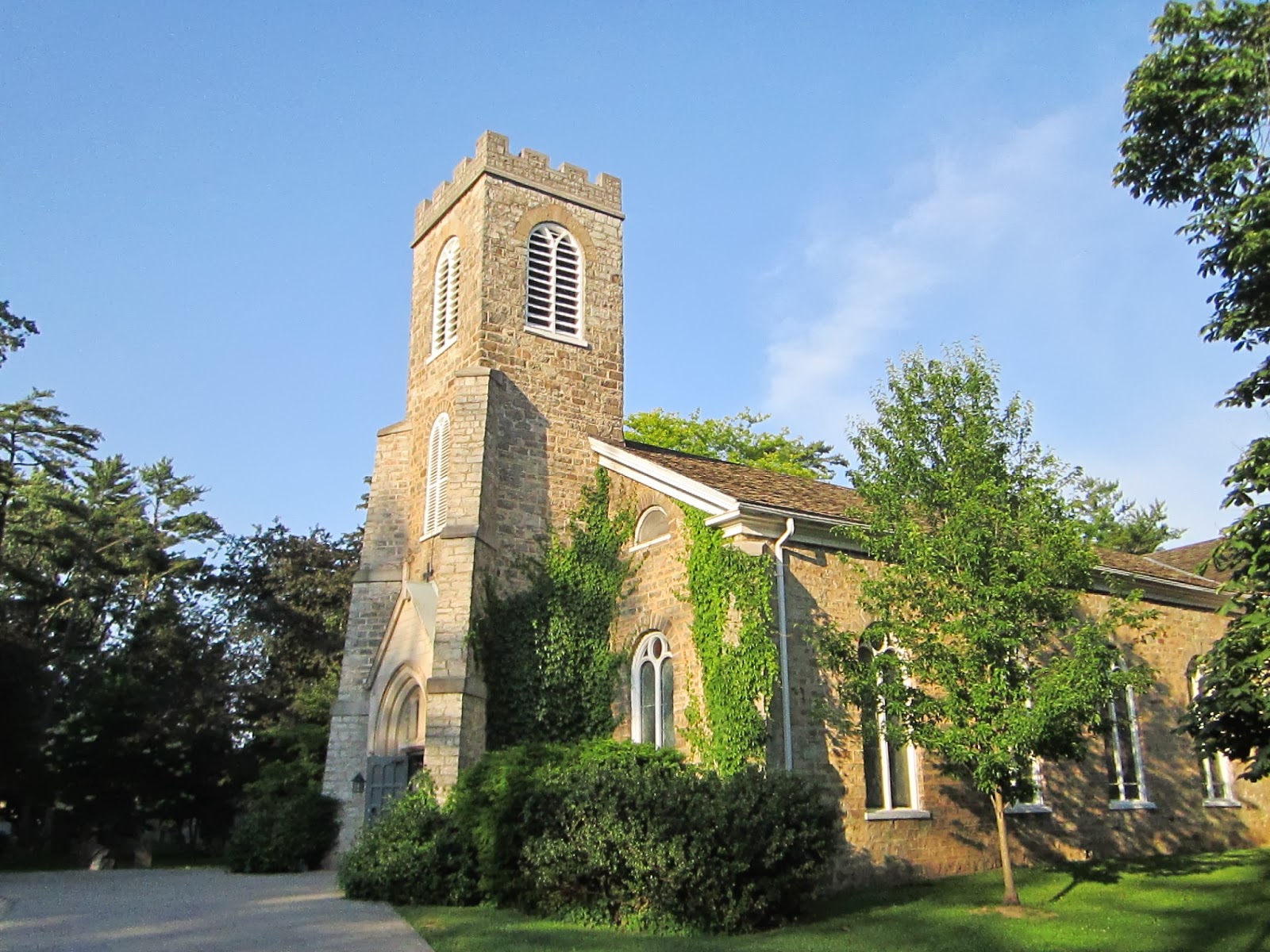 Requisite pre-show coffee.  2.5 inches of whipped cream atop the Frappucino.  Shudder. Two teachers grading papers in the corner.  They suspected one student of plagiarism and I got a crash course in how to prove it.  Two books to put on the list- Malcom Gladwell’s What the Dog Saw and How to Create the Perfect Wife by Wendy Moore.

Full house at Major Barbara.  A play you can sink your teeth into.  Good comedy/drama mix clocking in at nigh on three hours so plan your visit accordingly. Excellent cast; lots of favourites including Benedict Campbell, Laurie Paton & Nicole Underhay.  Three cushions figured prominently.  One wouldn’t stay where it was supposed to and the cast took turns trying to prop it back up, to no avail.
Still on caffeine high.  Starting petition to bring back smoked salmon!