First long weekend of the Summer? Not quite.

The long and cow-pat strewn road back into the work week after a Victoria Day weekend(it’s now Thursday and I'm still collecting my thoughts); difficult to get the right balance of anti-histamines, cocktails and wine.  Benadryl-man’s great undoing. I envy those that can isolate their allergies to one week and suitably medicate themselves. Naturally, it’s been a banner week for Rob Ford Watch.  I’m not convinced about the Crack use.  (And why are we so enthusiastic about handing over 200K to known drug dealers?)  While Ford’s actions speak volumes, it strikes me that he would be more incapacitated than he already is if he’s added Crack to his food and liquor mix.  Remembering Dave Chappelle’s Rick James. “Cocaine is a helluva drug.”  Brilliant.


Friday saw the last hurrah of The Widget Maker.  A little Dutch Courage as matrimonial bliss awaits.  I’m fascinated by wedding plans.  In this case, the entire entourage is heading to the other side of the country to witness the exchange of vows.  The labour and cost seem so unnecessary. I stand by Mae West-I'm not ready for an institution, either.

We should work but one day a week and take the other six to enjoy the glory that is nature. (Thoreau)

﻿
A three day weekend and yet another call for its rechristening; CBC suggesting Stompin’ Tom Day. If you have not already done so, please try Mrs. Brown with Dame Dench.  Another side of Queen Vic.  I like the idea that she and Albert were so in love that she had no choice but to go into deep mourning. Contrary to popular belief, it is not the first long weekend of the summer, but the last long weekend of spring.  Letters to the Editor flood in year after year with reminders that it is in fact June 21 when summer begins.  This comes in handy later on when we need to remind ourselves that summer is still going, even at Labour Day.  It’s not all doom and gloom.  If only we could get Canada Day fixed on the calendar as the first Monday of July.  Who amongst us has not despaired at having the day off Thursday only to return to work on the Friday?  Surely we could get a petition going?  The fireworks began Friday and carried through ‘til Monday night. Please explain the decision to light fireworks mid morning.


Slavery did not end in this country, it just got called something else-employment.


Soaked up a little culture on the Saturday. The Pater had prepared an exotic chicken dish and I was duly impressed with the effort.  Stuffed to the gills there was nothing left to do in the late hours but immerse myself in a little cable TV.  The Widget Maker was stunned to learn that I don’t have cable.  How am I coping?  We’ve been down the NO CABLE TV route before and we are approaching the second anniversary in August.  I live to tell the tale.  However, I did enjoy trawling through the channels.  Mary & Max, an exquisite claymation from Australia voiced by Toni Collete and Philip Seymour Hoffman amongst others.  Very nicely done and great to hear Bach’s Zadok the Priest popping up out of the middle of nowhere.  Sean Penn in The Assassination of Richard Nixon. A palatable SNL with Tracy Morgan’s Al Sharpton. Finished off with The Office.  Not as difficult to watch as the original; you don’t squirm in quite the same way.  And the usual wee hour mix of people hawking anything from hair removal to hair replacement.


You should never weigh more than your refrigerator.


Sunday Brunch as a matter of course.  Apparently our early ancestors scavenged for human brains.  They enjoyed tapping into a random skull for this delicacy.  I prefer eggs and sausage myself.  If you like Bread and Butter pudding try this BRUNCH IDEA .  Nice leisurely start to Sunday.  David Sedaris weekend on CBC; excellent comedy.  Colm Torbin to be added to the reading list.  I could listen to this man speak all day.  He reminisced about picnics at the seaside when he was a boy and how he always waited for the silence in conversations because he knew that, after ward, the adults would say something unexpected and very interesting.


Burned off the calories on the Waterfront Trail.   More about this in future Tour of the Neighbourhood posts.  Still not convinced Hamilton has anything to offer?  Perhaps the upcoming posts will change your mind.  Must check in on progress with the Chippewa Trail.  I managed a couple of hours and like most walking, kept in mind that you can travel any distance, but, can you make it back that same distance?  Always happy to oblige when asked to take someone’s photo.  Curious specimen at the end of the pier.  Someone sporting a horse’s head stood on the wall with his right hand raised in a sort of Power to the People salute. There was a small pleasure craft on the open waters but no one else to appreciate this equine figure. 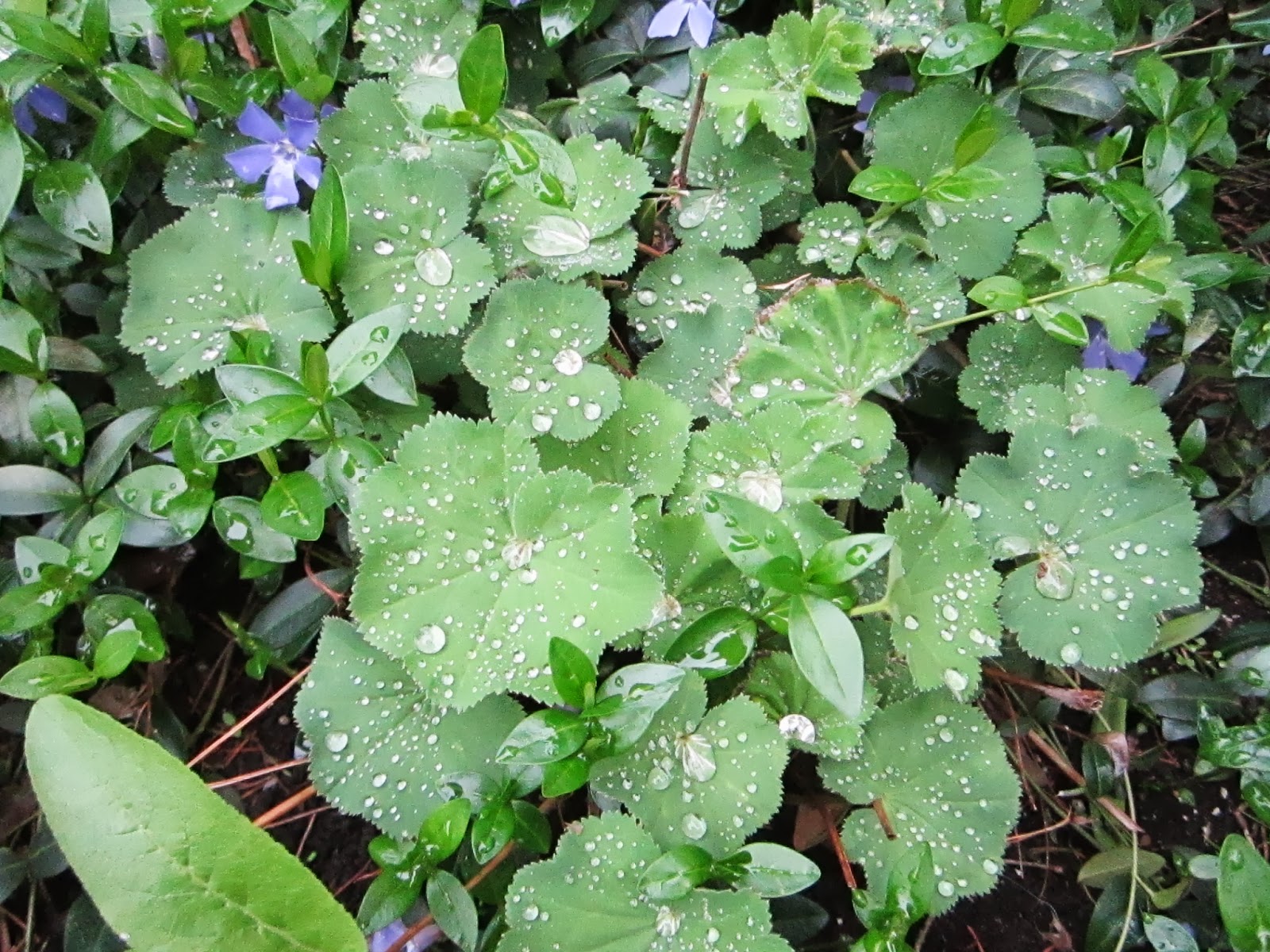 Holiday Monday.  Someone chose early morning to start a woodworking project and the sound of hammer strike continued for several hours.  Temperatures soared to 30C and the masses rejoiced.  It was now or never to get the front garden finished.  Transplanted some perennials and spent several dollars at the garden centre.  Pleased with the finished product. (Remember it's in its infancy.)  One must have patience with the daffodils as it takes an eon for the leaves to die off. 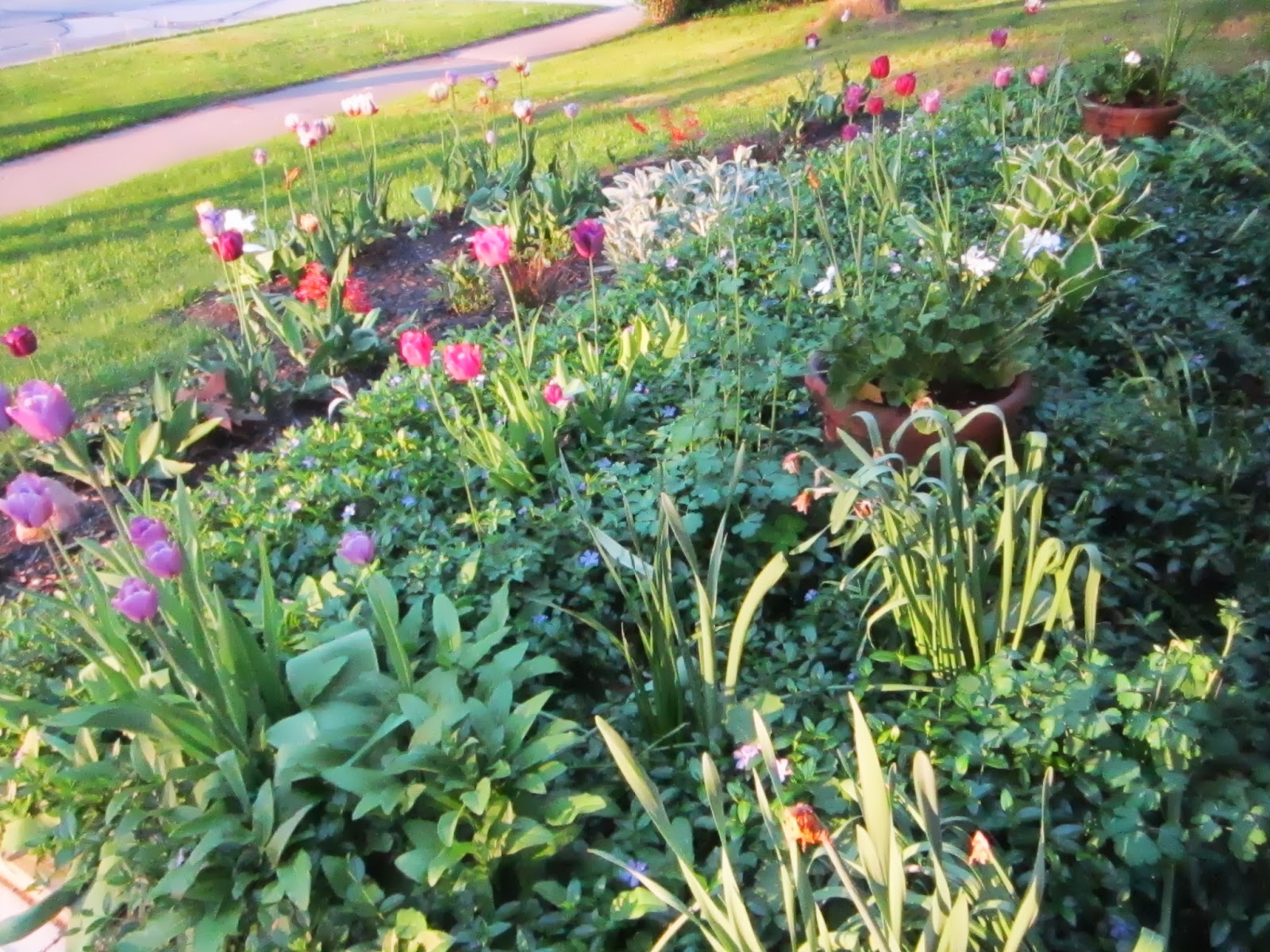 Someone asked if gardening was my hobby.  Well it’s one hobby, it’s exercise(more than most people realize) and it does wonders for the brain.  How do you feel when you’re in your garden or surrounded by plants or indeed, reading a gardening book?  I’ve listened to people get quite choked up when describing the emotions they go through looking out onto their garden.
Then I thought of the rabbit or as has recently come to light, three rabbits.  One can’t be very old-more field mouse then anything.  They love to eat.  And frolic.  Today though, they were in deep cover in my as-yet-to be cut lawn.  And eating weeds; getting down a large dandelion stalk in about three seconds. New leporine Olympic challenge-dandelion/daffodil/tulip triathlon. 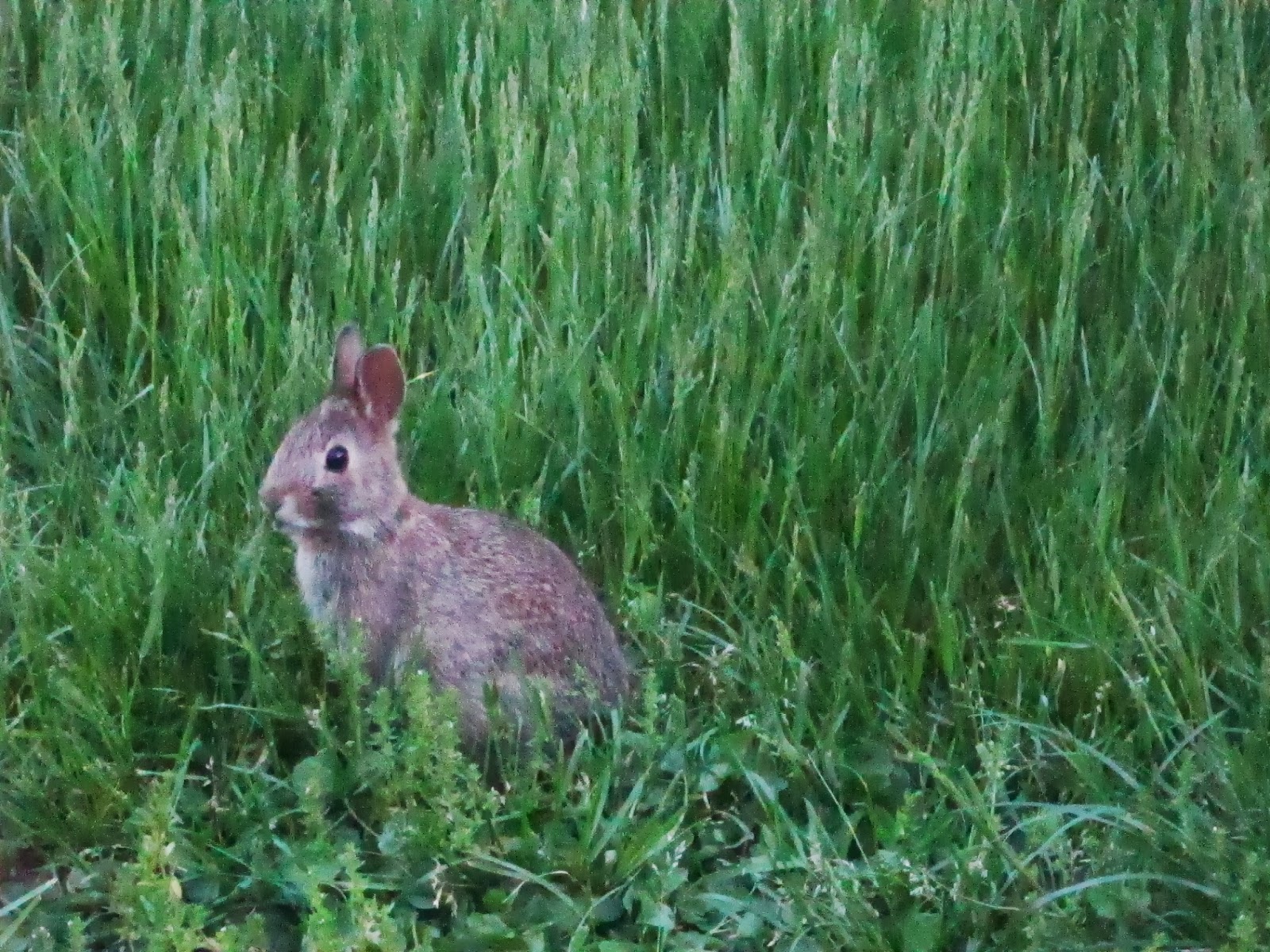 And so life comes slowly back into focus and we return to the alarm clock.  How long does that first day back feel?  I dosed with copious amounts of black tea.  Coffee could be dangerous on Day 1.  Nil discussion on the weekend.  Everyone keeping a low profile and already looking ahead to the next long weekend.  A little humour on Day 2. Q with Conrad Black.  Was Ghomeshi up to the challenge?  How would I prepare for a Black interview?  Keep your Roget’s with you at all times.  Black does not believe the PM’s Chief of Staff did anything wrong.  He was just being a nice guy. It’s Amiel that I have issues with.  Her articles for Macleans rub me the wrong way but I’m compelled somehow to read them.  All the while muttering, “Right-winged, over-privileged cow!” 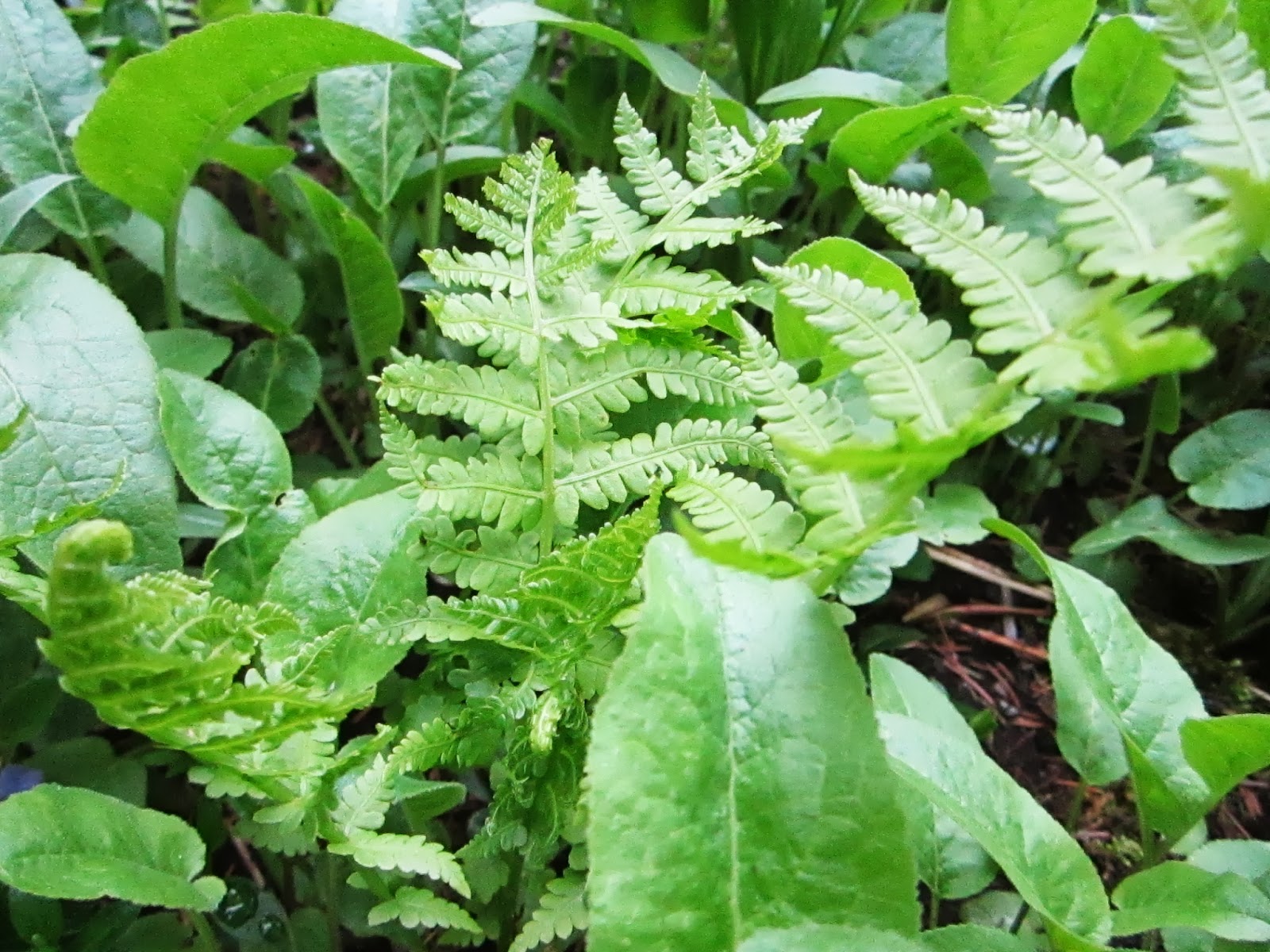 Memories are not solace.
On a more Everyman level, I tuned in to the Bosma memorial. I thought family and friends did a fine job. What else is going on under our noses?  The minister acknowledged the ten year captivity and escape of the three young women and the over six hundred native women unaccounted for in this country.  We now have a second man in custody.  How long before the full story is revealed?  We’ve had to wait four years for a verdict in the Mason murder.  Does having faith in the afterlife mean you accept that this death is God’s will? Or does it merely provide you with comfort that your family member is with God?  Do you still seek your own brand of justice? 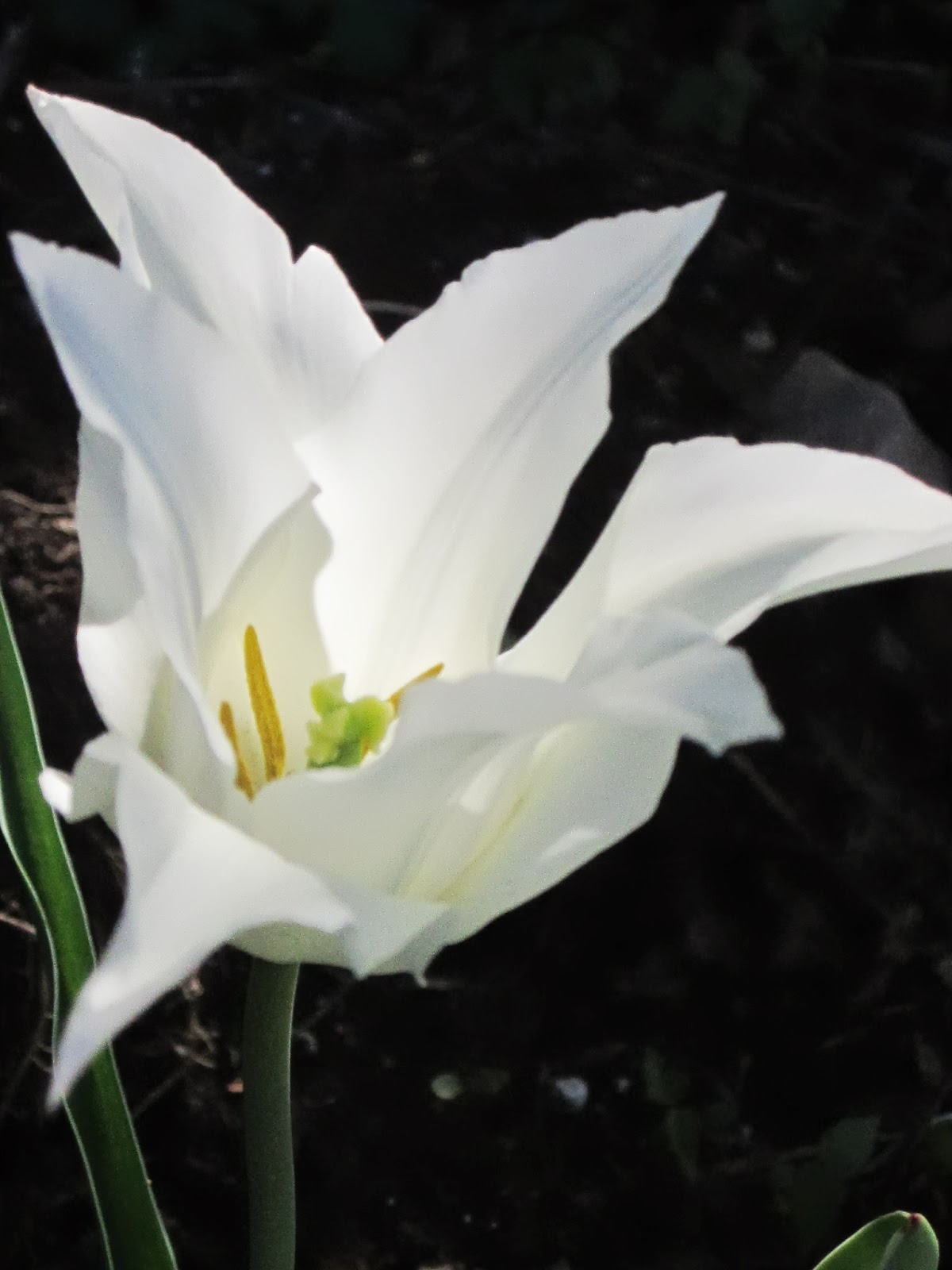 Back to Black who so very discreetly suggested that Mr. Ford not try quite so hard to bring attention to himself.  Will Flight of the Eagle find its way on to my reading list?  Pleased to report that the Trollope is going well.  Nothing like a Christmas story in May.  I’m told the MFK Fisher is in and I’ll be picking it up later this week.