Finally able to leave the chiropractic table.  The grader came by a total of five times and as you know, if you don’t get out straight away and dig out you’re left with a three foot wall of ice.  Storm Watch began Thursday.  A customer and I shared in the hope that a Snow Day was on the horizon.  Not to be; his Widget Maker and mine do not believe in snow days.  We commiserated Friday morning.  I felt that the call may have come about 7AM.  Alas.  And so mid afternoon, with a foot and a half of snow already settled in the parking lot, the Widget Maker and I dug out a path to the road and tackled the snow bank waiting for us.  Yes, the grader had been by twice by 14:00  What are the chances?

I’d like to send a shout out to the driver of the green minivan who sat idly by in the comfort of his warm vehicle and watched as the two of us dug out the lot and the snow bank.  I felt like abandoning my vehicle and going back in the building to see what green van was going to do about that.  At least offer to participate in the clean up;  don’t just swan out of the lot on the back of someone else’s labour.  And I’m also looking at the driver of the multi-story SUV.  Assess the situation and stop driving for a moment.  If you keep driving, you’ll hit me.  Thought for the day:  always look into your turn.  Now when you are 15 feet up overlooking traffic, regard for the safety of others may not be uppermost in your mind.  (I’m supposed to be keeping my blood pressure down but it is challenging with Yo Yo’s on the road.)  The fun continued with a few feet of flakes on the drive.  Ah, the kindness of strangers and their snow blowers.  Only had to dig out one third of it.  Ran the hot water tank dry with a marathon shower and promptly collapsed in the chair.
Medicated myself with back issues of The English Garden and fine Gardening.  Magazines for property owners who hire people to do the gardening for them. 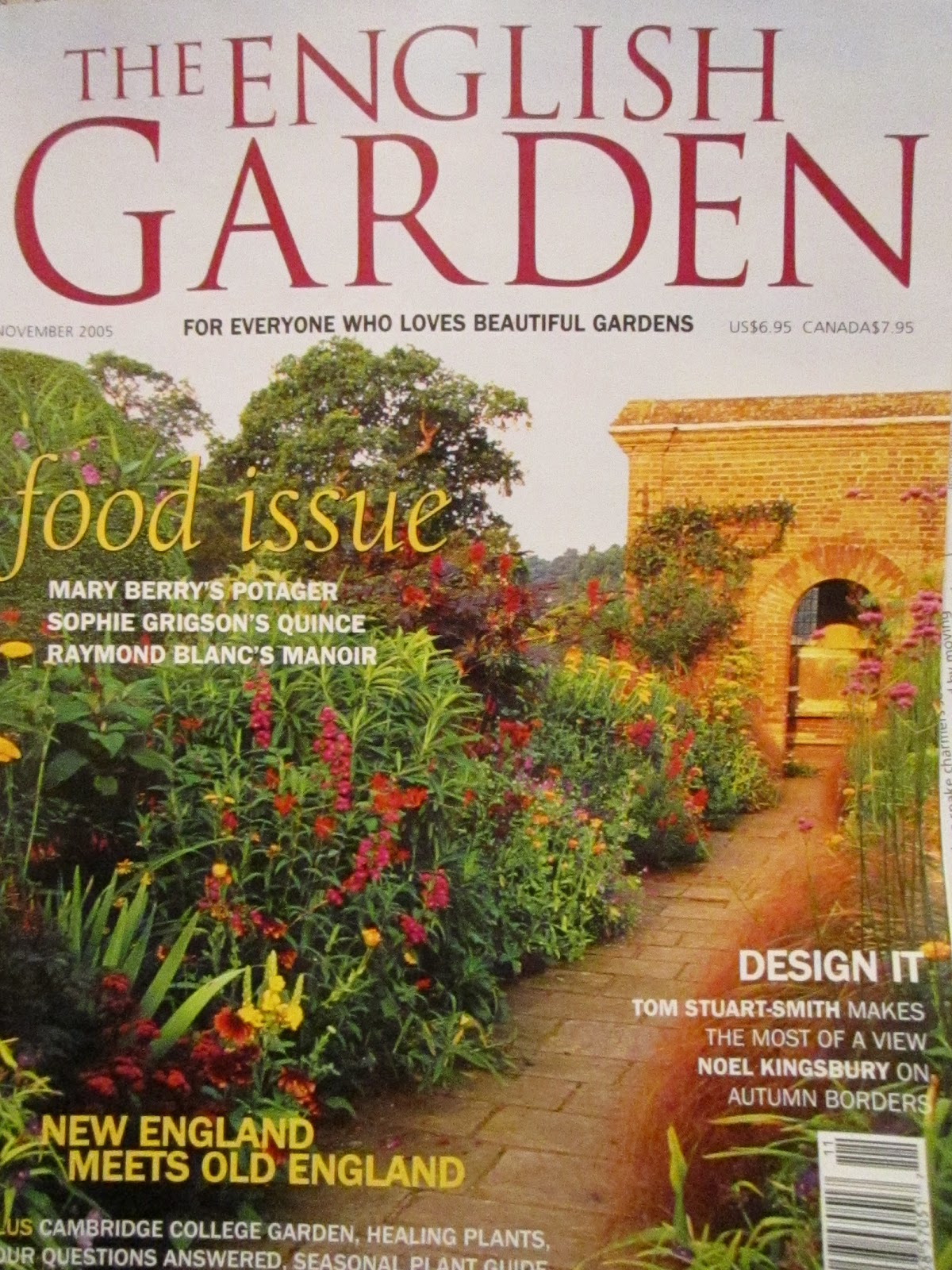 I checked out the back pages-vacation packages in  18th century farmhouses of Normandy or 18th century vicarages in the South East of England.  I pictured my humble garden underneath the snow and wondered if I could apply any of the principles to my own plots.
What a treat to have blue skies and sun ALL day Saturday. Freshly fallen snow has its own unique charm.  A landscape free of foot prints is a treat.  I woke at seven and enjoyed the quiet while I dug out, again.  Set out on the walk.  Double workout as the sidewalks were in an appalling state and the citizens let it be known they were not amused. 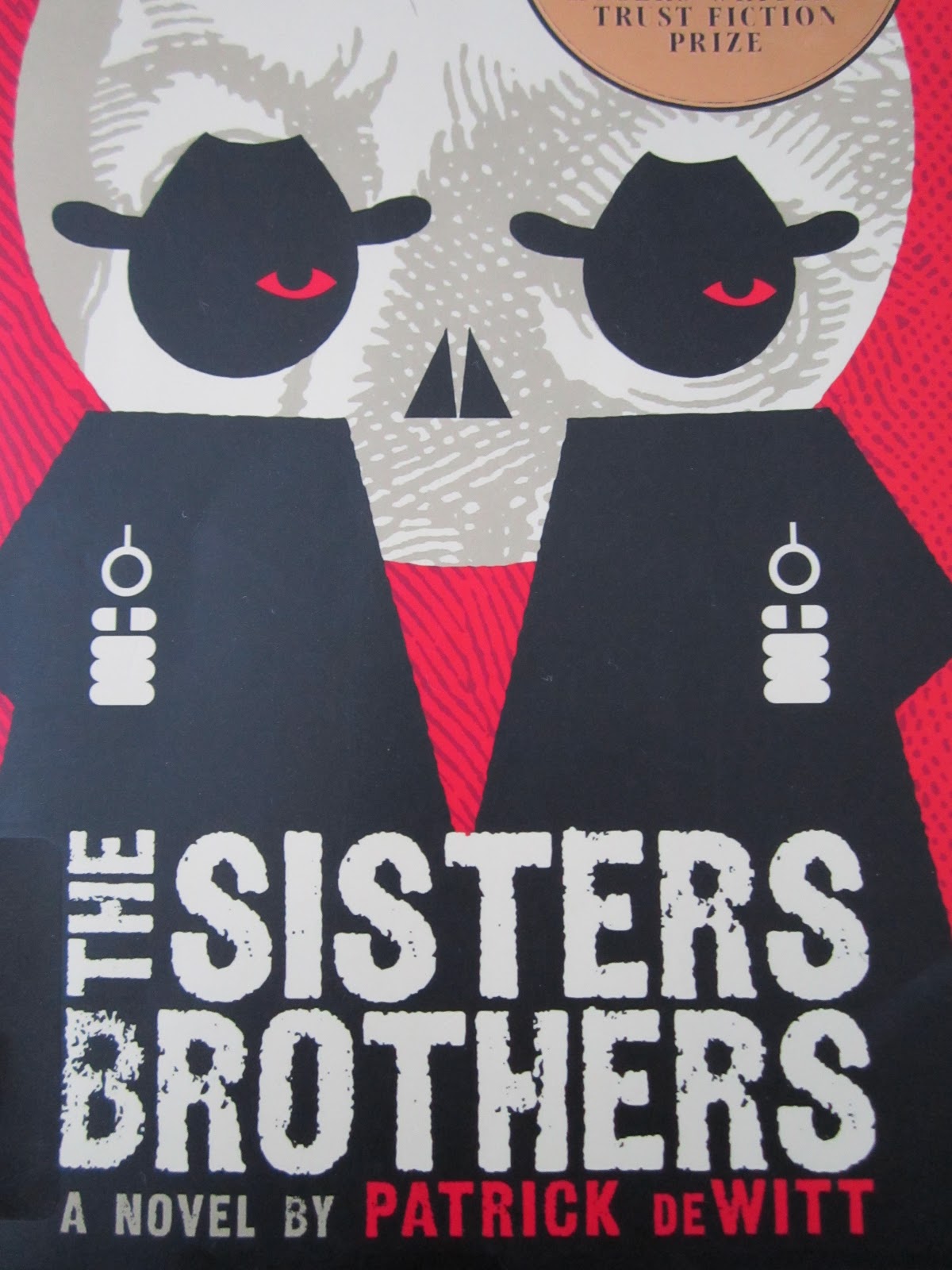 Picked up my books-on tap this week are The Sisters Brothers by Patrick DeWitt (which is a very recent title considering my track record), Joanna Trollope’s Daughters In Law and Travesties by Tom Stoppard.  I missed this play when it came through town a few years back. The Widget Maker contracted pneumonia and insisted on coming in.  GRR.  He very graciously shared his microbes thus rendering me unfit for anything.  Something about men and colds, flu and assorted ailments;  they simply refuse to acknowledge the symptoms and carry on like there’s nothing wrong. I digress.
Also looking at Alone in the Kitchen with an Eggplant (edited by Jenni Ferrari Adler), In Pursuit of Garlic by Liz Primeau and (in light of the gardening magazines) Elizabeth David’s A Taste of the Sun(French & Italian cuisine).  More about these later over on Frederick. 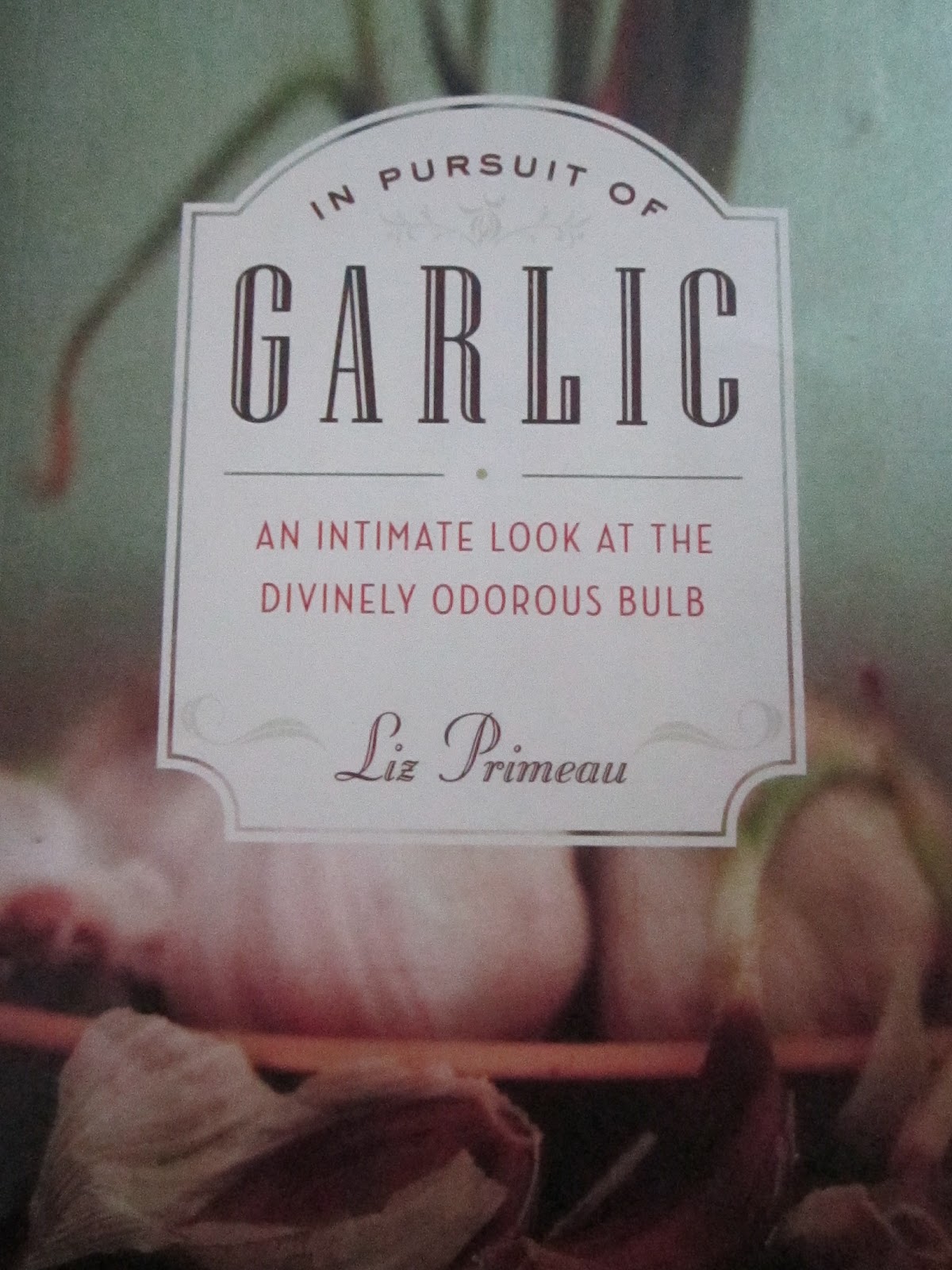 Note:  it's an intimate look at garlic!
Aerosmith flooded the street.  All heads turned to find out where it was coming from.  A motorized wheelchair appeared on the horizon.  Where people will install thousands of dollars worth of stereo equipment in their beloved car, this owner had done the equivalent to his ride.  Like car owners with their stereo cranked, this guy showed equal disregard for those around him.  Most amusing. Here are a few highlights from town.
City Hall. 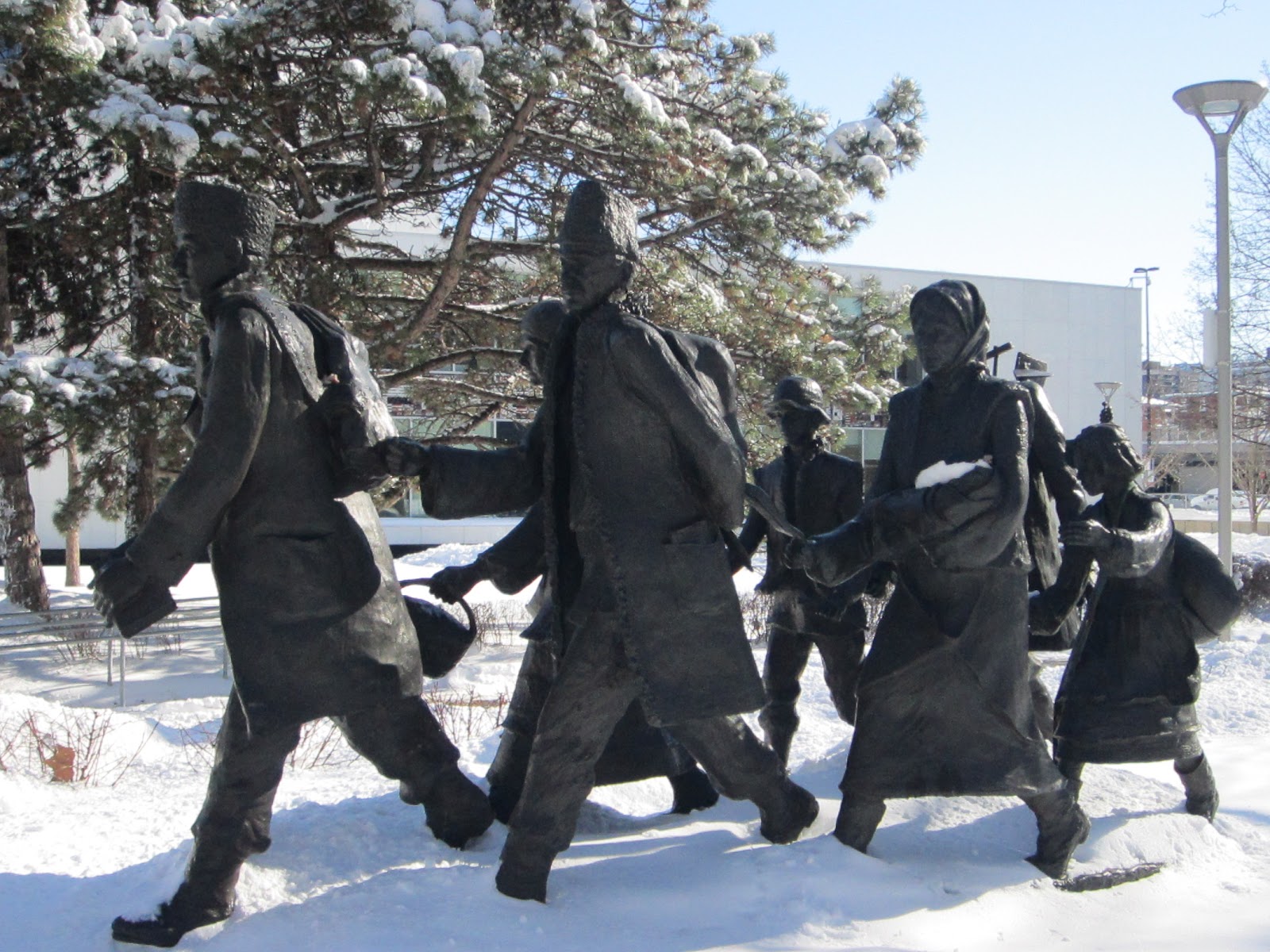 Idle No More had set up a teepee on the lawn.  I expected drumming but it was very quiet.
The very fine Duke Street listed buildings.  One is up for sale;  not sure what they’re asking. 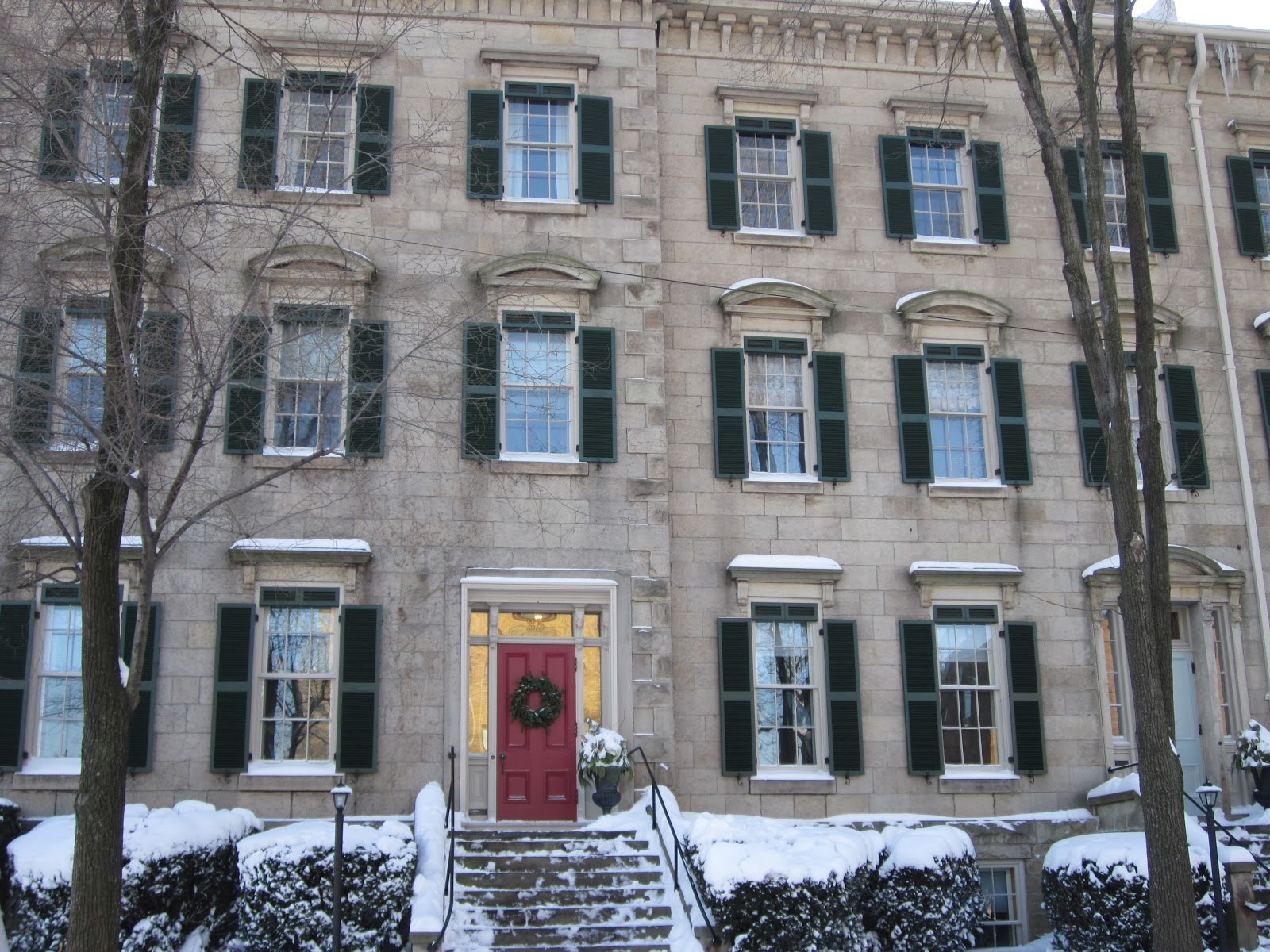 Some nice paint work adding a splash of colour. 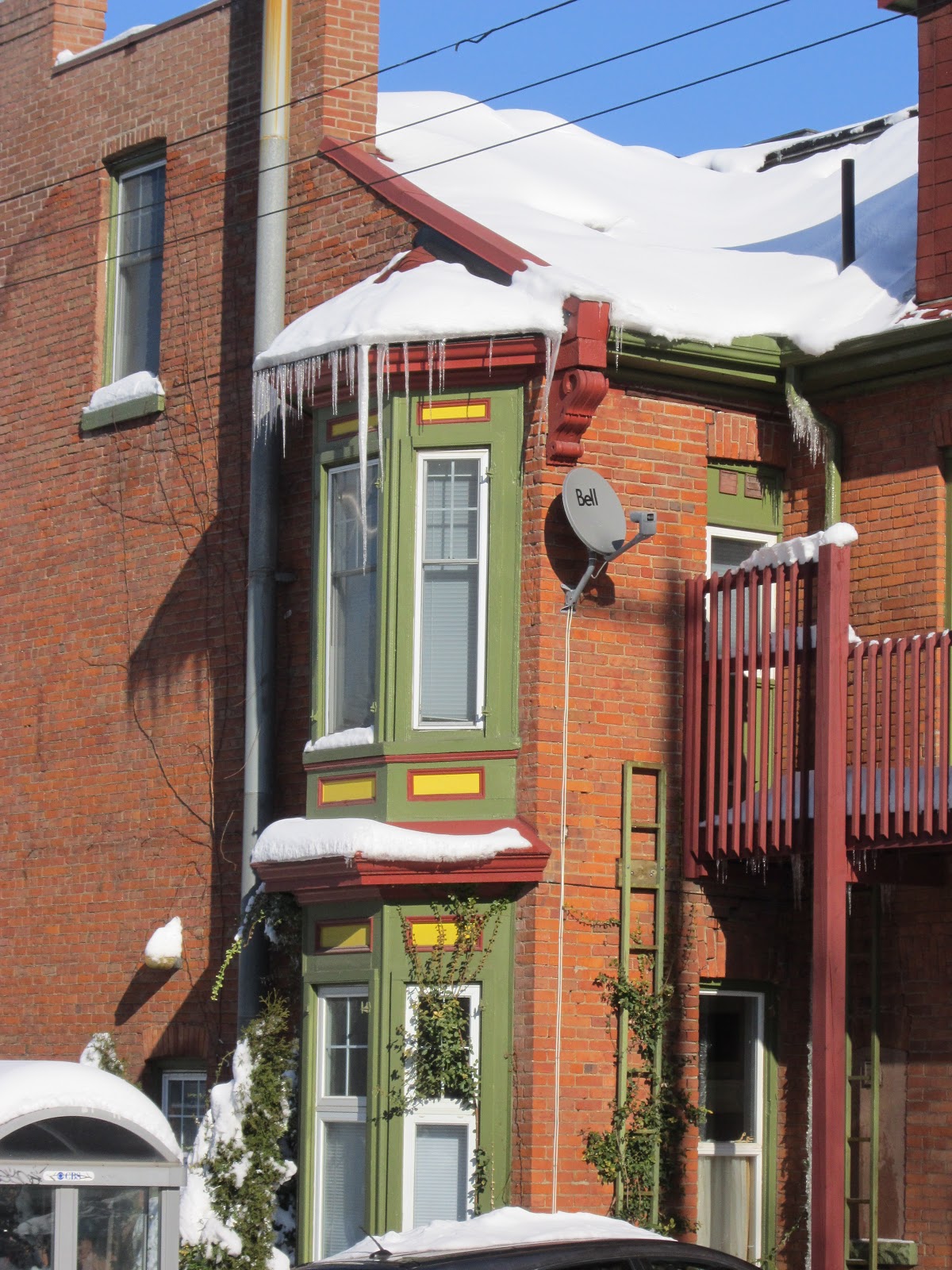 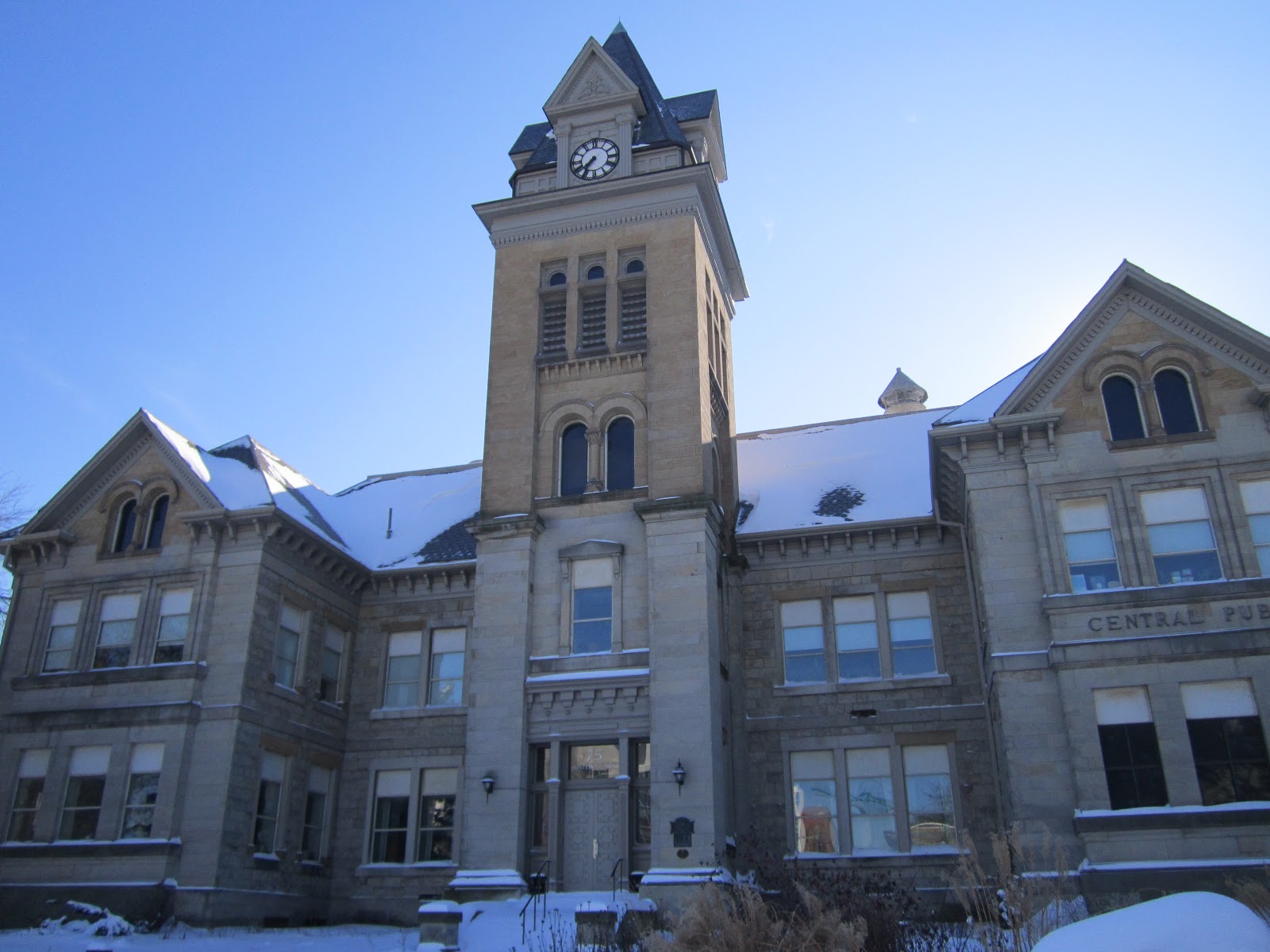 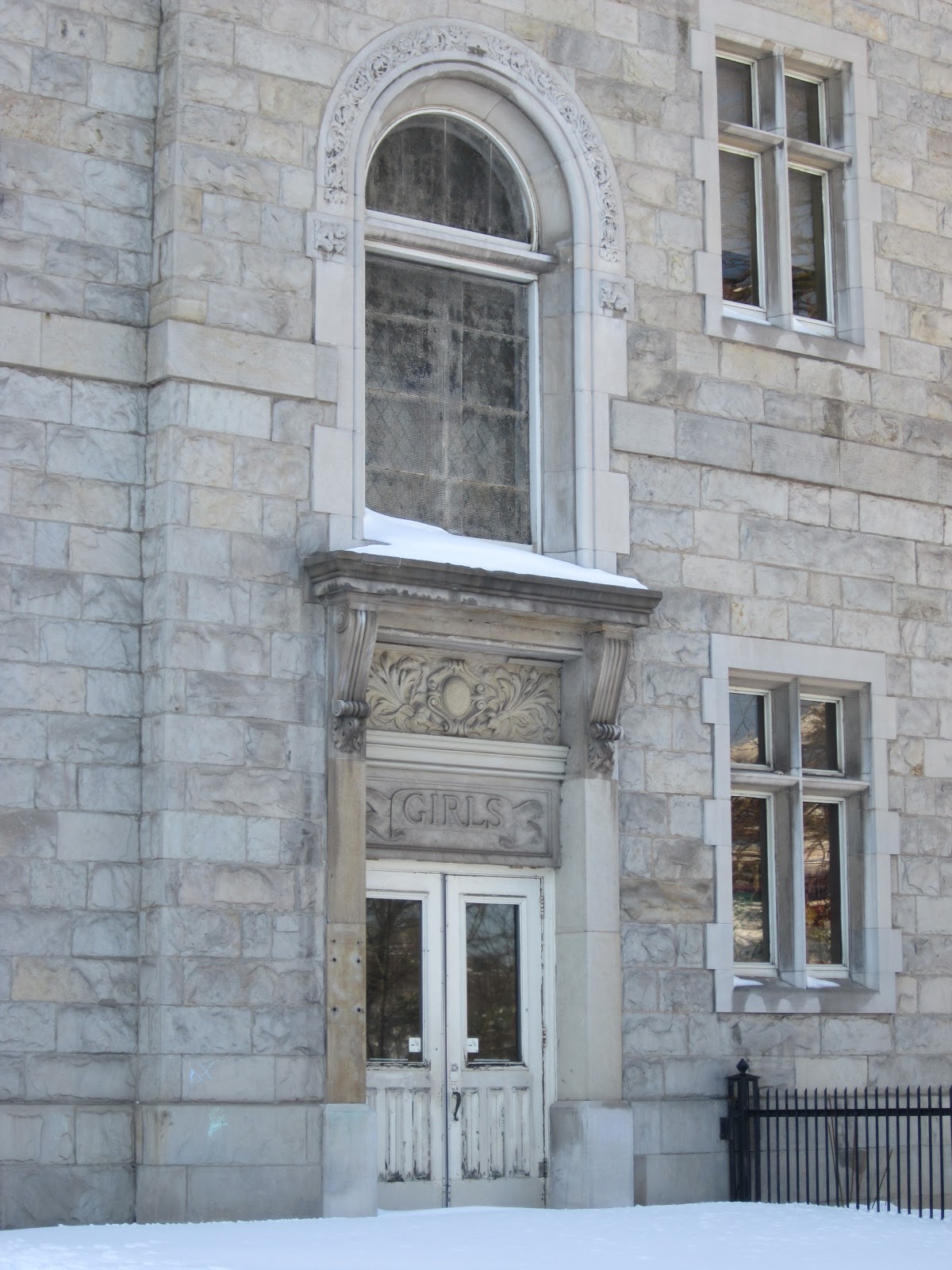 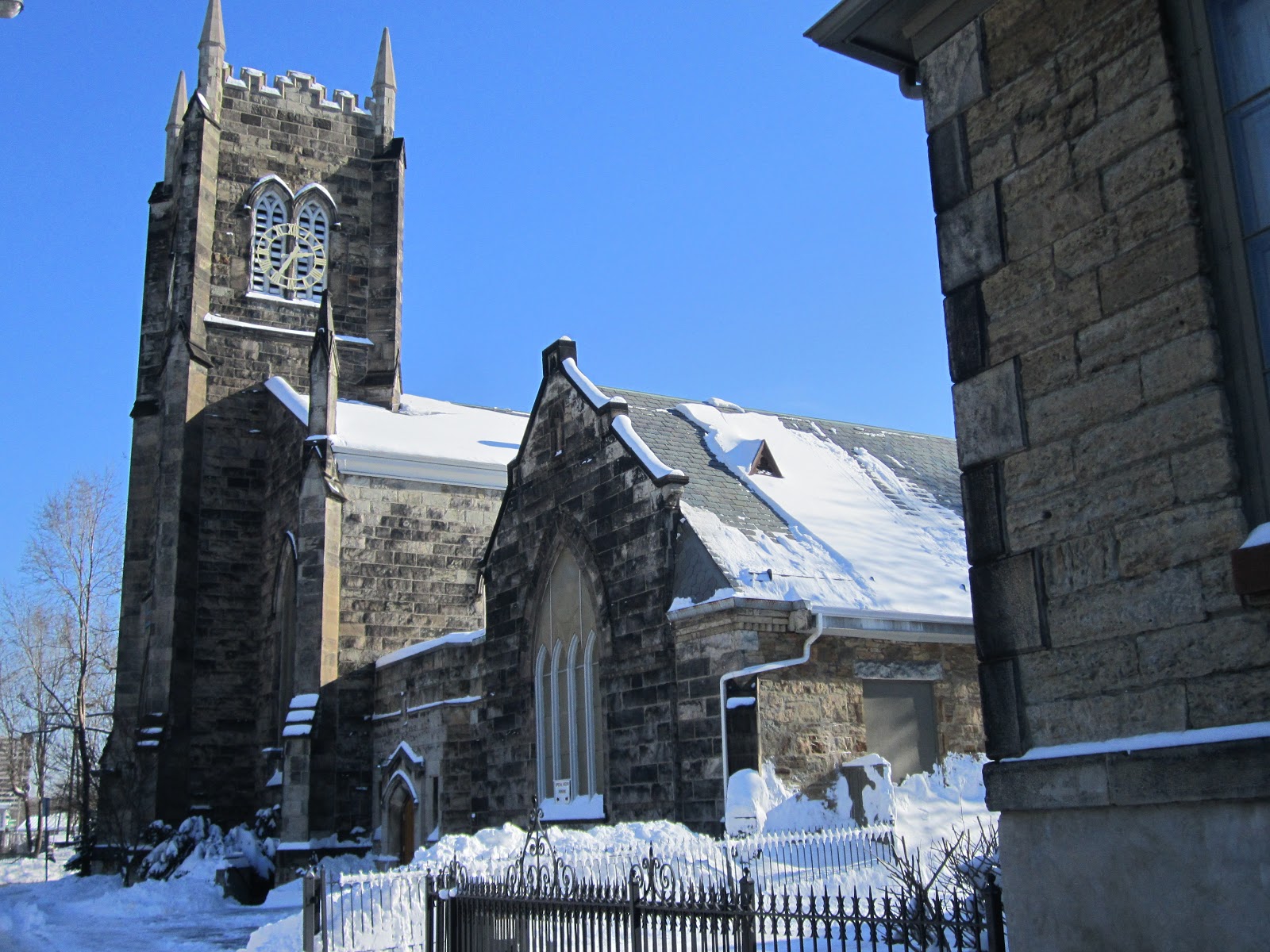 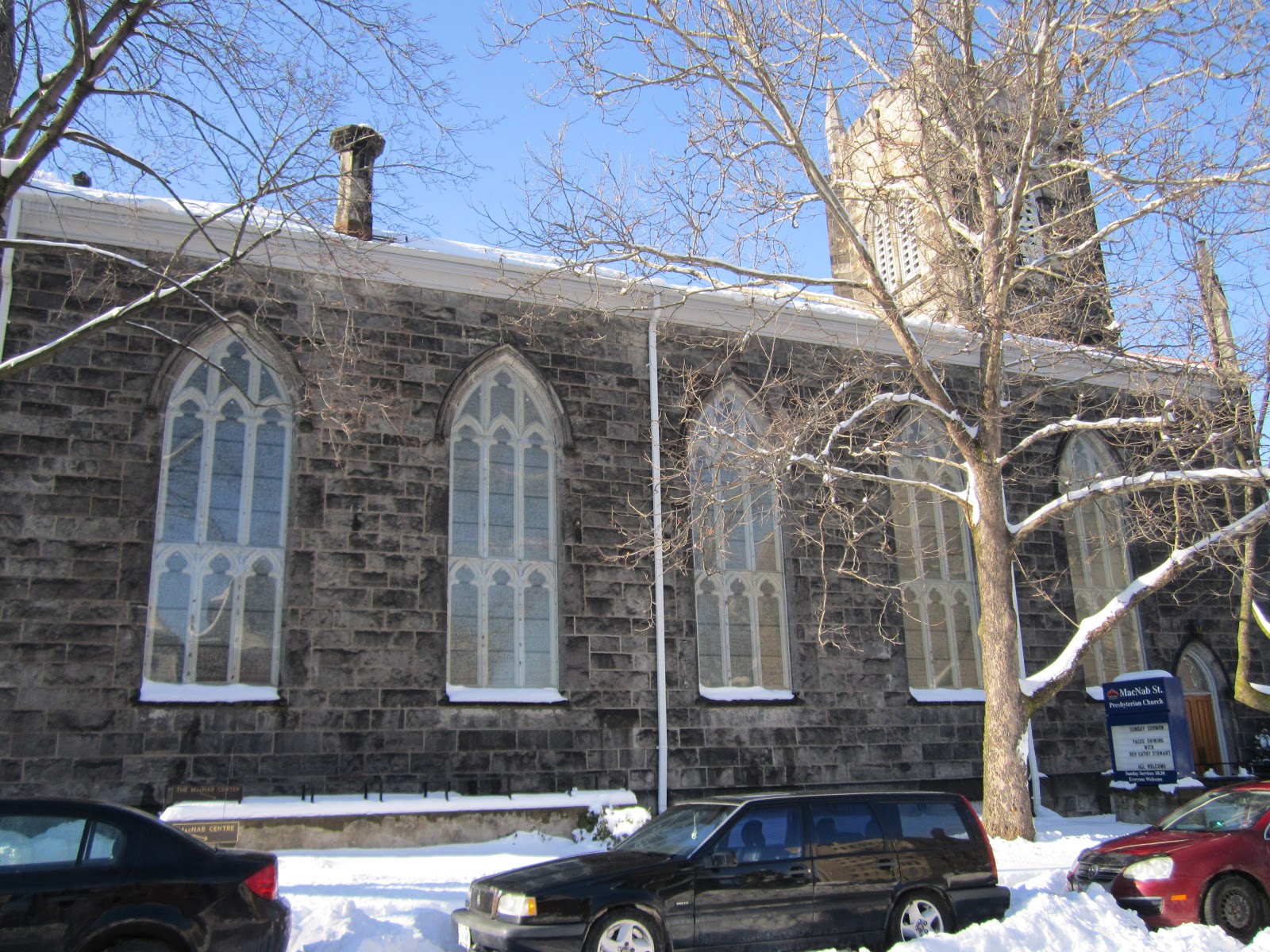 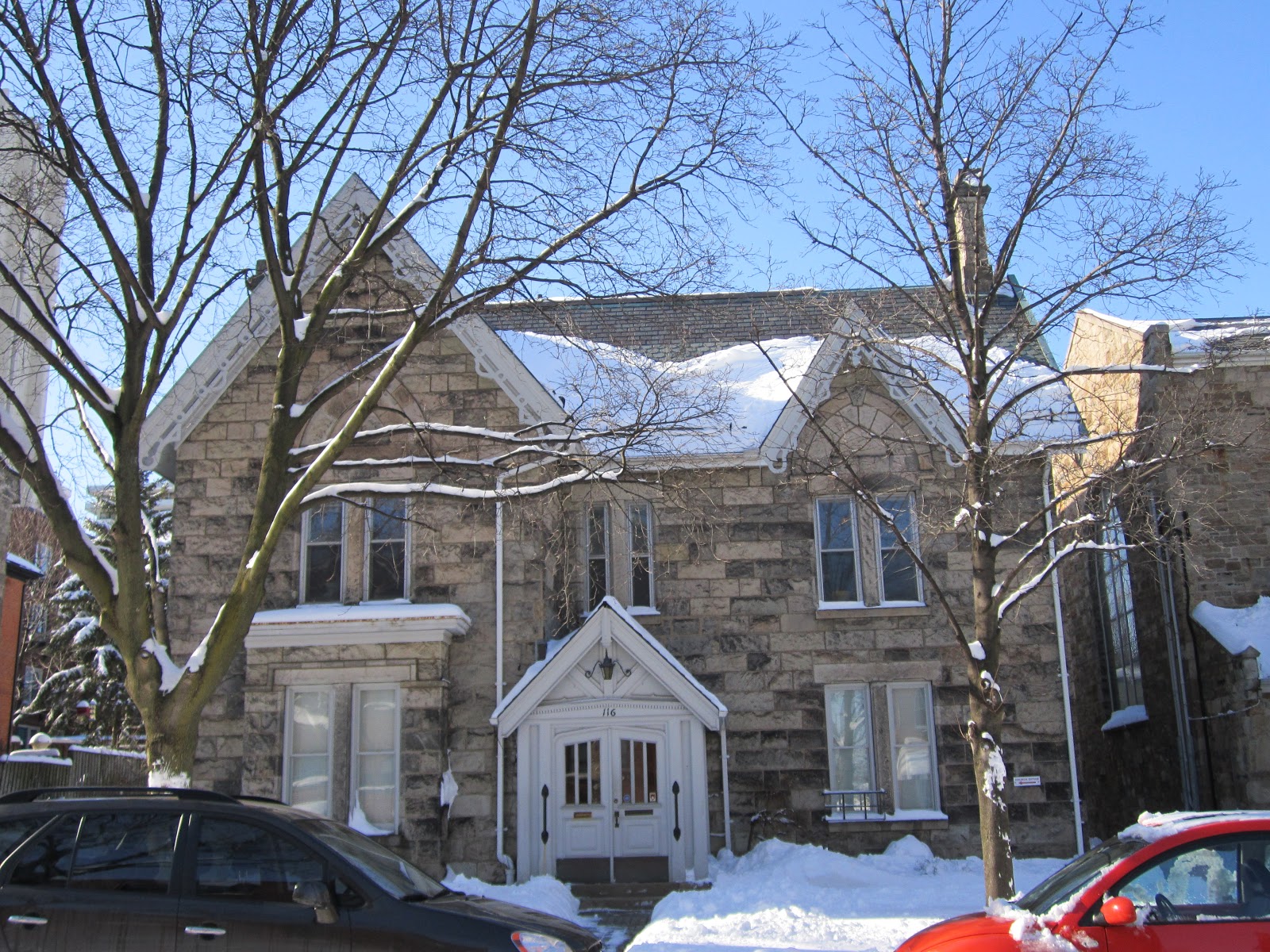 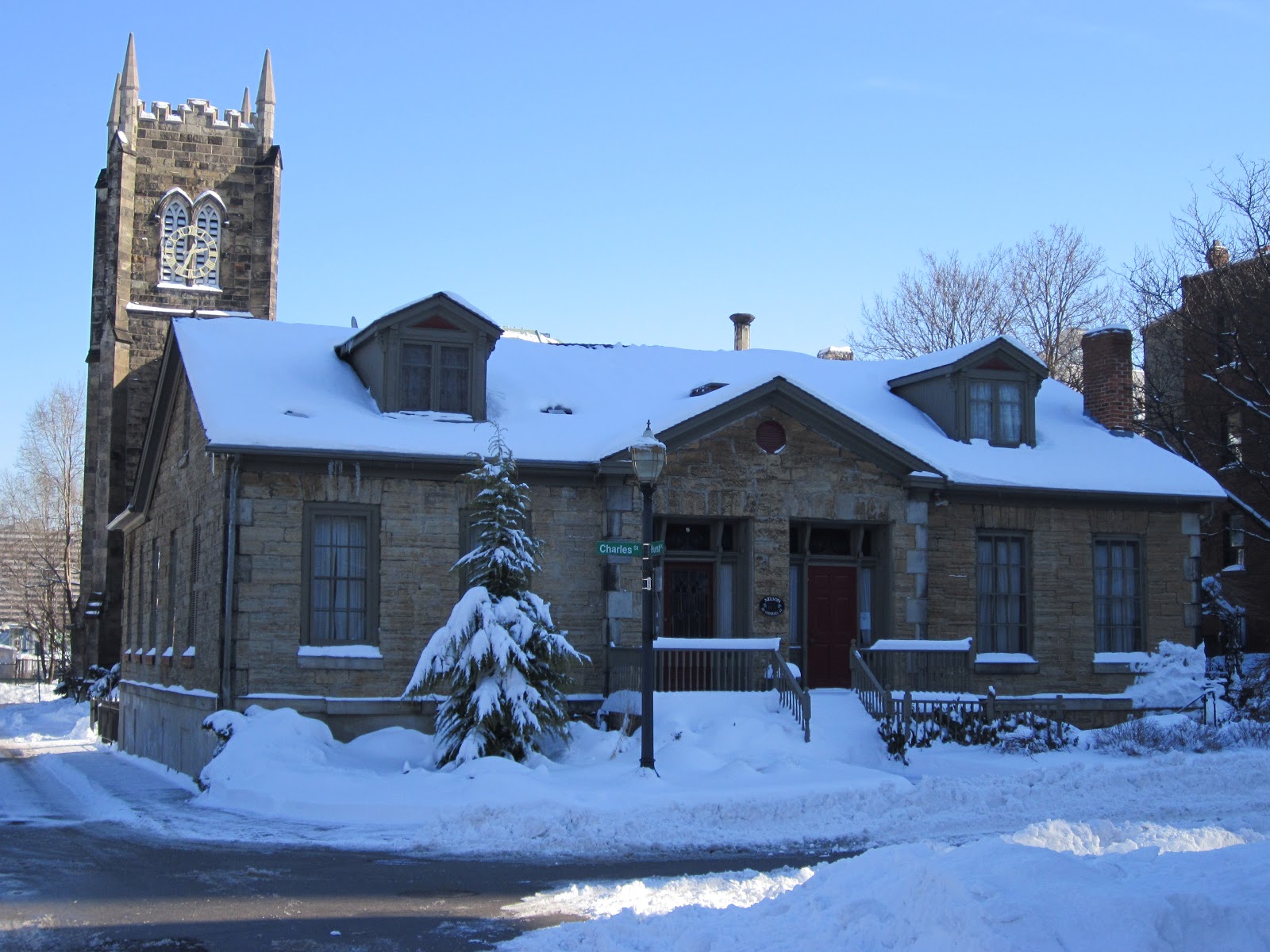 Whitehern-former home of the McQuesten Family. 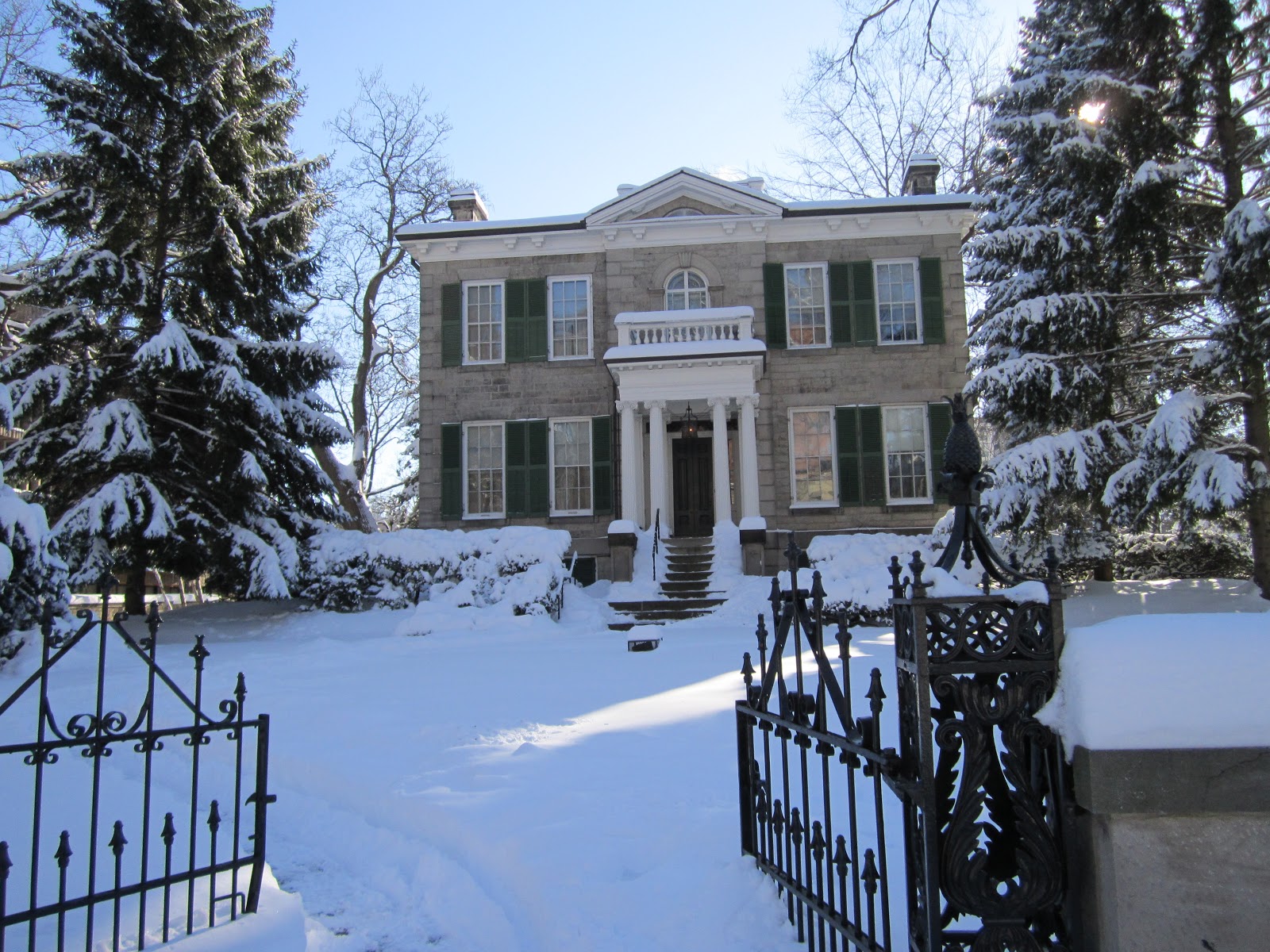 The gardens and house are open for tours.  Xmas time is a good season to go as the house is decorated in period style.  Whitehern hosts Easter egg hunts and Strawberry Socials in the garden.
St. Mark’s Anglican, now boarded up save for one window.  Council doesn’t know what to do with this but have several proposals in their Adaptive Reuse Study-conversion to three apartments, retail, or tearing it down.   The pigeons have found a home. I like the plans for the apartments.  Stained glass would be a nice feature in a condo. 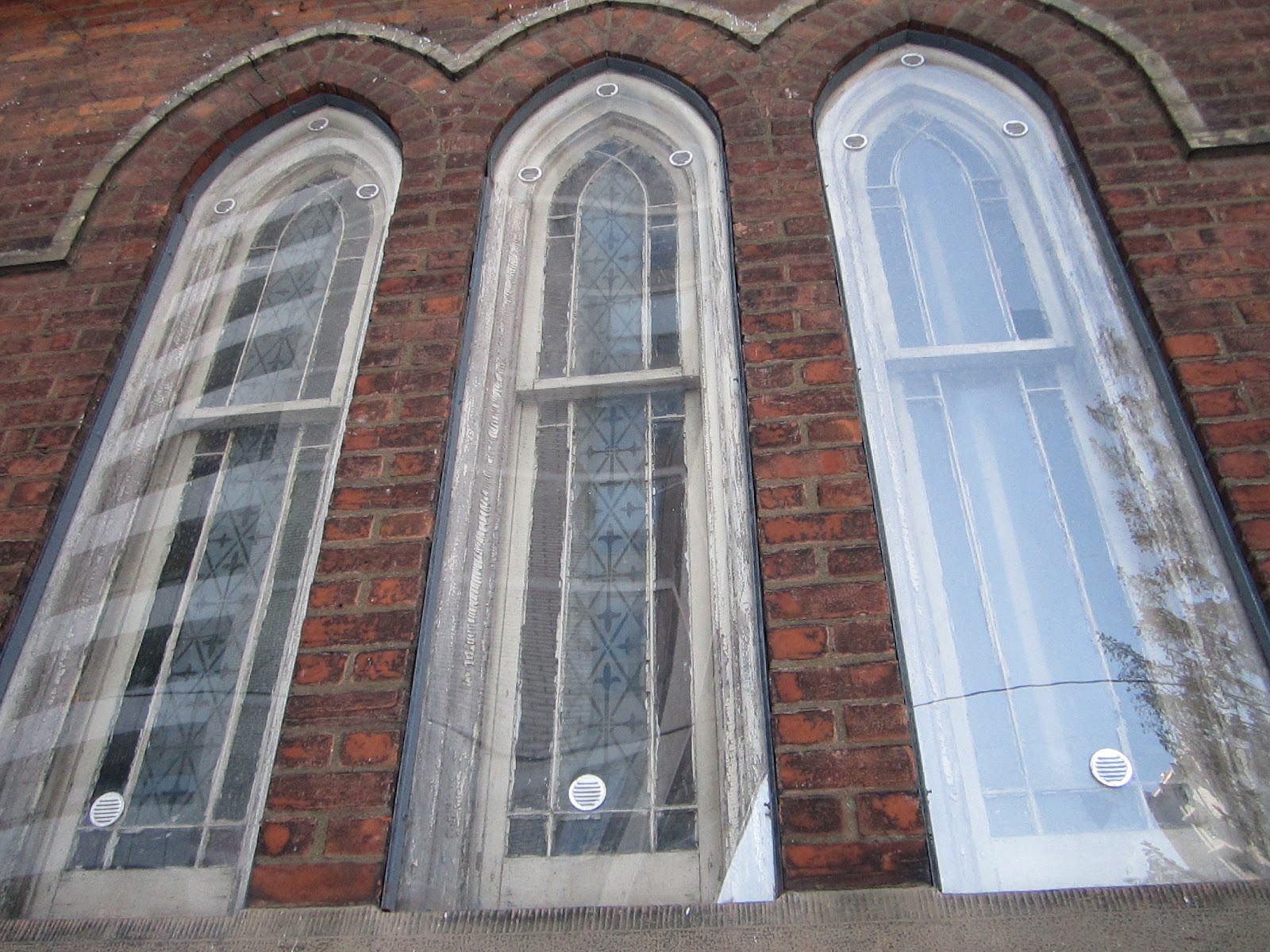 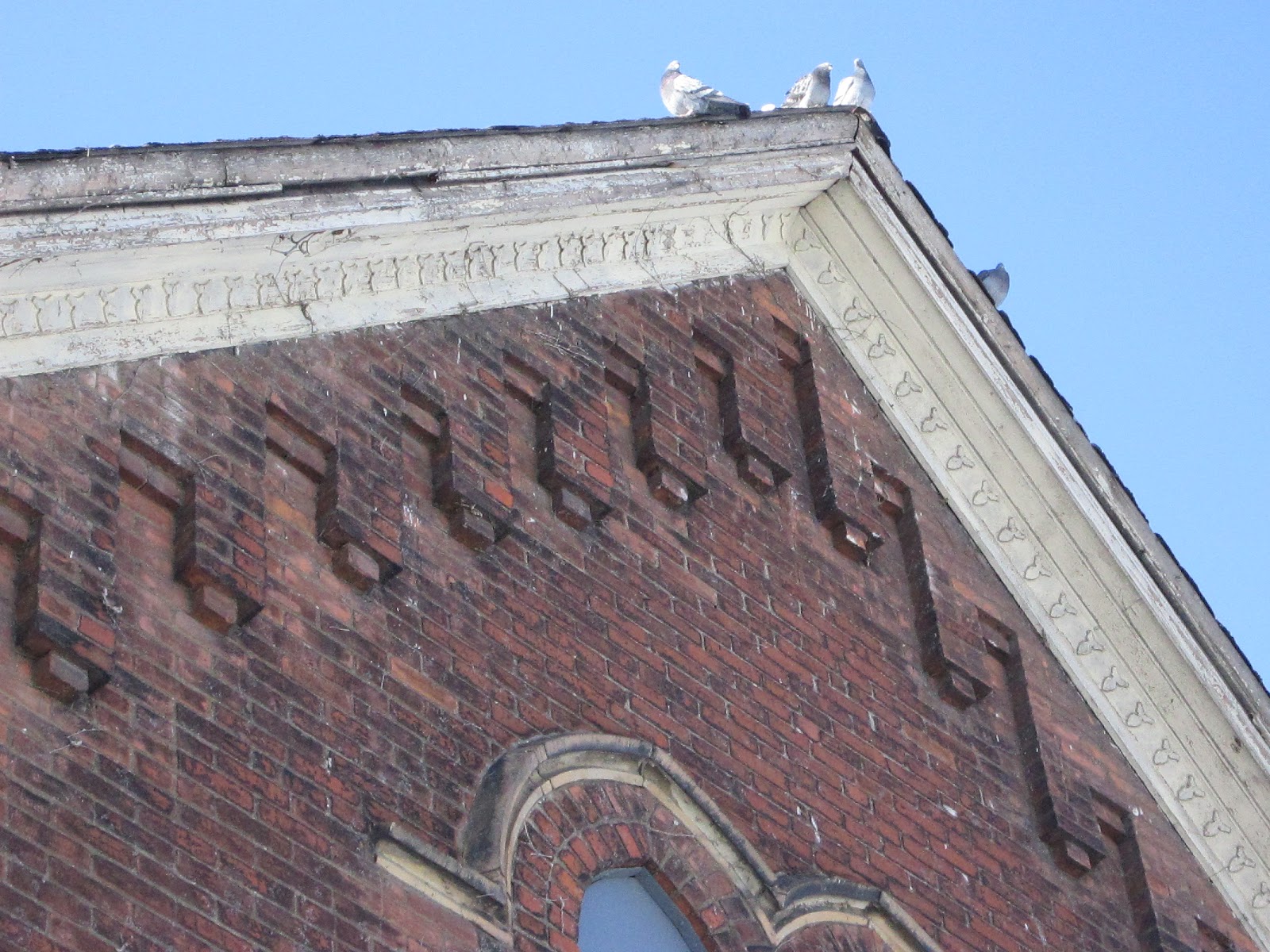 Behind the modern monstrosity below lies a hidden gem. 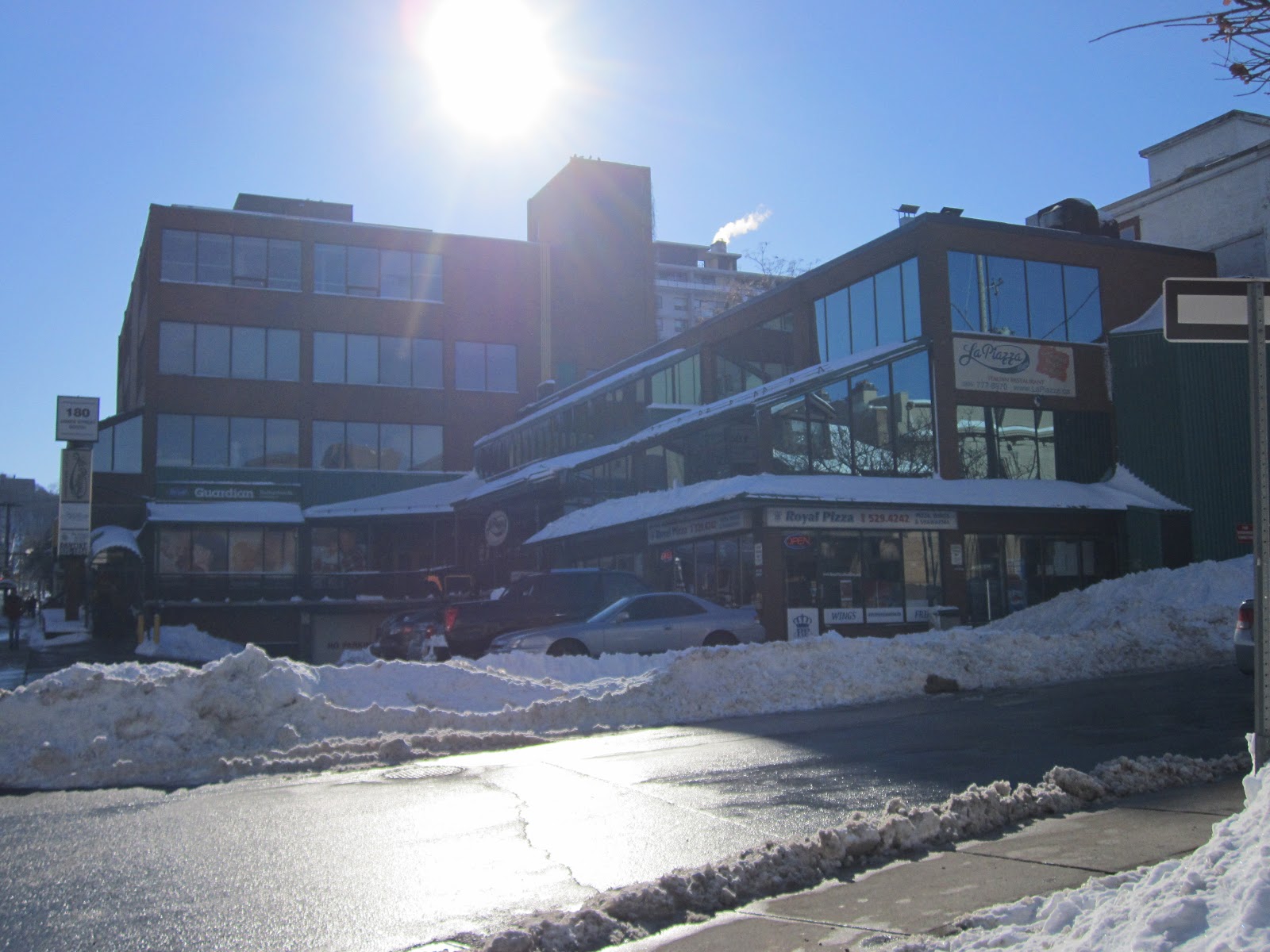 A former private estate built in the style of a Scottish Baronial Castle.  It has long been divided up into private apartments and the garden is now a parking lot.  Alas. 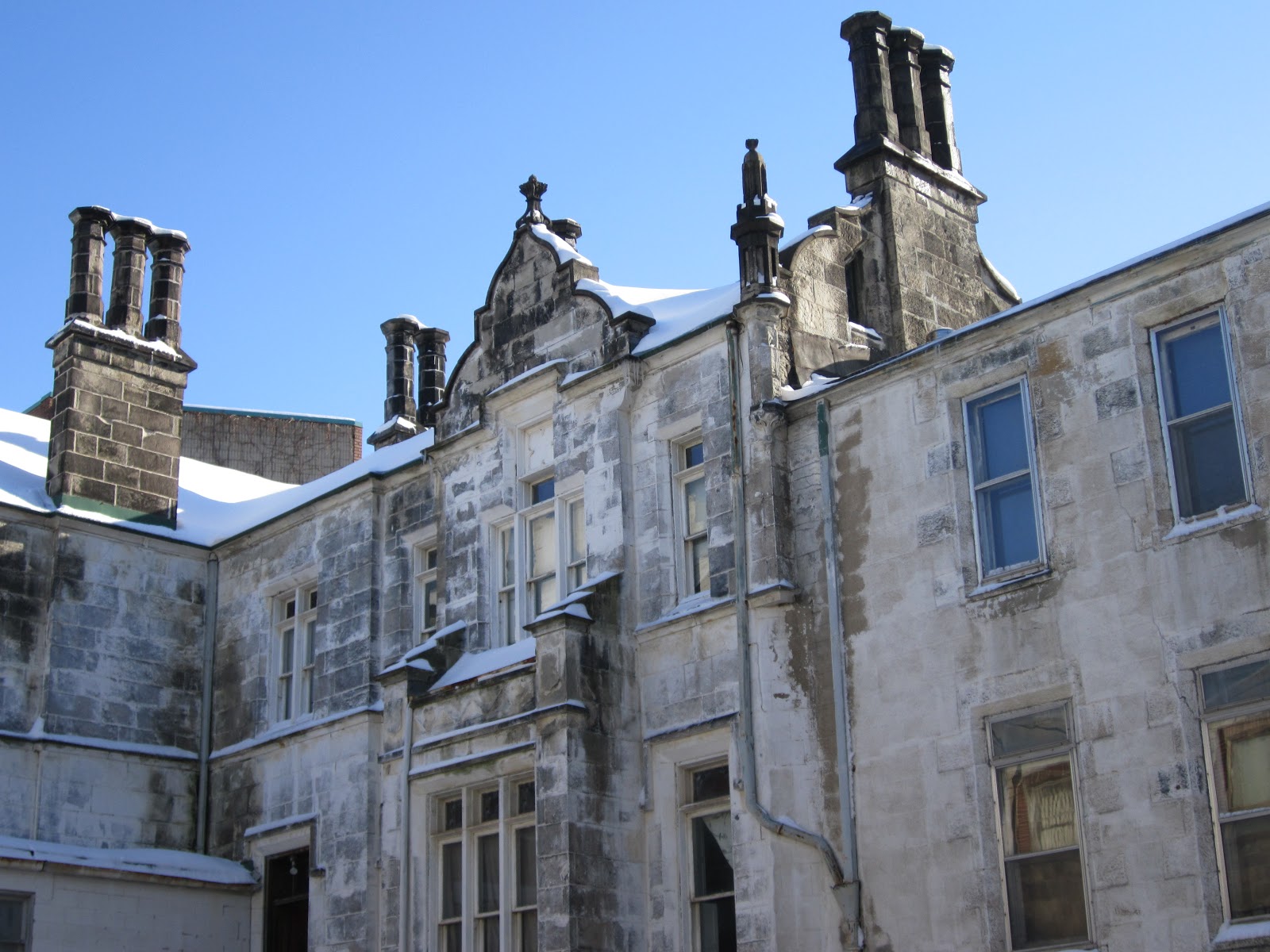 If you're going to duplex things, please try to retain the character of the place. 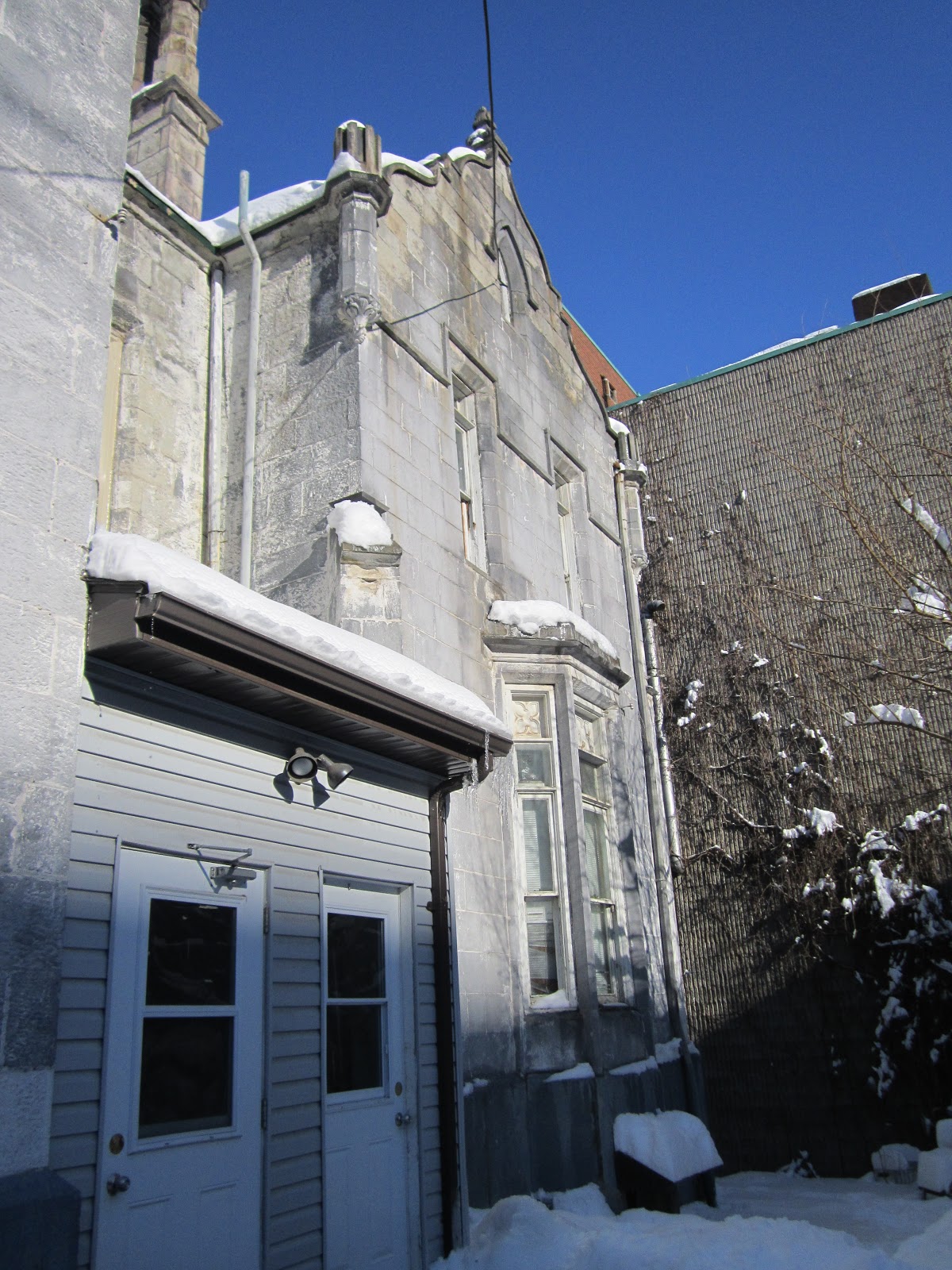 Clock was ticking and it was soon time for the much anticipated, inaugural pork tenderloin, courtesy of The Pater.  (But first, more digging out!)  After much moaning and complaining, dinner was declared a success.  Cocktail hour, soup, roast pork and sticky toffee pudding.  Excellent meal.
Sunday wind down with CBC.  Interview with Jeet Thayil.  He was filling in for Salman Rushdie at the Jaipur Festival as there was yet another price on Rushdie’s head and Wachtel conducted the interview under armed guard.  What we won’t do for our career.  Thayil spent twenty years as a heroin addict and has lived to tell the tale as an award winning writer.  Interesting piece.
Valentine’s Day approaching; what’s in the VCR?  Best Intentions-the story of Ingmar Bergman’s parents.   She was from a upper-middle class family; he a humble postman.  Very nicely done.  Also, The English Patient and Truly, Madly Deeply by Anthony Minghella.  Will have to put these into a Chestnut post.
Finished the day with the Glen Woodcock show on 91.1.  The Big Bands of Quincy Jones, Harry Connick Jr., Tony Bennet, Duke Ellington and so on.  Naturally, all programming is Valentine's Day themed.  Another thought for the day:  you don't have to wait for this one day to do something nice for your partner.  What of the other 364 days? 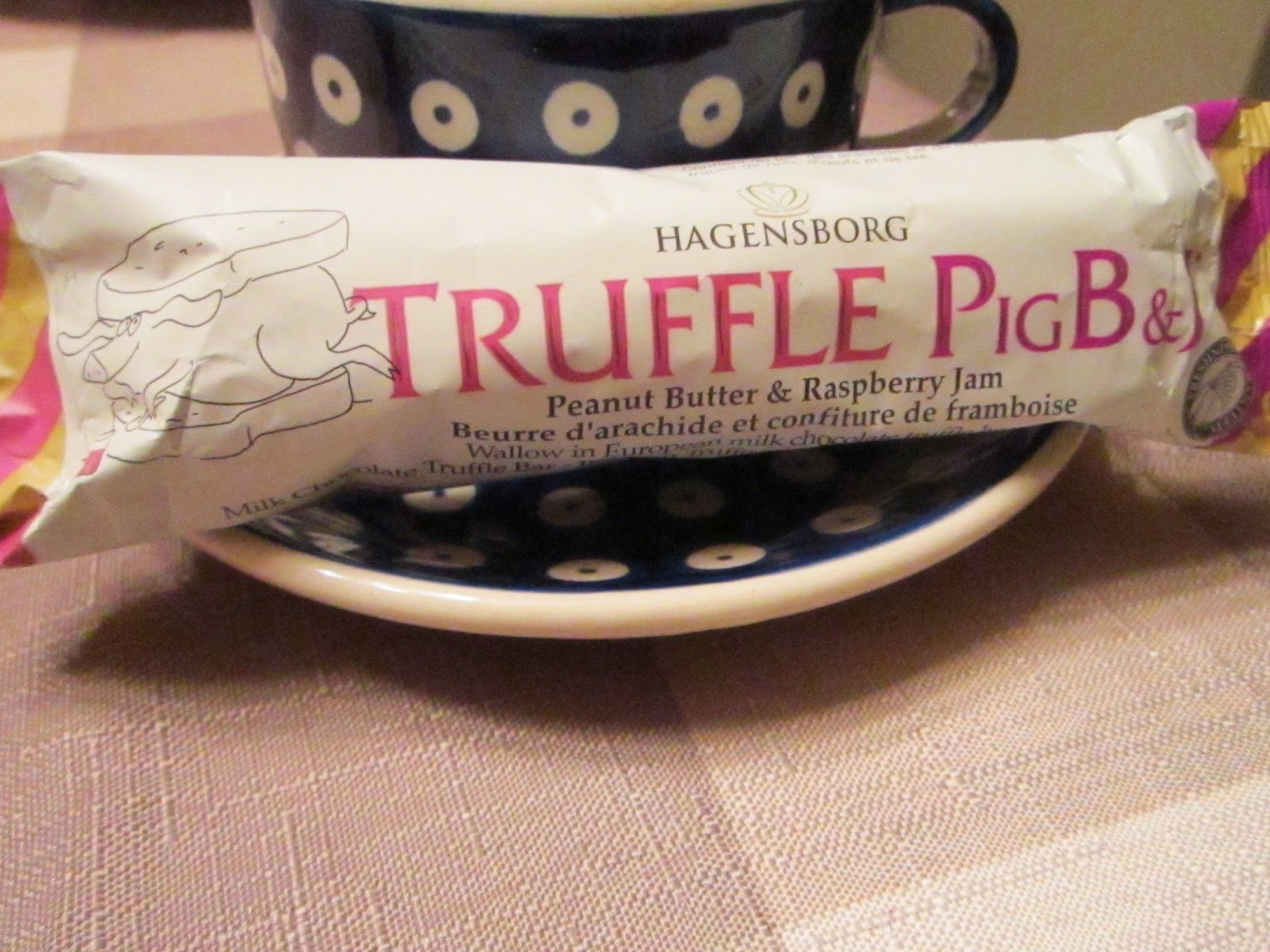 I'm recommending Truffle Pig by Hagenborg chocolates.  Made in Canada. Lots of flavours;  this one's P B & J.  I like the image of the pig nestled between two slices of bread inviting you to wallow in chocolate.  Try the bubble gum or mocha.