Rob Ford Watch was in full swing Friday. Kept an ear open to the morning show. Update came at 10:30   Ruling overturned. Alas. Cheaper than a by-election, I suppose. After the kerfuffle, settled into the afternoon with a little Bach. We do seem to take a lot of trouble pronouncing his name whereas we don't bother with anyone else.  Why is that? How many ways can you say Bach?

The only conversation was hockey so I amused myself with the bird that had landed in the tree.  I had been on the hunt for a pheasant and the usual sources no longer carried any kind of game bird.  In fact the young lad at the deli counter had no idea what I was talking about.  "A what?"  Then later, "What was it you called it again?"  Most amusing.  The plump bird in the tree may just have met my needs.  Cumbrae Meats to the rescue, though.  A fine butcher shop and we are fortunate to have one of their three locations right here in Hamilton.  It's unusual to go into raptures about a butcher shop but this one's rather nice.  Beautifully presented product; good quality.

A few cm's of snow fell Friday PM and surprisingly the traffic was moving.  It is customary to travel at top speeds of 60-70kmh when the flakes fall.  Easy to spot those without snow tyres.  Over to the other side of town to get the bird.  I behaved and didn't stop for cappuccino, chocolate dipped spun toffee nor Pad Thai.  However, Chef & Wife did have their mango shrimp on so picked up a portion for the fridge.  Shopping frenzy getting the rest of the menu. Some shelves bare and prices on the rise due to the arctic conditions south of the border.  Expecting a better Niagara Ice Wine harvest this year.

The more you can do towards dinner now the less the next day.  Simple philosophy.   Cafe de Paris prep began in earnest. Opportunity finally presented itself to take down the Xmas tree. I have had my detractors; keeping the tree up has been a bit of a hard sell.  I've enjoyed it.  Thought to tarp it, fully decorated, and drag it out to the shed until December. 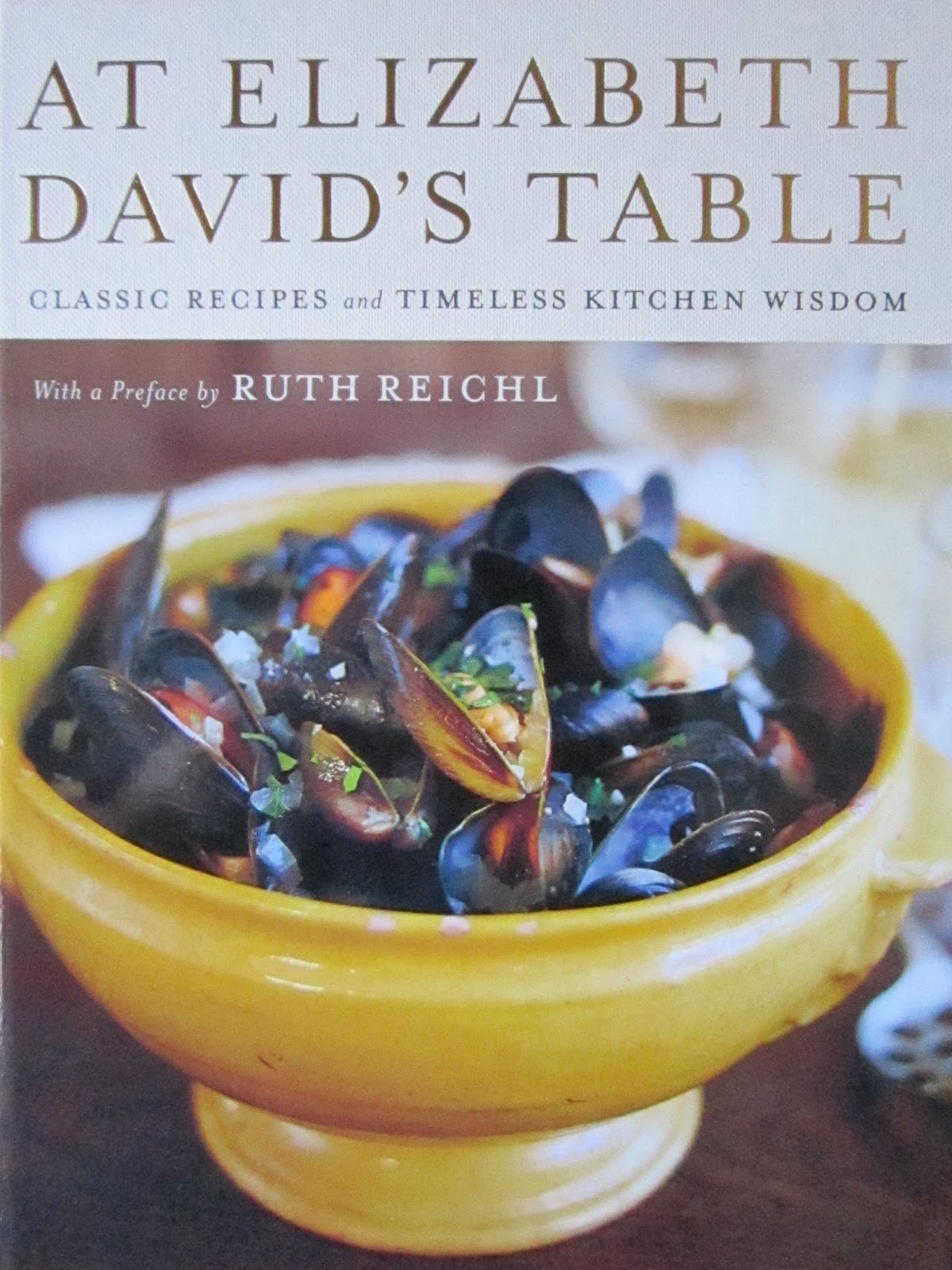 Mysteries of what appears to be complex cooking revealed.  No complexity to it at all.  Simple is good.  On this week's menu:﻿

Will be posting all the details a little later at:   CAFE DE PARIS

["And for the rest of them, we'll have a large trough of baked beans, garnished with a couple of dead dogs." John Cleese (Fawlty Towers)]

CBC's Ideas for Friday evening.  Artists in Residence at the Glenfiddich distillery in Scotland.  This particular episode focused on Jillian McDonald.  Every year the Distillery pays to have artists in residence and this is one of many that Ms. McDonald  has received.  Her previous projects include a Billy Bob Thornton  which defies description here but I will include the link to do it better justice Valley of the Deer   One distillery past project includes a special batch of single malt that will be aging, I believe, 100 years.  The project is a sort of treasure hunt to actually find where this special batch is hidden.  And even with all this talk of single malt, I failed to raise a glass to Robbie Burns. Tsk. Tsk.

Felt somewhat obligated to pay attention to Canadian politics again with the pending Premiership vote Saturday.  How long did this take?  An agonizing length of time.  So far so good on not focusing on Wynne's sexual orientation.  Think she entertained one question on the subject.

Set off Sunday to clear the gremlin behind the eyes.  Thought to finish the trail but first meandered through farm country. A little overcast and cold.  Found Edwards Cemetery dating from 1853.  It's surrounded by nothing but fields for miles.  Desolation and silence.  Reminded me of the Carol Shields novel Swann.  Things going on in farmhouses and nobody on the outside knows because of the isolation. 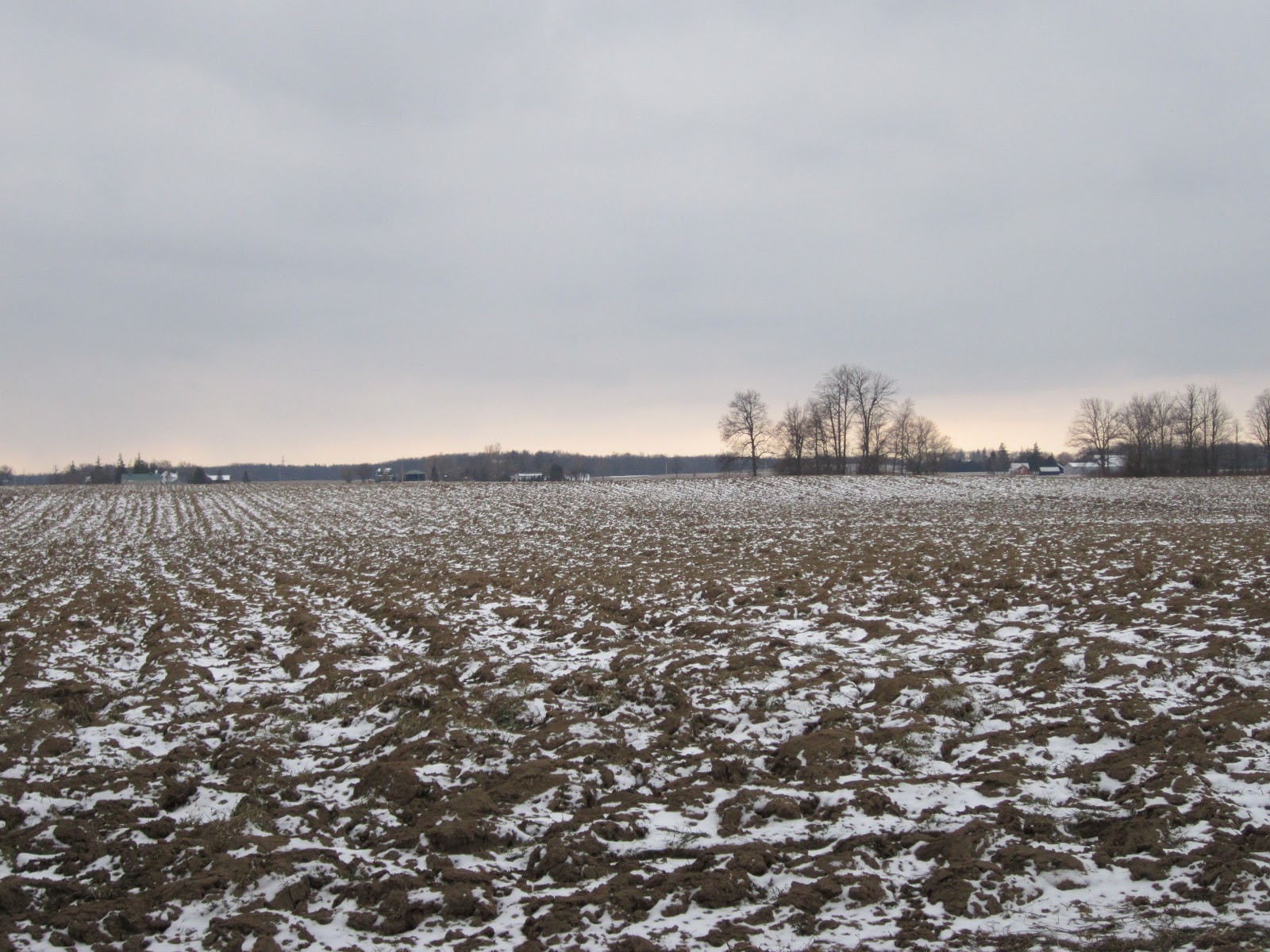 Sinking headstones; a few crumbling ones. A young boy over in the far corner. 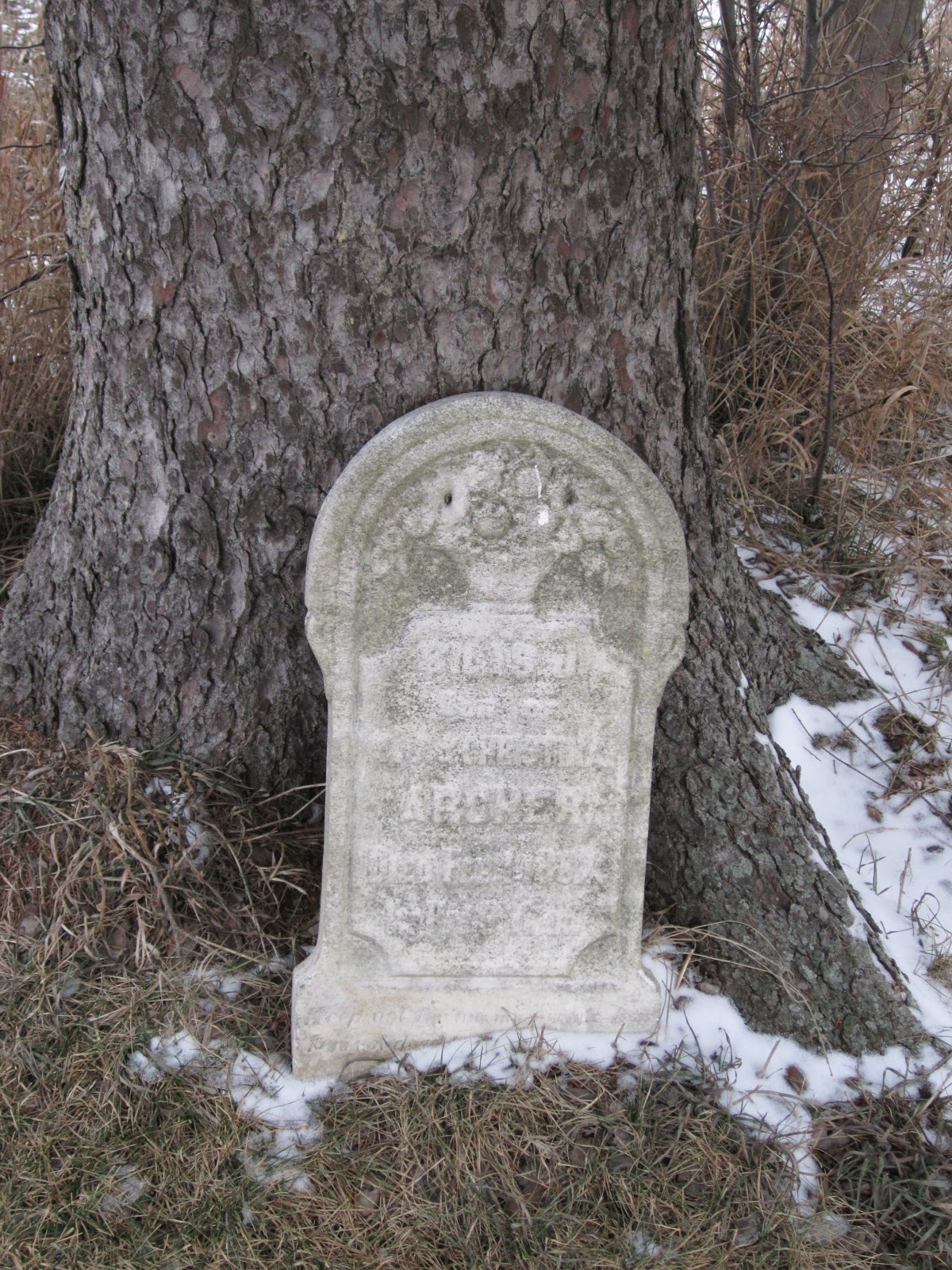 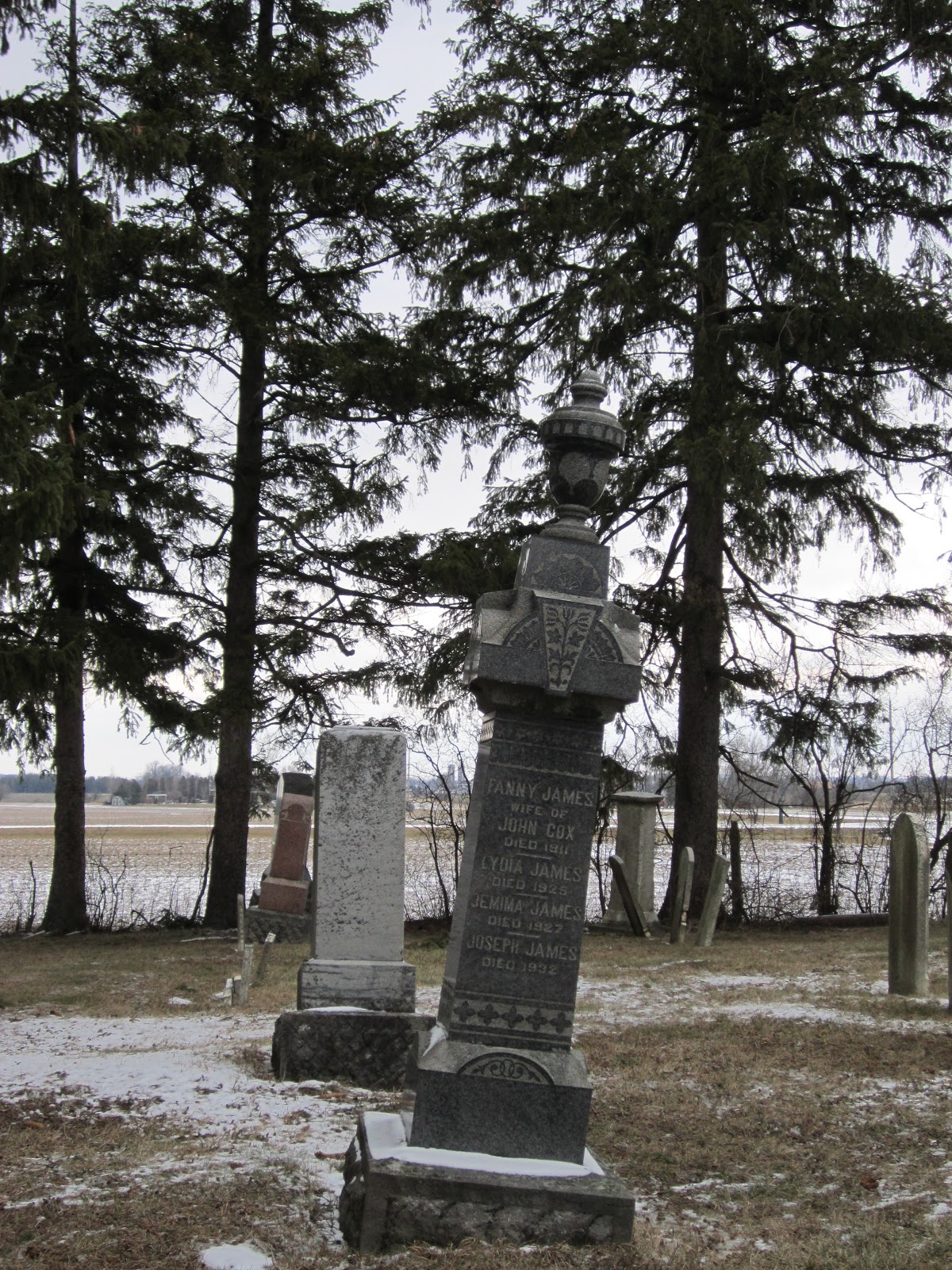 Silence until a little man on a bicycle came along the road collecting tin cans.  Thought it was a kid on a skateboard-it had that sound.  The collector was in fact crushing the cans.  Seemed like an awful lot of cans in the ditches. Cold!  Didn't feel a hike was going to happen.  Off to Haldimand through Blackheath.  Doubled back on Chippewa to Tyneside then #65. 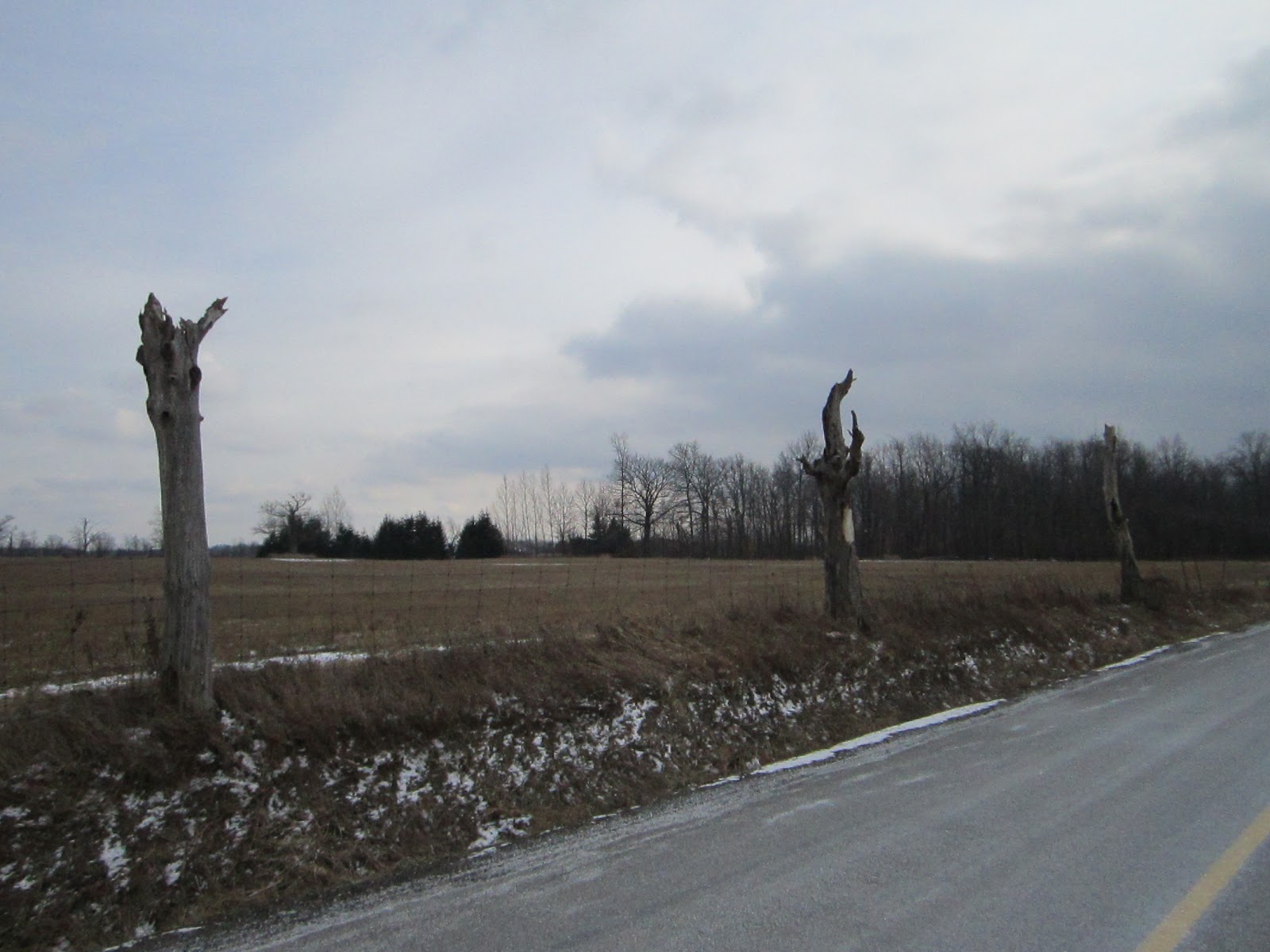 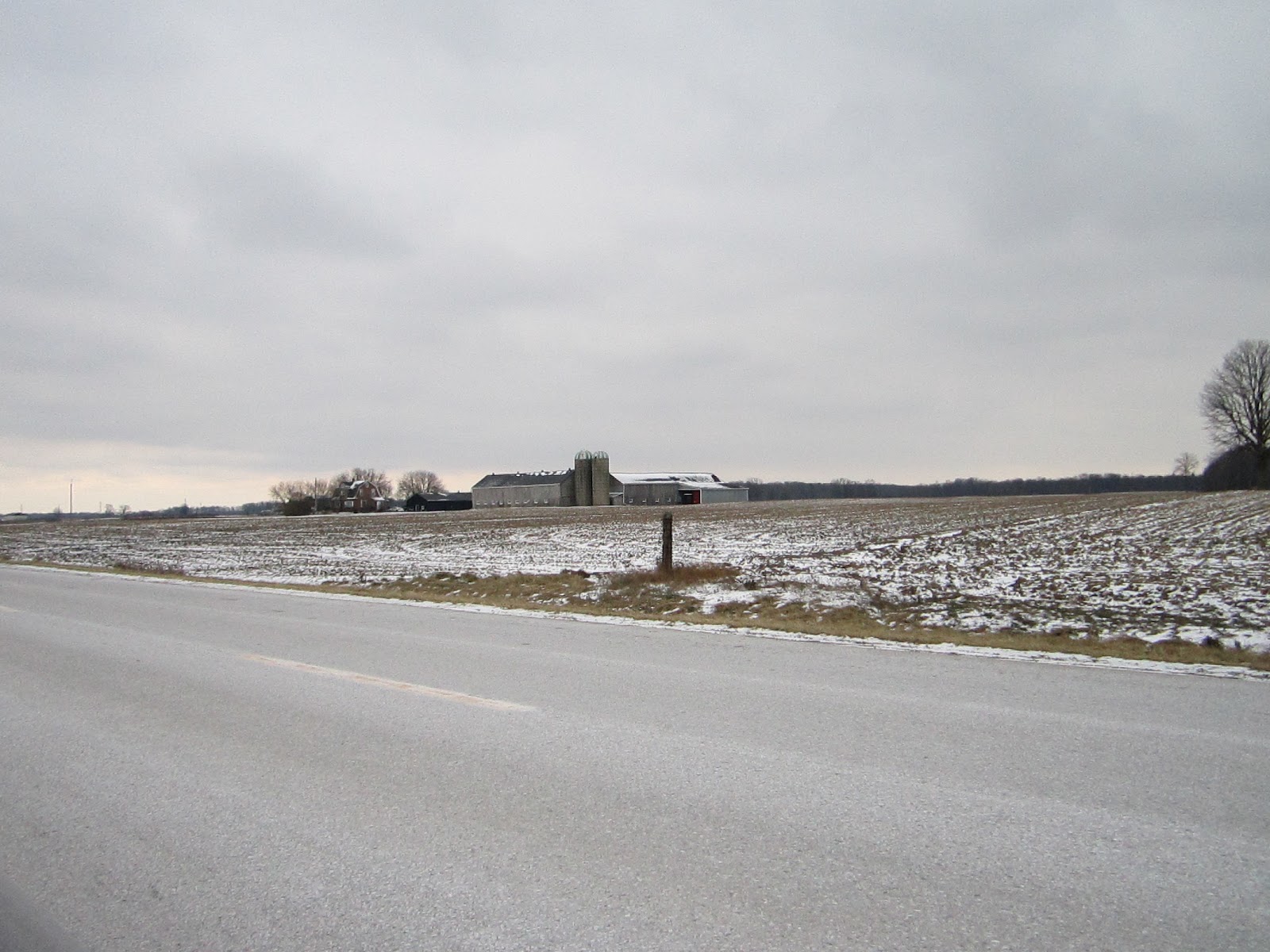 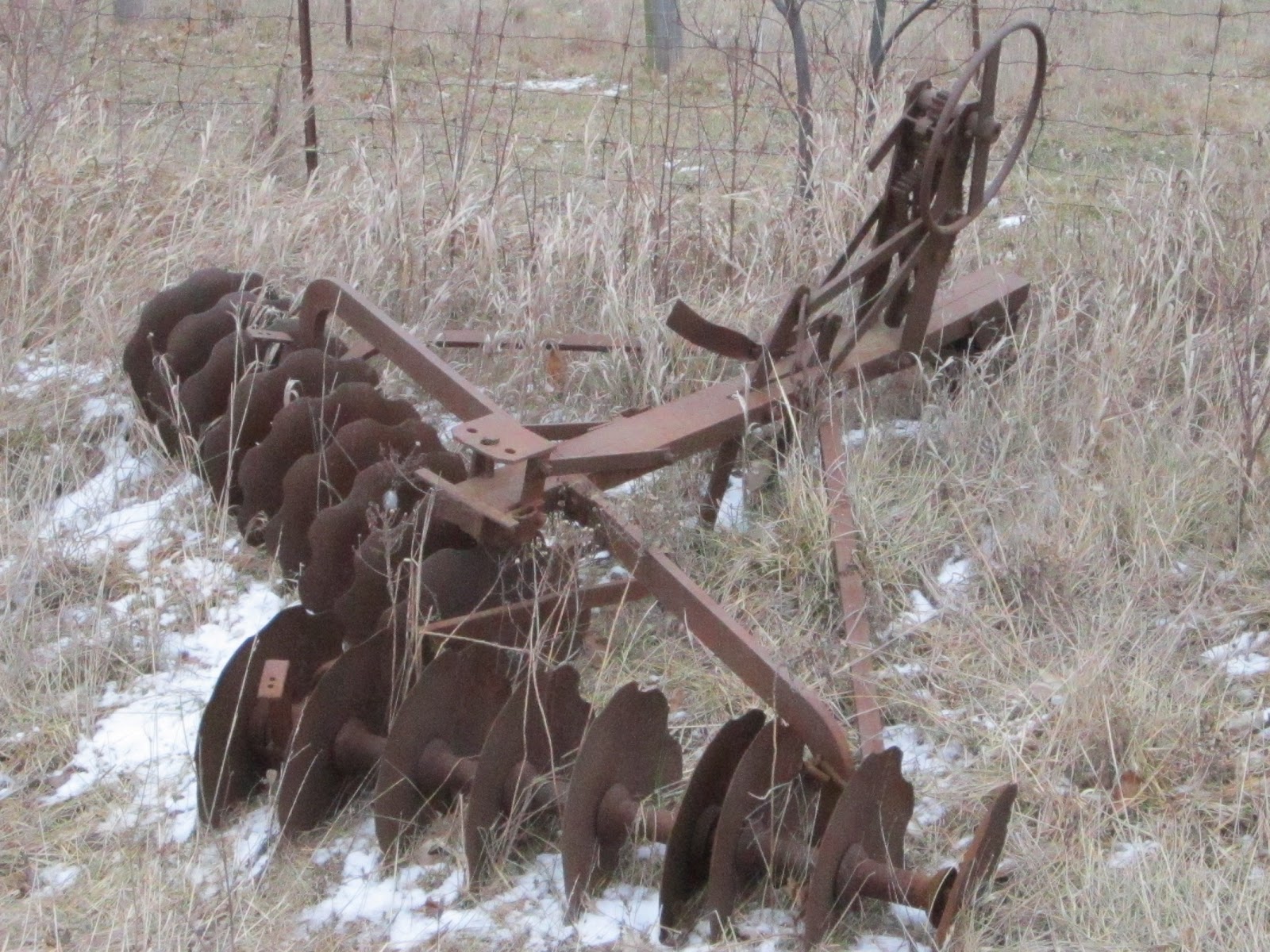 Pleasantly surprised to find work continuing on the Unity Road portion of the Chippewa Trail.  The gate was closed and not one, not two, but three earth movers sat idle on the path for the weekend.  Old railway ties were piled up ready for removal. 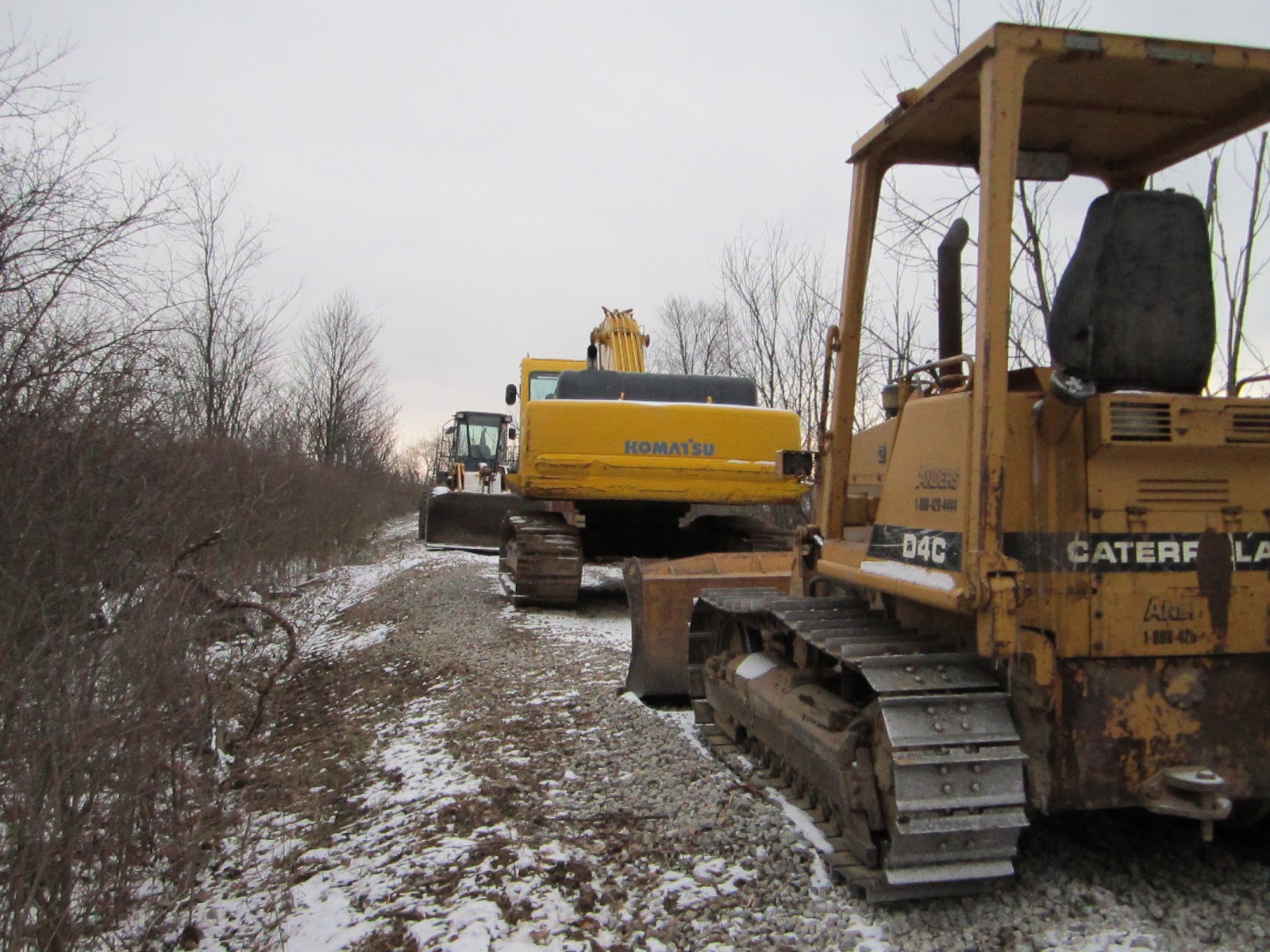 Over to Haldibrook Rd.  The pile of asphalt I mentioned last time has disappeared.  The site looks much better.  Passed by the other side of the Killman Zoo.  The alpacas were feeding; they looked rather comfortable in their coats. 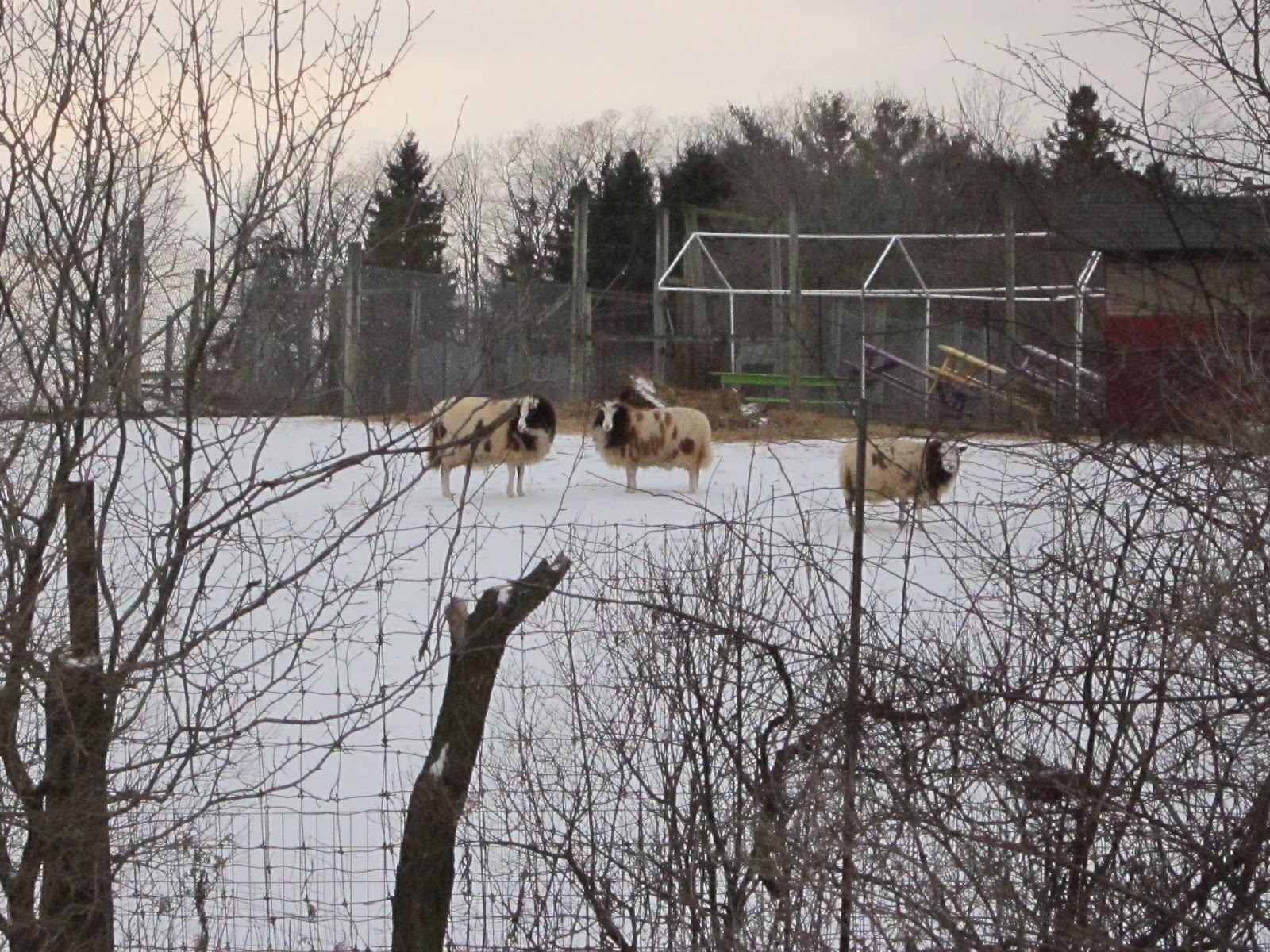 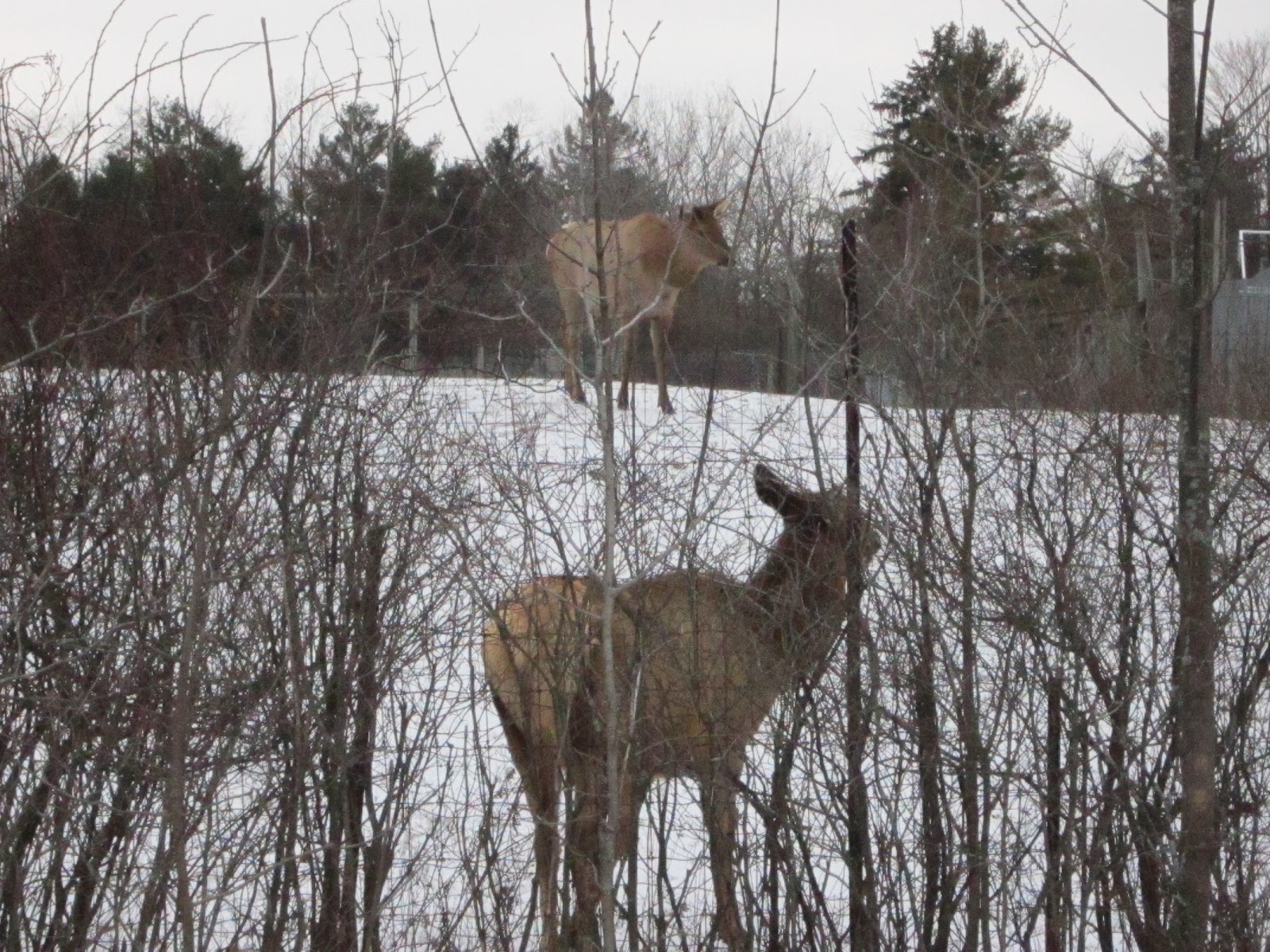 Skaters and hockey players out on the Binbrook ponds.
﻿ 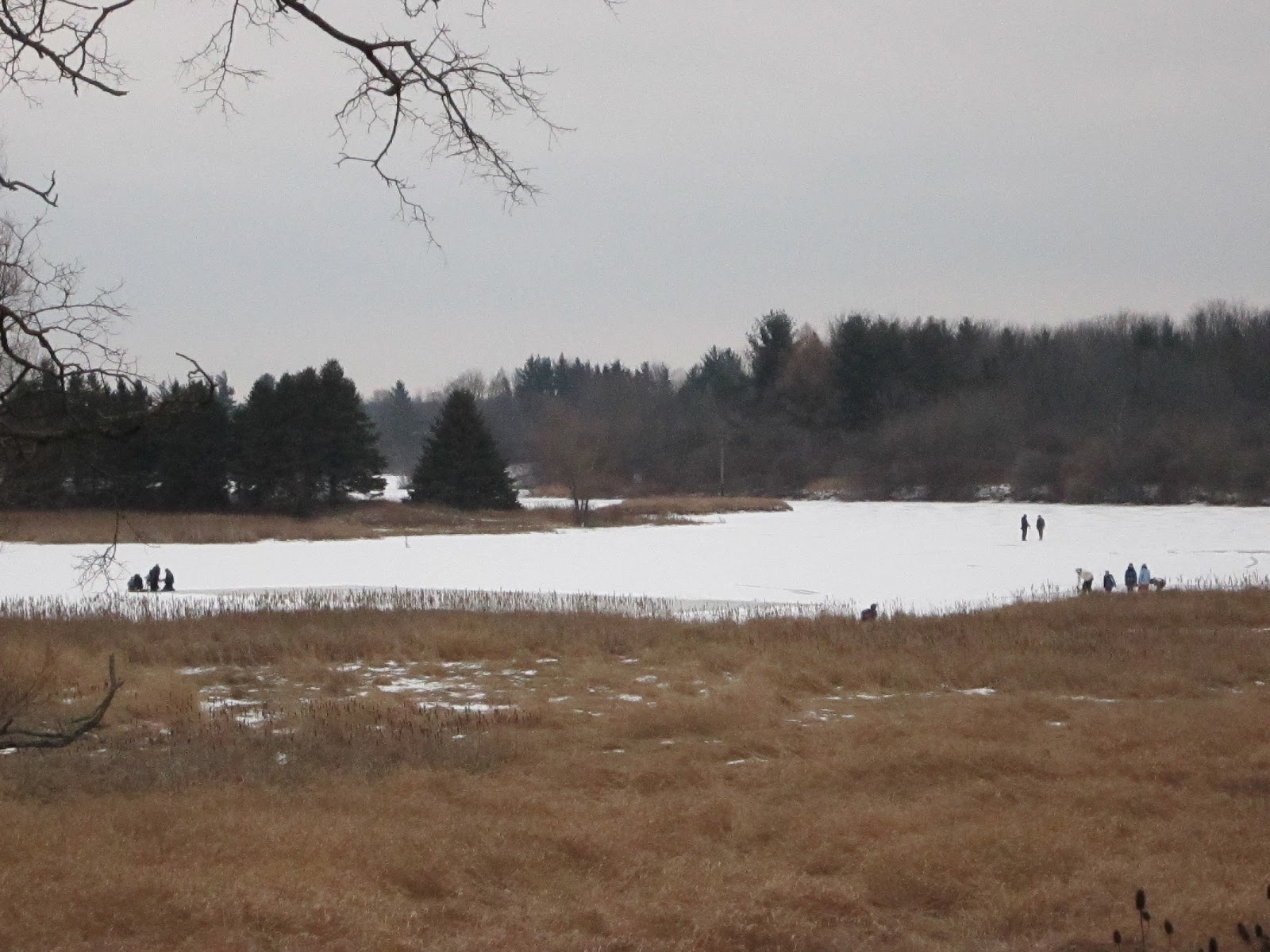 This is a curious house that I often drive by.  Like its shape and the Widow's Walk. 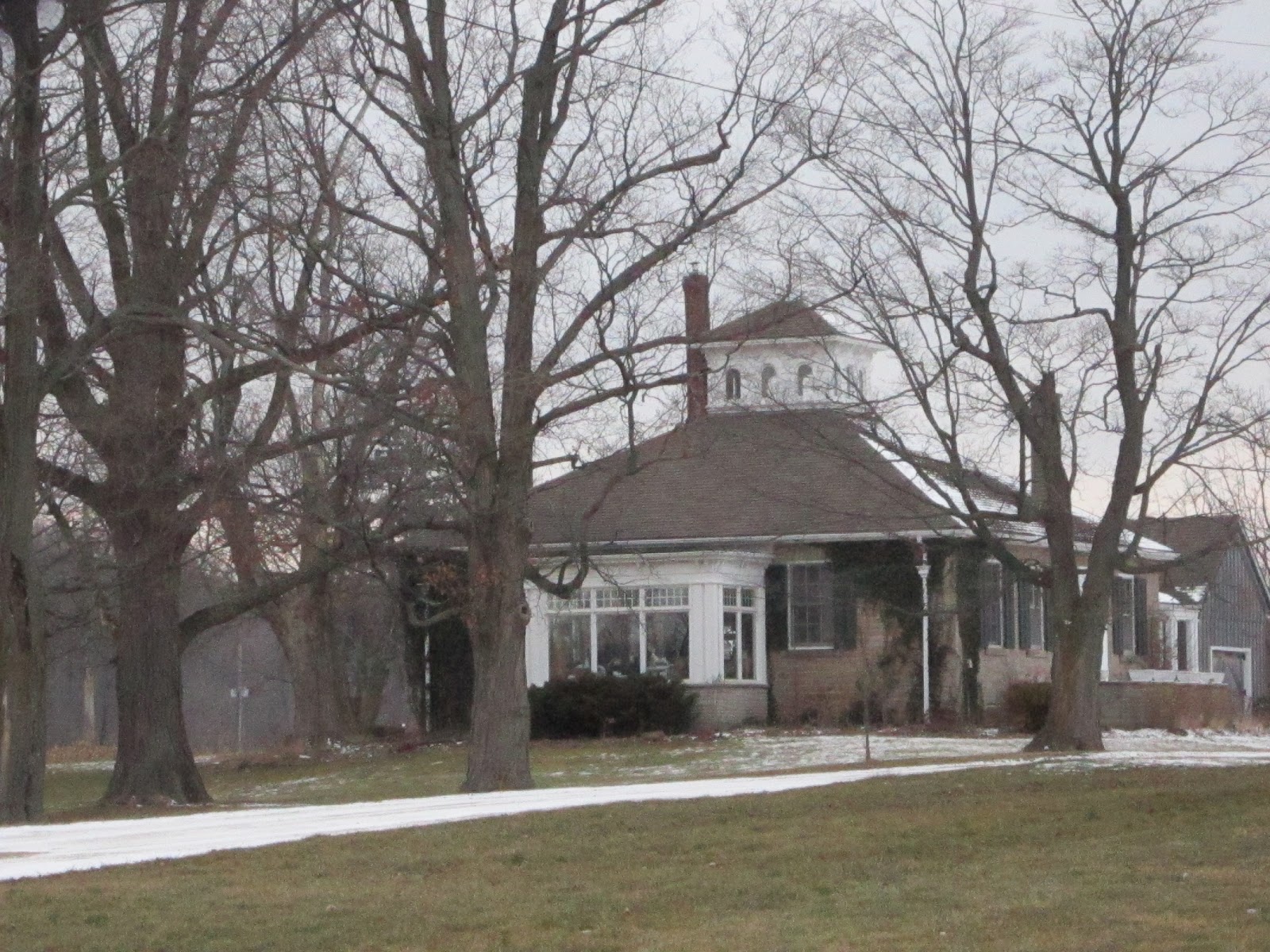 Home to defrost.  Got an update on the Cheez Whiz shipment to Silver Screen Suppers . Jars arrived intact and a successful casserole was prepared; recipe provided by Mr. Francis of Caker Cooking  Well done,  everyone.
Finished up the day with the first part of Bennet's Smut. Bennet is partial to pheasant, too.