“Oh, so you’re going to Toronto?”  No, the Ballet comes to Hamiltonians, we do not have to go to it.

Five people in class Saturday morning. The numbers are waning and I see there is no Winter class scheduled as a result. Teen Zumba has replaced it. For those who declined to grace the class with their presence, you missed a fantastic workout. We had a one time replacement instructor and she was good. Very good. The lactic acid built up earlier than usual and at one point I felt I may have to abandon ship. Everyone walked away with the equivalent of a runner’s high.

Off to town to get the tickets. Yes, years after talking about Swan Lake, tickets were finally purchased. Ballet Jorgen were in town this past weekend. There are those who believe ballet is dead, but Jorgen celebrates its 25th anniversary this year. Jorgen believe in dance for the masses and set out to prove that it’s not an elitist event.

Haven’t walked around town for ages. Delighted to find free parking a stone’s throw away. Three hours worth.  Lots of people getting tickets to William Shatner. Not sure what kind of performance he’s giving. Heard Leonard Nimoy on the radio this week. What was I listening to?  Nimoy was in fine voice-a cult classic. Off to the market which just celebrated 175 years.  Man playing bongos outside one of the exit doors.  He was wearing the most enormous white rimmed sunglasses.

Haven’t been to the market or library since the renovations. Big controversy over stall space and size. It did seem smaller than the old market. More eclectic, though, and very busy.  What is the difference between Ontario leeks at $2 versus $3? I couldn't tell the difference.  The Charging Horsemen clock has been fully restored and can now be found in the market. Looks great.

Not one but two Indian pastry stalls. Stopped at Sensational Samosa.   Realized I hadn’t drunk anything after the workout and so it was probably a good time to stop and rehydrate. The library was equally packed. Both buildings are situated at the back of Jackson Square mall and one wonders how people navigate to York Blvd. The mall has always been a bit of a maze. The location takes people from the “core” (King St) to almost a back road. The Salvation Army has a huge facility across the street and there were some interesting characters(see Bongo-Man). It would be great if the market could spill out onto James North to join the shops, restaurants and cafes.  Picked up The Fry Chronicles by Stephen Fry, a continuation of Moab is My Washpot-excellent autobiography.  Fry is culture in a nutshell.
Fated to not fully shake off the cold, things turned nasty mid-afternoon and took myself to bed where, with furnace blasting and electric blanket cranked, I lay shivering for two hours.  Done in by the samosa?  The Mexican beverage? The self checkout at the library? (there was something nasty on the screen) Took three hours to rally ‘round and doped myself sufficiently to the point where I felt human again.

Back to town and it dawns on me that I haven’t eaten since 1PM.  What to do?  McDonald's for a muffin.  There are not enough bytes for me to describe the urban McDonald’s night time experience.  Don’t think I’d do it justice.  I was owed change and there was a great debate to open the second till.  I think it’s safe to say management won’t mind.

(Editor's note.  Maybe a serialization of the Mcdonald's experience?)

Long line to get in to Hamilton Place.  The doors were replaced with sliding doors a few years back.  Only problem is, operating on a sensor as they do, when the line forms to get in the building or when the smokers take their break, the doors stay open and the cold and smoke are sucked back into the building.  Thus, we all become smokers for the intermission.  There does seem to be some money floating around.  Hamilton Place is undergoing a bit of a face lift.  Confusion, though, as those that wanted the Studio Theatre lined up for Hamilton Place and vice versa.  I think a couple of light bulbs would go a long way to help get people in the right building.  Lots of men in the audience!  Was curious what the mix would be.  A young  man dropped off five women and then got quickly out of Dodge.
I thought Swan Lake was  beautifully done and admired the dexterity of all the performers. If your knowledge of ballet extends to The Black Swan with Natalie Portman, do yourselves a favour and check out the Swan Lake touring schedule for this company and book some tickets.

Ballet Jorgen
Very personable dance group and they signed autographs after the show.  I watched the twelve swans and marvelled how anyone can stand still for ten minutes with one foot behind them, the other at ninety degrees to its leg, back somewhat arched and with both arms outstretched.

Home to chicken soup.  Naturally forgot about the time change and took an extra few hours in bed next morning.  Breakfast in bed was the order of the day.  Three hours of pre US election coverage on CBC. Realize I’ve spent an enormous amount of time on this election.  Barely spent five minutes on the Canadian Liberal debacle.  It’s just that since Grade seven, I’ve always been tremendously bored by Canadian history.  In grade seven I wanted kings and queens of Europe and was handed Quebec in the 13th century.  Dave surprised Morley with Mexican mint and that coupled with a story on Leacock’s pond, felt inspired to tackle the last of my gardening.  Only problem is that the garden is alive and kicking. 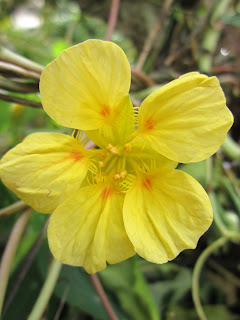 Spied a nasturtium in bloom on a plant that had been ripped out of its pot two weeks ago.  A blue jay swooped in to munch on the sunflower seeds.  Hollyhocks, Phlox, Gallardia, Livingstone Daisy, Sedum still in flower. 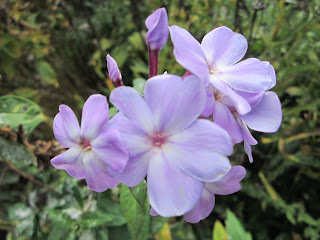 Took a coffee break in the patio chair and surveyed the “Property”.  Planted bulbs and noticed some of the existing bulbs had already sprouted by an inch. Long wait ‘til March. 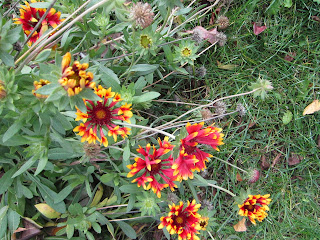 Thinking that it was an hour later than it was, made haste to call it a day.  Wachtel in mid interview so after the brain worked out what the real time was (I blame the drugs) reset the clocks(why do we have to change the clocks in the first place?)and paid a visit to the Stoney Creek Battlefield House-battle ground, in part,  of the War of 1812. The grounds have recently undergone landscaping.  Stoney Creek hosts an annual reenactment in June.

The back of the house... 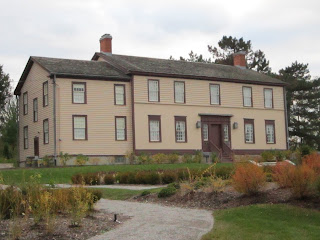 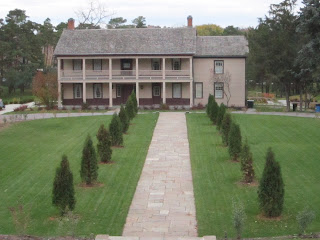 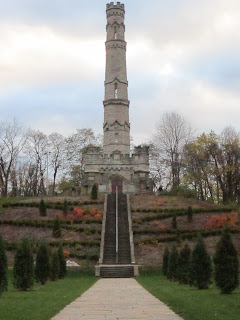 A couple were having Engagement photos taken at the top of the stairs.  The new trend-engagement pics.  I feel the photos need to be taken when you’re in the moment, not weeks or months later and you have to recreate the feeling just so you’ll have a book for guests to sign at the wedding.  If you’re going the picture route, have the photographer on site, hiding in the bushes somewhere with a suitable lens.  Wedding business has gotten way out of hand.

Thought for the day:  If you took as much time planning your marriage as you did planning the one day party that is your wedding, chances of a successful marriage increase a thousand fold.

Took the Pater’s advice-single malt to finish the day.  No need for the furnace.