6 AM
Sound of gentle rain on the window.
Are the car windows down?  Indeed they are.
Scramble for some clothes and out to the parking lot.  All is well.

7AM
Someone's at the cutlery again.  Is this the day to polish the silverware? Now is perhaps not the time.

9AM
A couple of new faces at the breakfast table.  Wisconsin and North Bay.  Guests preoccupied getting the WiFi up and running.   Wisconsin octogenarians-she has an arts degree and rents studio space where she churns out paintings; husband choosing not to know what she gets up to in the studio. Interesting conversation about the greying of the theatre crowd.  Not just how to get "bums in seats", but how to get young bums in seats. (It's the grey hairs that have the time and the money.) The Ottawa couple collect sculpture.  North Bay rather quiet-we swapped allergy remedies.  The Montrealer has her voice back.  Apparently Maggie Smith's appearance went down rather well.  Very gracious, we're told.  Ham and cheese stuffed pastry this morning.  Delicious.

Showered, packed and paid up.  Rain persists.  Over to town to pick up the latest acquisition for the kitchen.  Good browsing to be had in Stratford.  They have everything.  Someone commented that they like the "real" town here unlike that other theatre town where they feel everything is staged.

Coffee to escape the wind.  Have yet to replace my Totes umbrella since it was "liberated" from me in Huron County last June.  I have been suffering with an inferior product ever since. 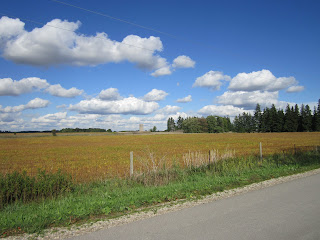 The plan was Line 4 to the bison farm and then down to Aylmer and Sparta to find Steed & Co.  As the name suggests, they raise horses but they also have a hikeable forest and they grow lavender. 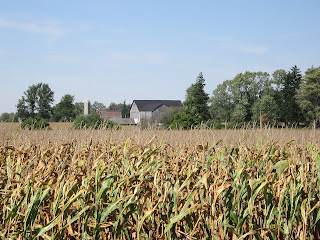 I was less than enthusiastic with the weather situation.  Will we transition to the Autumn unlike last Spring? I did not wear a jacket this year.  Parka to T-shirt in 24 hrs.

Dawns on me that I've left the Bombay in the fridge.  Over we go.  Most people disagree with me on the necessity to chill the drinks.  There's little room in my fridge for essentials like juice and milk what with most of the real estate given over to the alcohol. (Before assumptions are made, I'm a one drink a weeker[vacation exception, of course] and have recently given up on the midweek wine with dinner intake.  Just want to clear that up.)

Off to Shakespeare for pies for the Pater and to find the flagship store of Harry Ten Schilling.  Conditions had turned bleak and homemade soup was just the thing.  This Harry store is larger than Stratford and also houses an antiques shop and clothier amongst other things.  I waited for the two "ladies who lunch" to show up but they did not.  Good soup-vegetable and spices to counter the arctic like conditions outside.

Had a chat with a couple up from London.  They were on route to Bayfield.  I spent the afternoon there last year and really enjoyed it.  Did the Huron County run last year-Goderich/Blyth/Wingham/Point Clark/Goderich again/Bayfield/Grand Bend/Exeter.  Recommend The Black Dog Village Pub & Bistro at Bayfield (beet salad with a nice glass of rose) and Thyme On 21 in Goderich-good creme brulee. 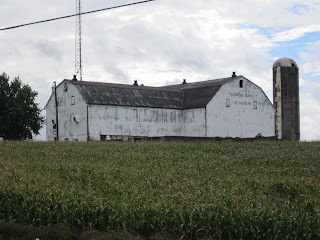 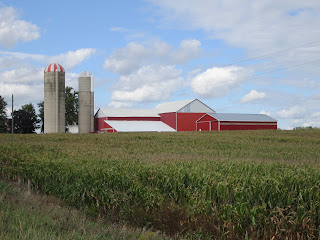 Tea pot was drained and spent the rest of the afternoon in brilliant sunshine.  Retraced steps to St. Mary's.  Look for Klomp's garden centre on the left.﻿  Good selection.  On through Rannoch and cross to Line 4. 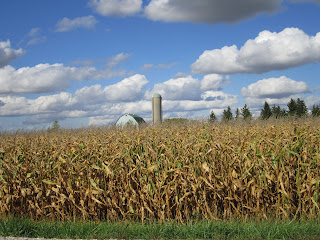 Nice stretch of fully paved road.  Corn everywhere. Quiet.  No one attached themselves to my bumper.
﻿ 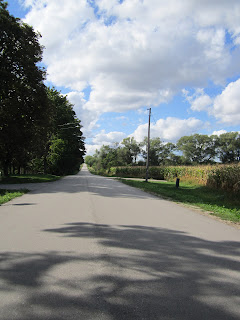 Blanbrook Bison Farm is #5679 so you'll be travelling a fair stretch before you come across it. Enjoyed the sausage picked up at the Garlic Fest and thought to try the filet this time.
Met the family dog but no one else home.  A later email from the family tells me that most days after 18:00 are best and that they are also down at the London Farmers' Market Saturday mornings.  They do sell heads so if you have a Man Cave that needs that little something, consider a Bison head. 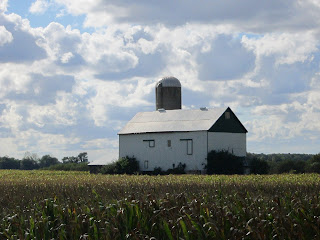 Double back to take a closer look at the grave stones I'd just passed.  No signa﻿ge  and I have yet to find out the who/what/where. 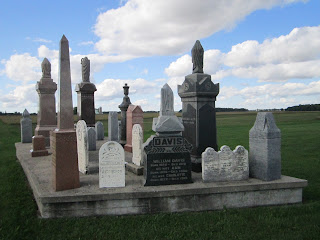 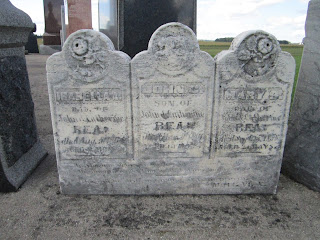 Apart from the stones, corn figured prominently throughout the day.  Lots of corn but is it any good given the weather?
If you're in this neck of the woods, take #7 to the Lucan area and make the trek to the Donnelly grave.  The original grave marker has been removed and there is a modern stone in the yard.  If you like your mystery/history, read the following account of the Donnelly saga and massacre.
http://www.donnellys.com/History.html
Down into Oxford County to Thamesford and Ingersoll.  Enjoyed the run but decided to do the Southern leg of the trip another day as the sun would soon be setting.  The jam would have to wait.
Closer to home and went to fill the tank. Mistake #3.  Pulled up behind an enormous pick-up.  The kind that comes with an extension ladder so you can climb into the thing in a timely manner.  Gas station designed with three pumps, the diesel being in the middle.  You cannot access the other two pumps if someone's at the diesel as this one was.  I do not exaggerate here and it's not paranoia, but there was no doubt that the driver released pressure on that pump and filled that tank as slowly as possible.  He finally climbed up the ladder into the cab and sat there.  (I think he did his income tax return while I waited.)  Eventually he pulled away, did a tour of the perimeter and drove out of the station with his partner, who failed to conceal her smirk as she looked my way.  I repeat-not paranoia.
Welcome back to Suburbia.  Where to next?