What in the name of arse?

Vacation week and after two early starts Monday and Tuesday thought a lie in was in order. Little did I know that my neighbour had other ideas. He is normally an early riser but chose Wednesday to get up at the crack of dawn to begin the masonry work for his front walk. Seniors in my neighbourhood don't turn over and go back to sleep. I think if I ever see retirement, I'd go the lie-in route.

Stirred from a blissful slumber by the cutter I resigned myself to another early start.  Breakfast in bed sounded good and besides the dry wall dust still coated the dining room table. I was scheduled to meet my London counterpart for luncheon but I consumed the Full Monty and one of those mega muffins that loom large in the bakery. (The price went up thirty cents after they started wrapping them in the little brown cooking papers! The price of aesthetics.)

Stratford bound again- this time for the theatre.  After several years of theatre going you finally get to a point where you know what routine works best.  You can cram your schedule with half a dozen plays, sightseeing, shopping and eating (desperately trying to stay awake during the first fifteen minutes of the last show because the exhaustion is finally setting in) or choose some evening shows and allow yourself the whole day for R & R.  This is a vacation after all not boot camp.

This year stayed away from Shakespeare, but Wyn Davies was in Cymbelline and that's enough of a draw to keep it in the back of my mind for three days.  Also wanted to see Elektra because I'd recently listened to an interview with Anne Carson who did the translation.  Greek tragedy? Perhaps not.  Keeping it light, chose The Matchmaker by Thornton Wilder and Best Brothers by Daniel MacIvor.

Half a dozen trips to the car-scheduling myself around Q this morning.  Salman Rushdie and Deepa Mehta talking about their new movie-Midnight's Children. Rushdie has one of those voices you could listen to all day.  Sadly, the price on his head has recently increased.  Previously on Q this week-Catherine Keener and Christopher Walken (The Late Quartet)-two of my favourites.  I think it behooves a host to make an effort with interviews.  Guests must get sick of answering the same questions over and over.

I'm actually enjoying this 401 thing.  Farmland north and south.  And, yes, the sun was out.  (Of course the sun is always out, it's the cloud cover that's the critical factor.) 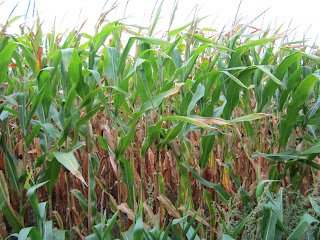 I had a vision for lunch.  The vision included an ice cold martini (perhaps a few stray ice chips in the glass; four olives) followed by something really tasty-there's a good Thai close to the office or samosa and butter chicken from The Raja.  This did not happen.  We went to the local diner which is presently under renovation.  Dust everywhere and half way through the meal someones sander blew out and the room clouded over.  My lungs haven't been the same since.

After a less than stellar lunch, made my way North via #4.  Mistake number one.  What would be the ideal route?  #4 runs N, NE, E then N and changes names five times.  It takes you right through town and unless you're looking to tour the back lots of both the Salvation Army and Goodwill, I suggest alternate arrangements.  #4 passes right through the core, which is bottle neck, and UWO.  If it's food you're after, this would be the spot.  Traffic is appalling, though. 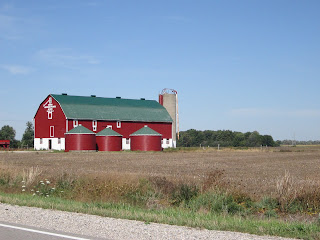 Finally hit countryside.  Good time of year-fields a little ahead of the trees with the colour change.
Corn everywhere. 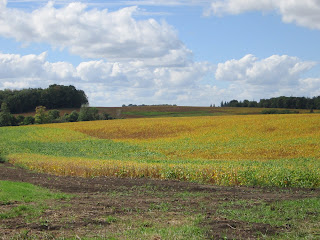 Headed along #7 toward St. Mary's.  Construction and one lane of traffic at times.  It's 80 kmh here but the mini van behind me was determined to reach 100 kmh.  Despite the open road ahead of me and no double yellow lines, the van would not overtake.  What are you waiting for?  We drove like this for miles .  There was no rationalizing the situation.  Perhaps they didn't have a map and were straining to read mine.  Forced right for a detour, I pulled over-defeated.  Blood pressure rising, I stepped out of the car and with a wide sweep of my arm, like a host inviting guests to make themselves comfortable, gave the road over to the van.
St. Mary's for a stress break.  Mistake # 2.  School had just got out and there were swarms of yellow buses everywhere.  Cold drink and a walk.  Found the Arthur Meighen statue.  The gardens at the Festival Theatre are named after him. 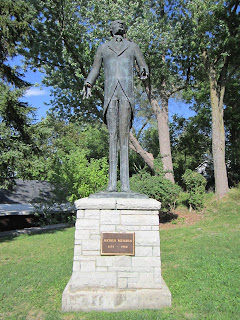 Work crew on the bridge so missed the waterfront.  St. Mary's is very picturesque.  Nice riverbanks, shops and a swimming hole in the old quarry. Big cemetery. 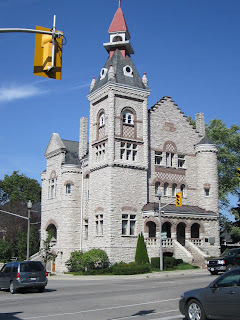 Checked in later than usual.  Always go with A Cottage on Brunswick  which is very unassuming from the outside  but has been gutted and refurbished inside.  Aurelia is a wonderful host and she prepares a great breakfast.  The cottage is central to all  theatres and it's a short walk to town. 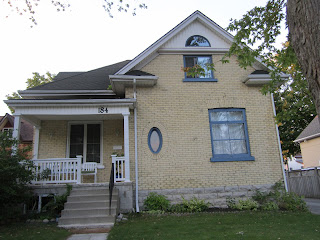 Most of the gardeners in Stratford have given up on grass and fill their front with flowers and shrubs. 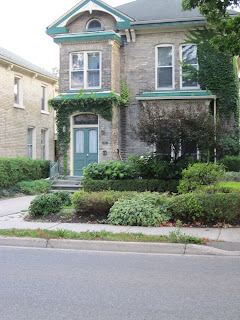 Quick change and had a walk 'round town.  Let Them Eat Cake is in a new location.  They do breakfast, lunch and dinner and of course enormous cakes and pastry.  Burned off the scone walking to the Festival Theatre for The Matchmaker-which is still playing until October 27.  Good fun.  Great cast.

News & TVO-"Why does the sky get dark at night?"  Deep thoughts after a long day.  Now where did I put those ear plugs?