Expectations met.
Room temperature juice, Frosted Flakes (my gums are still aching from the sugar), two boiled eggs that had been run through the deflavourizing machine, a tea biscuit and a pot of coffee.
As you know, no TV on the home front so indulged in a little HGTV.

Cooler than expected and a threat of rain.  First stop the Bleasedell Boulder.  The Lower Trent Conservation is a nice spot with easy hiking.  Met a father, son and dog (off its leash, but I refrained from saying anything which is unusual for me) rambling in the woods.  Two short hiking trails to choose from. 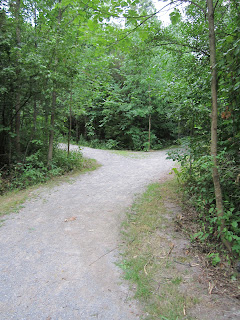 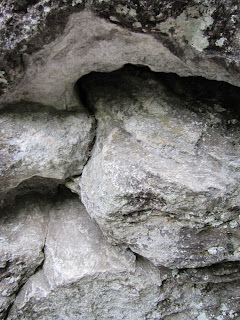 Debated how much weight the trunk would hold.  Some nice rock specimens that would look good in the garden.

On to Frankford through the spitting rain.  Not a great deal in the core.  Lots of fishing spots; an island conservation area. 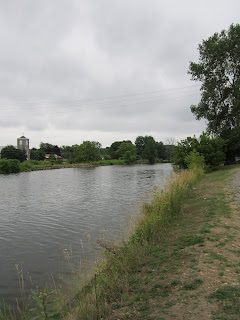 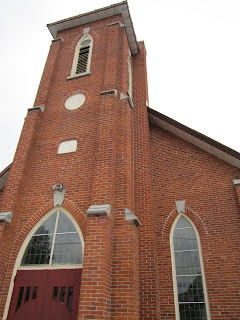 Great drive through the rain to Stirling.  Crumbling barns and farmyards.  Very reminiscent of English countryside-sheep grazing on rolling hillsides. 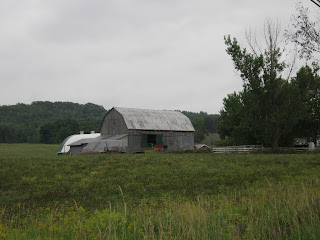 By now, the pot of coffee had worked its way through the system and first task was the WC.  Times like these one appreciates the ubiquitous Hortons.  Time was a WC at Tims was a nightmare and strictly for emergency purposes.  Things have come a long way.  Not too many Tims in the North-this is a good thing.  Try to support the local coffee shop.  (Side note for Mitchell in Perth County-cannot recommend the local coffee or tea-vile; they do bake enormous doughnuts so if a sugar rush is your thing... )  Try West Wings Espresso Bar.  A curious coffee house-cappuccino, new & used books and clothing all under one roof.  A lot of square footage.  Fair trade coffee.
Walked around in near drizzle.  A variety of shops, the Stirling Creamery, water space, town square-nice gardens; the War Memorial.  Everyone should visit their local War Memorial. 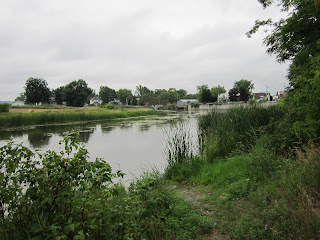 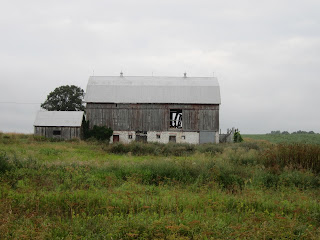 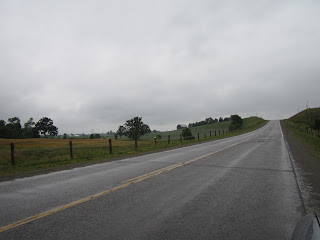 Back to farm country and Campbellford.  Beware the traffic light system.  You will need lots of patience to make the left turn over the Trent bridge.  I do like the old lights though.  Throughout the counties you have the discreet traffic lights of yesteryear which I like because the modern city lights are an eyesore-sometimes four to an intersection.  Not one but two Chinese restaurants- didn't think the population could sustain both.  Settled on the Chinese because, after waiting a coon's age for the traffic light to change,  I ran out of time to consider options on the other side of the bridge. Curse my cappuccino dependency!
Went with the Ming Star. Key draw at the Ming is the noon hour buffet.  The place cleared out at 14:00 on the dot.  Went with the egg roll and curry which somehow got brought at the same time.  They brought the soup and mains together at another table. Curious cast of patrons-father and son eating in silence-spied a sausage on somebody's plate.  Man on the left discussing his schizophrenic bass player.
Curtain rods about to collapse under the weight of the drapery, landscape and horse prints on the walls-no doubt inherited from the previous owners.  Carpet buckling underfoot which must surely be a trip hazard.  Christmas decorations?  Surprisingly, the food was more than palatable.
Walked over the bridge this time to the riverbank and Campbellford's claim to fame-the big Toonie. 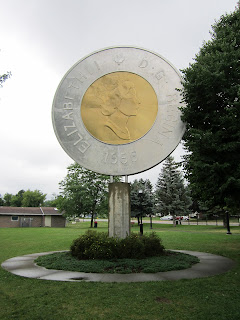 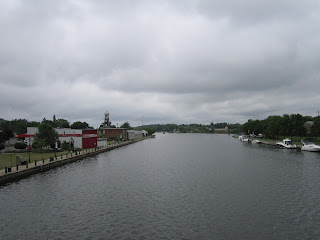 Back to the car and the rains came down.  On to Hastings.  Slightly smaller version of Campbellford.  Easier to get over the bridge here.  Some very nice waterfront spots.  The plan was Kawartha ice cream but this was abandoned with the rain and "cold". 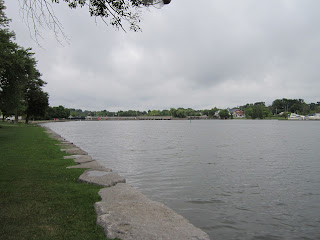 Turned onto Concession 13/Water Street heading out of town and came across one of the quietest spots in Ontario.  Gorgeous countryside. 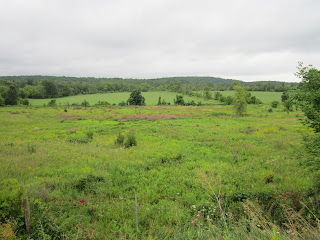 Last stop was the village of Warkworth.  A nice stop for, you guessed it, coffee.  Small trail system which was created for the Centennial project.  A few shops very much geared up for tourists.  Streets and buildings clean and tidy.  And yes, another kitchen supply store.  Finally laid my hands on a jar of preserved lemons. (More about the lemons in an upcoming food post.)   McGarrigles mustard with port and champagne.  Scooped up a few jars for the Pater.  Interesting to note the price of whisks.  In Campbellford- $1.99; the same one here is $3.99.  Good spot for coffee-The Supreme Bean.  Purveryors of objets d'art and garlic of all things. 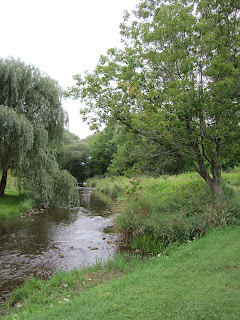 Back to Trenton via Wooler.  The rain persists.
A shower, a G & T, William & Mary with Martin Clunes.  Exhaustion setting in two hours earlier than last night.  Looking forward to those eggs!!